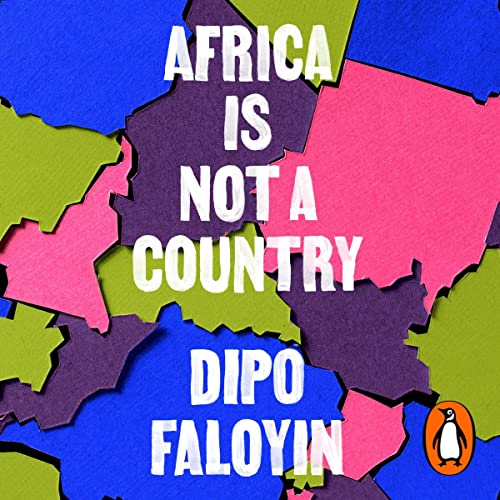 Africa Is Not a Country

Africa Is Not a Country is a kaleidoscopic portrait of modern Africa that pushes back against harmful stereotypes to tell a more comprehensive story.

You already know these stereotypes. So often Africa is depicted simplistically as an arid red landscape of famines and safaris, uniquely plagued by poverty and strife. In this funny and insightful book, Dipo Faloyin offers a much-needed corrective, creating a fresh and multifaceted view of this vast continent.

To unspool this inaccurate narrative, Africa Is Not a Country looks to a wide range of subjects, from chronicling urban life in Lagos and the lively West African rivalry over who makes the best Jollof rice, to the story of democracy in seven dictatorships and the dangers of white saviourism and harmful stereotypes in popular culture.

It examines how each African country was formed, by white European explorers who turned up with loose maps and even looser morals, how 90 per cent of Africa's material cultural legacy was stolen during the colonial era, and the fight to get those artefacts back.

By turns intimate and political, Africa Is Not a Country brings the story of the continent towards reality, celebrating the energy and fabric of its different cultures and communities in a way that has never been done before.

What listeners say about Africa Is Not a Country

not the book I expected

I listened to this book expecting to learn how Africa is not like the stereotypes portrayed through Western history and media. I expected to come away knowing more about the countries, the people, and cultures.

What I actually came away with is a deeper understanding of some of the atrocities imparted on Africa by Europe and North America. As noted, these were atrocities and they need to be addressed, but I do feel the author has missed an opportunity to share his knowledge of modern day Africa, of what makes it a great continent, and what is the real Africa.

For example, the author spends a long time talking about how badly Africa is portrayed in Hollywood films and how this is not reflective of Africa. Other than a relatively brief reference to Black Panther, the author misses the opportunity to promote the real Africa and how Hollywood could make better, more appropriate films.

There are other examples where the author focuses on what went wrong and what is wrong, not what is right, or good.

Or maybe I just missed the point of the book.

Must read or in this case listen.

Firstly, love listening to audio books read by the author. It just gives each word so much power. Secondly, this is a powerful piece that I hope everyone takes the time to engage with - especially those who don't know Africa and it's 54 nations. Life has changed since your geogrpahy and history lessons - educate yourself on how the media and people paint Africa with one brush has lead to social, economic and environmental consequences. And of course, focuses on how we can move forward if we just reshape our thinking. I will be using this book to support teaching Global Development in Geography.

enjoyed listening to this audiobook and its insight for a white audience into the history of colonialism and effects on the African continent, drawing out some of the nuances between its many nations.

So much more than I could have known.

I am a young Zimbabwean, who grew up in South Africa, now lives in London and whose work, research and passions are focused on Africa. I started the book with a scepticism at how Dipo would approach engaging with the continent and was quickly eased by well researched amd personal this work is. It feels like a tight mix of my best politics and IR lectures and the wealth of information and banter among africans on the continent and in the diaspora on twitter and social media. The writing is beautoful, poetic even, which makes for a soothing listen. Thank you for this work in which I felt seen. I hope similar books will be written for successive generations of young Africans to both engage with their histories and feel grounded in their present.

I love my country, and this book has made me fall in love with my continent. The content and delivery all astounding!

Great book, I couldn’t recommend this highly enough. Dipo should be so proud of what is a fantastic piece of work.

Yeah this was brilliant. Nodding all the way. All things you think but aren’t sure about confirmed here. A comfort that it’s all written out for the world to read and see and understand. Something I will use as a base for my teaching in Geography. This is a major resource. Brilliantly read. Probably better than reading it yourself.

Really loved it
Educated me about the untold history of the African countries.
Eye-opening...thank you

A brilliant discussion about Africa. Helping to breakthrough stereotypical thinking.
Everyone should read this book

An very detailed account of the historical issues caused by colonialism by 'superior' white people.

anyone with an interest in the African continent, in global history and development and in what our arrogant western frame on the continent is continuing to wreak havoc should read this insightful, unapologetic and well written book. Loved it.