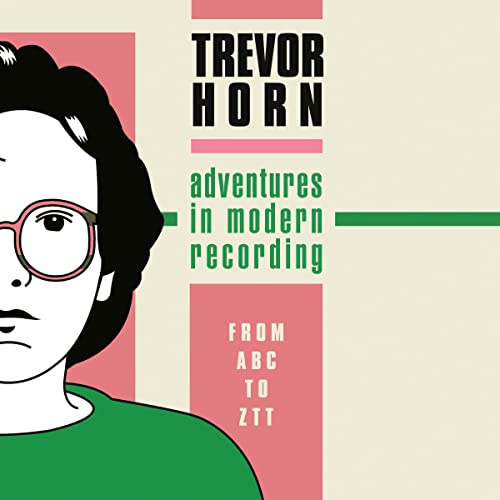 As a renowned recording-studio maven, Trevor Horn has been dubbed 'the man who invented the '80s'.

His production work since the glory days of ZTT represents a veritable 'who's who' of intelligent modern pop, including the likes of ABC, Frankie Goes to Hollywood, Paul McCartney, Rod Stewart, Pet Shop Boys, Seal, Simple Minds, Grace Jones and Mike Oldfield—among many others.

This book is Trevor's story in his own words, as told through the prism of twenty-three of his most important songs—from the ones that inspired him to the ones that defined him.

This play-by-play memoir transports listeners into the heart of the studio to witness the making of some of music's most memorable moments, from the Buggles' ground-breaking 'Video Killed the Radio Star' to Band Aid's perennial 'Do They Know It's Christmas?', via hits such as 'Relax', 'Poison Arrow', 'Owner of a Lonely Heart' and 'Crazy'.

Offering unrivalled access to the dark arts of the producer's world and the even darker arts of the music business itself, prepare for some adventures in modern recording....

What listeners say about Adventures in Modern Recording

So much I didn’t know!

I’ve always been a fan of Trevor Horn and his amazing use of new tech. I was aware of his work with Frankie. Grace Jones and a few more. But this excellent book has filled in so many gaps - I had no idea he worked with Dollar (!) or had worked for so long in so many bands before his career as a producer took off. It is fascinating to learn how tough the work can be with such a variety of musicians. As someone who used to engineer in recording studios, I can feel the magic in those places just as Trevor Horn describes it. A great book!

This is a engaging and informative account of how Trevor Horn became a uber producer during the 80's. as this was my era it's great to hear how these classic songs I still love were wrestled into life
Trevor narrates like you're having a chat down the pub and us very candid and honest about the ups and downs. could listen to more beyond this book. let's hope there will be more

Behind the curtain of the worlds greatest

What a joy it’s been, reliving my youth and finally finding out what really happened, we’ll according to Trevor Horn anyway. I bet a few people remember it differently…
Listening to his work produced through my life, I had created all sorts of ideas about how it happened. Turns out, his life, like mine and probably everyone else’s, was a lot less stage managed than I had thought. Lots of coincidences, luck, but ultimately a good ear, and recognising a opportunity when when is presented.
I was so very sad when it ended.
Can’t recommend highly enough.

I enjoyed this far more than I thought I would

‘Produced by Trevor Horn’ records have soundtracked the lives of so many of my vintage (fifty-nine…) so I was interested to hear the back story. You get a lot more. Trevor is a good writer but an even better narrator and his soft, North East burr makes it easy to imagine buying him a pint and asking: “So what was it like making the ‘Lexicon of Love’ and then letting him genially chunter on…

Understanding the finer details of recording technology and the mystical (to me) points about musical construction (bars, semitones, chords, beats-per-minute) is necessary to get the most out of the book and will make it required reading for musicians and home-recording artists. For the rest of us, it’s an engaging glimpse of how painstaking and exacting the craft of a record producer is and how it’s a craft entirely without rules: what works in one situation doesn’t work anywhere else.

What makes the book strong and ultimately relevant is Trevor conveys it’s ultimately about being fair, decent and doing the best job you can. By the end, I was just glad I can just listen to the final versions of his work as the process - being cooped up for months on end, starved of daylight and sleep - sounds like hell.

This man is a superstar

A great story of how hard work can bring success.
Happy memories and I loved it. Simple as that!

some great stories and great narration from the man himself. I heard him on the wireless back in 79and followed his career since

If you appreciate Trevor Horn’s work then this is solid gold. It’s all here ABC, Malcolm McLaren, Frankie, ZTT, Art of Noise etc.

Any music fan should get involved in this. A great window into the music industry and life of a producer.

Interesting insight into a great producer

Well read by Trevor Horn himself. Full of interesting anecdotes. As a music producer I found it very informative to learn about his process. Great Audiobook….