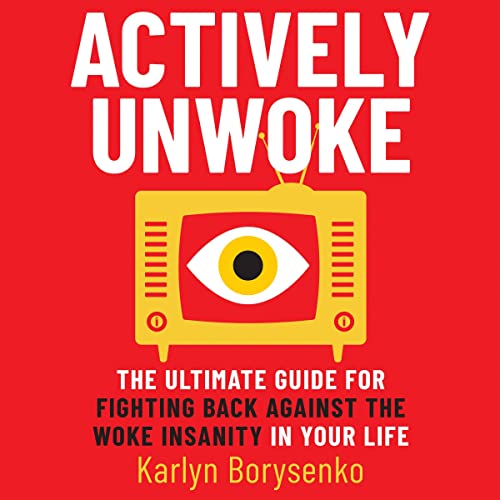 The woke have taken over every major institution in this country—the schools and universities, corporate America, the media, and the government. It’s time to fight back. Actively Unwoke will show you how.

For the last several years, we’ve watched as woke political activists have staged destructive protests, destroyed businesses, hurled accusations of racism and white supremacy around as if those terms mean nothing, and publicly bullied and canceled anyone who disagrees with them.

These authoritarians claim to represent social justice, but they are about one thing: power. Their goal is nothing short of cultural revolution. So what do we do about it?

Actively Unwoke explains what’s going on and decodes the language the woke are using so that you can understand what we’re up against.

To inspire you and explore actionable strategies you can take, Karlyn Borysenko looks at ways real people have fought back in the real world. This includes fighting back in the schools, knowing how to act when the woke come to work, taking a stand with your elected leaders, and even a few subversive strategies just for fun.

This book also reveals how to survive cancelation (yes, it’s possible) and how to take care of yourself as you join a ragtag group of misfits to do battle with the greatest existential threat of our time.

If you ever wondered what you would have done during the Civil Rights movement or in 1930s Germany, the answer to that question lies in what you are doing now. This fight isn’t about left or right, Democrat or Republican. It’s not about liberal values or conservative values.

This book will give you everything you need to join the unwoke army. It’s not enough to just be unwoke anymore—it’s time to be actively unwoke.

What listeners say about Actively Unwoke

Dr Karlyn Borysenko gives her invaluable guidance to fighting against the woke (the Marxists) who want to turn the USA into a totalitarian state. Keeping emotions out of conversation and matter of factly telling someone who’s woke, I don’t agree with what you’re saying. At that moment that’s all that’s necessary. This alone gives me a tool to deal with some family members or anyone who favors Marxism. I’ve always been silent in the past. I appreciate hearing this book in the author’s voice and feel it was delivered with confidence, wit and honesty.

Even tough the subject matter is of interest, this is but a very lousy and lazy effort to dismantle work culture. The wording is no better than a local watch rally, the interjections are unbearable and the audio sound is just amateur. No good.

Courage in the palm of your hand

Clearly lays out what Woke is and the consequences if left unchallenged. Then, the author goes further to lay out strategies, self-care, and a thorough reminder of the rights we have and the lengths individuals in the past have done to secure them. We fight not because it is easy, but because it is worth doing.
Well done, Karlyn.

It's the first non-fiction book I could finish. Great writing and narration. It helped me through difficult times and allowed to focus on what matters. Not only the book itself but engaging with the author.

Her testimony is remarkable. The book is sound and clear. Lord save us and provide all she needs to advance this counter revolution.

Karlyn provides thoughtful and actionable insight to help us as we fight to keep America a free country. She is open and honest and provides us with the strength to stay in this fight by providing tools! I looked for this to be on Audible for months and was pleased that she took control of making sure the book was read with the passion she has for the subject! Excellent narration.
Thanks Karlyn!

A truly actionable guide to fighting against the woke culture

FINALLY!! A truly absorbable book explaining the “woke” culture overtaking out country. This book is easy to read & listen to (narrated beautifully by the author), easy to understand, & filled with things every American can do get our country back on track. I recommend this book to everyone - liberals, conservatives, libertarians, anarchists, EVERYone should read this book. I am so grateful the author put so much into making this book what it is. I believe this book will be a very useful tool to many people.