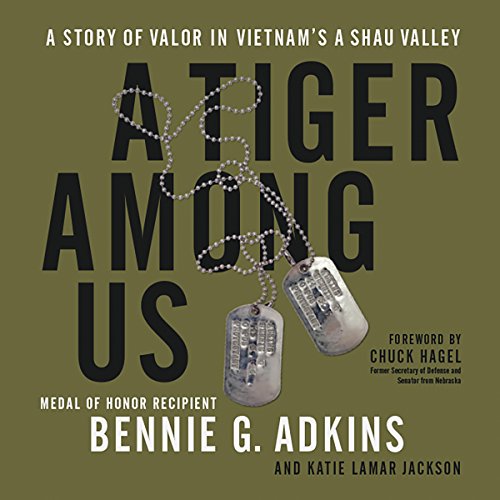 A Tiger Among Us

Foreword by Chuck Hagel, former Secretary of Defense and Senator from Nebraska

Adaptable. Cunning. Ferocious. Fearless. The Indochinese tiger is just one of the formidable predators roaming Vietnam's jungle. In 1966 a small band of US Special Forces soldiers - most especially Bennie Adkins - spent four grueling days facing down the "tiger" among them.

While the rain and mist of an early March moved over the valley, then-Sergeant First Class Bennie Adkins and 16 other Green Berets found themselves holed up in an undermanned and unfortified position at Camp A Shau, a small training and reconnaissance camp located right next to the infamous Ho Chi Minh Trail, North Vietnam's major supply route. And with the rain came the North Vietnamese Army in force.

Surrounded 10-to-1, the Green Berets endured constant mortar and rifle fire, direct assaults, treasonous allies, and volatile jungle weather. But there was one among them who battled ferociously, like a tiger, and when they finally evacuated, he carried the wounded to safety. Forty-eight years later, Command Sergeant Major Bennie Adkins's valor was recognized when he received this nation's highest military award, the Medal of Honor.

Filled with the sights, smells, and sounds of a raging battle fought in the middle of a tropical forest, A Tiger Among Us is a riveting tale of bravery, valor, skill, and resilience.

"Of the millions of men and women who have fought America's wars, only some 3,500 received our country's highest award for gallantry, the Medal of Honor. There's just one way to earn it - the hard way. Command Sergeant Major Bennie Adkins tells us what it takes. A Tiger Among Us puts you right in the middle of desperate close combat in the heart of the Vietnam War's deadly A Shau Valley. What does it really mean to battle a relentless enemy 'above and beyond the call of duty'? Bennie Adkins knows. Read this book and you will, too." (Lieutenant General Daniel P. Bolger (US Army, Ret.), author of Our Year of War: Two Brothers, Vietnam, and a Nation Divided)

"In his magnificent memoir A Tiger Among Us, Command Sergeant Major Bennie Adkins proves that he is as talented a writer as he is an intrepid warrior. He has penned a gripping, minute-by-minute, hour-by-hour account of one of the most intense Special Forces battles of the Vietnam War. This is a powerful, riveting story about valor, comradeship, and self-sacrifice in the deadly A Shau Valley. A must-read for all soldiers, scholars, and students of leadership!" (Colonel Thomas R. Yarborough (USAF, Ret.), author of A Shau Valor and Da Nang Diary)

"The heart of Adkins's memoir is a blow-by-blow account of a vicious, four-day battle in 1966 in the densely forested and notoriously dangerous A Shau Valley...[it] will be of interest to those seeking tales of the hell combatants went through in Vietnam." (Publishers Weekly)

What listeners say about A Tiger Among Us

The Audie Murphy of the Vietnam War! Outstanding book! I spent two years in Vietnam flying helicopters in 1968 and 1970. I worked with the 5th Special Forces Group on a few occasions. Simply put they were living legends!

If you want to read a good personal narrative about Vietnam try "Taking Fire" by Ron Alexander.

What a true stud this guy is. Most deserving of his medals. I say that because he has several! This is a gripping story that I couldn't put down once I started! Well done sir. Thank you for telling your story and your service to our country. God bless

nothing more to say but i have to have 15 words minimum in my review
slow story
unnecessarily repetitive
voice actor - was that a real accent?

Excellent tale of a patriot, honor and duty

Finished the book quickly. The story was told in layers by different participants and backed with AAR's which lead to the book having depth. Also enjoyed the parts that was read by the author. His reading of the tale was like we was having coffee at an ops table. He let us inside, inside a brave honorable mans life.

Story: Not only is this battle recounted in interesting detail, particulars about Green Beret training are interestingly and captivatingly described.