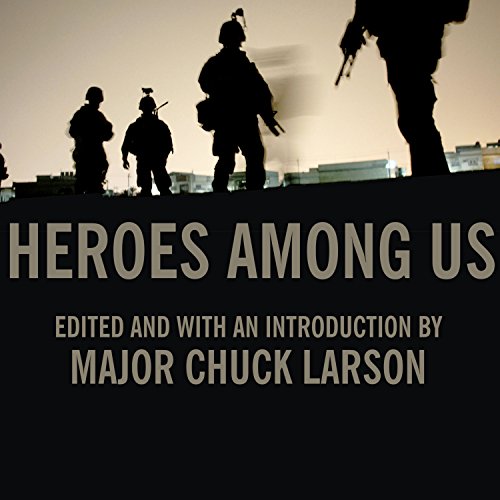 By: Chuck Larson
Narrated by: Lloyd James
Try for £0.00

A U.S. Army major who served in Iraq during Operation Iraqi Freedom presents 29 true stories of courage from the frontlines of the current wars in Iraq and Afghanistan.

Over one million Americans have served in Iraq and Afghanistan in the past four years, but fewer than 500 from this group have earned a Silver Star, Navy Cross, Air Force Cross, Distinguished Service Cross, or the Medal of Honor. Those who have been awarded these distinguished honors all demonstrated an extraordinary courage under fire in the worst of circumstances.

These Americans come from all branches of the military. They also come from all over the country and all walks of life, representing the entire spectrum of races and creeds. But what unites them are their deeds of consummate bravery, beyond the call of duty. Heroes Among Us tells their extraordinary true stories of valor, honor, and sacrifice.

" Heroes Among Us transcends politics and ideology and will inspire us all." (General Richard Myers, former chairman, Joint Chiefs of Staff)
"This book is an extraordinary testimonial to both heroism and humanity. These accounts are powerful reminders of why Americans in uniform deserve our respect, our support, and our gratitude." (Senator Joe Lieberman)

What listeners say about Heroes Among Us

These interviews really gave you a feel for the intensity of the action over there! These guys are tough as nails!

Incredible stories of Bravery from our Soldiers

This book captivated me from the very beginning. I even hid listening to it at work it was hard to stop . I laughed , got choked up, and even got angry at times at the stories of war and heroics . AMAZING book and I highly recommend it to anyone that enjoys books on war and our soldiers selflessness and heroics told by the men themselves .

Ah my brother's, where art thou

It's good to here these stories. I had the pleasure of living twelve years of my life with these people. I miss them.

This is a true account of a few of the men and women who fought in and some who continue to fight in Afghanistan and Iraq. The book also tells us about the acts of valor that our warriors did for the freedom of their country, the USA. Many interviews were conducted with the receivers of these medals themselves, their loved ones and the men who served with them. There were two Medal of Honor recipients who were killed in action.

America's heroes usually do not think that any actions taken during a particular battle should have honored them with a medal of valor. They'll say that all of the men who fought this battle with me deserve the medals. Because without them, the battle could never have been won. The men and women who fight together consider themselves brothers. There is nothing they would not do to save one another.

One Medal of Honor victim threw himself on top of a grenade to save his men. Yes, they experience fear but I've read so many times that when these men enter a battle the fear disappears and they concentrate on fighting the enemy. However, if they see a comrade in trouble, these same warriors will protect a brother, resulting in his own injury or his own death.

These accounts will give you just a small taste of what the war was like for a handful of men and women. They tell the interviewer what occurred. The narrator did a great job making the book an easier listen. Each remembrance explains some parts of the battles they fought and how they definitely are potentially facing their own death each and every time they faced the enemy. I think I would like to read this book again to give myself the opportunity to once again hear about and understand what the member's of our military do to keep us safe and free. I say Thank You to our military.

A great book seeing the chaos through the tellers war stories. At many times had my blood pump putting selfess in these heros shoes. we have lost many great men and women. To hear these stories is an honor. Thank you for yourselflessness.

Obviously this story is about some very, very brave people. My problem was it was like a long list. Each person's actions was fascinating and amazing but it was still a list. The author wanted this format but I think the book would have been better if the story linked the action between the people with other historical events rather than just dates. It is still worth listening too, for the bravery displayed.

Pretty Good if not a bit depressing

Great book for getting to know some of the military personnel who have served to keep this Nation great. The narration is good but the book comes across a bit anti-warish. The more depressing parts of the battles are emphasized. Worth listening to.

Major Chuck Larson does a great job at objectively telling the stories of these real hero's. Too often hero's are categorized as actors or athletes and our society forgets who the real hero's are. We need to recognize and thank them for their sacrifice to our nation.