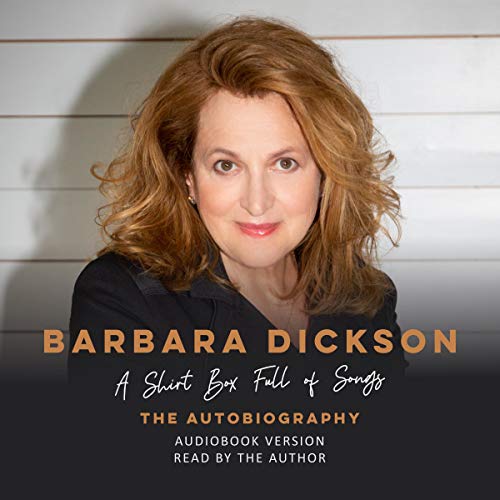 A Shirt Box Full of Songs

First published in 2009, this edition of Barbara's autobiography, A Shirt Box Full of Songs has been expanded and revised with several new chapters bringing her story completely up to date.

From singing to the postman when she was less than two years old to her sell-out tours today, Barbara Dickson has been captivating her fans for the best part of 70 years. In her autobiography, she describes the joys of growing up in Fife in the '50s, of moving to Edinburgh at 17 to find her place in the world and the struggles of trying to make a living on the Scottish folk scene.

Despite becoming Scotland's best-selling female album artist of all time and having huge hits such as "Answer Me", "Another Suitcase in Another Hall", "Caravan Song", and "January, February", Barbara was not content to have just a successful singing career. After being a regular on prime-time television, she took to the theater, making shows like Blood Brothers and Spend Spend Spend her own. Her hugely successful time on stage earned her many acting accolades, but her pursuit of perfection led to complete exhaustion from which she fought hard to recover.

Barbara's talent and quiet confidence continue to win many people over; here she talks about those she encountered on the way such as Billy Connolly, Gerry Rafferty, Willy Russell, Andrew Lloyd Webber, and Tim Rice. The result is a warm, fascinating story that encompasses the best of British music, stage, and television, and above all, tells the story of an ordinary woman with an extraordinary ability.

Originally published in 2009, this edition brings us up to date. New chapters detail her latest work on the stage and in the studio, along with her return, north of the border, to Edinburgh.

What listeners say about A Shirt Box Full of Songs