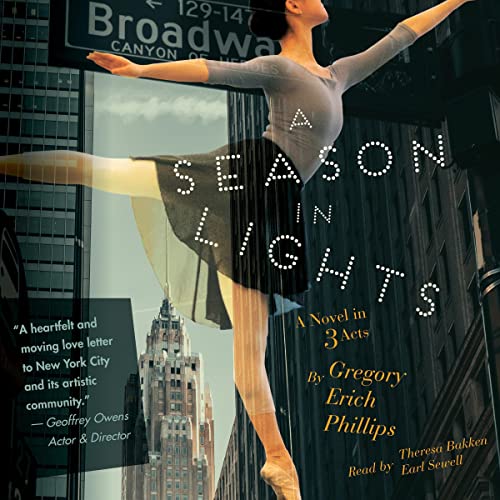 A Season in Lights

Passion, ambition, and escape in the colorful artistic underworld off-Broadway

Cammie, a dancer in her thirties, has just landed her first part in a show since coming to New York City. Yet the tug of familial obligations and the guilt of what she sacrificed to be there weigh down her dancing feet. The early narrative follows the cast of the show, with a backstage glimpse into the chaotic and colorful world of struggling performers.

Cammie’s lover, Tom, an older piano player, came to the city as a young man in the 1980s with a story eerily in tune with Cammie’s own.

Through their triumphs and failures, both learn the fleetness of glory, the sweetness of new love, and how a dream come true isn’t cherished until it’s passed. The bright lights of the stage intoxicate, while degradation and despair lurk close behind the curtain. Their stories are marred by two viruses, AIDS in the 1980s and COVID-19 today, both of which ravaged the performing arts community, leaving a permanent scar on those who lived through them.

Cammie thinks she finally has her chance in a major show, until COVID forces the unthinkable—Broadway being shut down. The physical, financial, and emotional toll this takes on the dancers and musicians of the story is laid bare. The effort it took to survive even the next day in New York City becomes a stark reality for many of the characters.

What listeners say about A Season in Lights