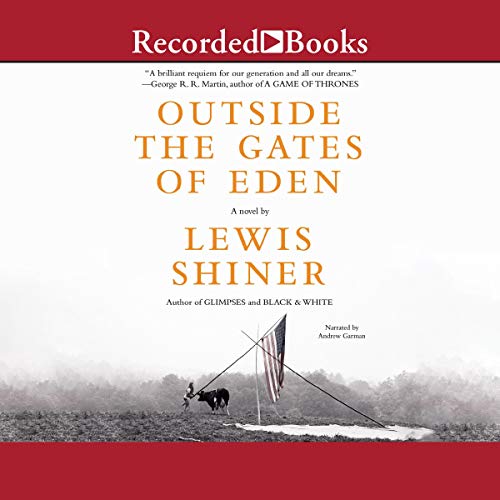 Outside the Gates of Eden

By: Lewis Shiner
Narrated by: Andrew Garman
Try for £0.00

"Outside the Gates of Eden is a powerful piece of work. Shiner writes about music, and the making of music, better than anyone I know. He gets across the tremendous excitement of the early days of rock and roll, the peace movement, Woodstock and the Summer of Love - but also the heartbreak of failure, betrayal, and loss. The prose is terrific, and the sense of time and place is first rate. A brilliant requiem for our generation and all our dreams." (George R. R. Martin, author of A Game of Thrones)

What happened to the idealism of the 1960s? This question has haunted a generation. Outside the Gates of Eden follows two men from their first meeting in high school to their final destination in the 21st century. Alex is torn between his father's business empire and his own artistic yearnings. Cole finds his calling at a Bob Dylan concert in 1965. From the Summer of Love in San Francisco to Woodstock, from campus protests to the SoHo loft scene, from a commune in Virginia to the outlaw country music of Austin, the novel charts the rise and fall of the counterculture - and what came after.

Using the music business as a window into half a century, Outside the Gates of Eden is both epic and intimate, starkly realistic and ultimately hopeful, a War and Peace for the Woodstock generation.

What listeners say about Outside the Gates of Eden

Once upon a time in america

I hung in there hoping for some insight or character development.. But its judt a dull trudge thru America since the early 60s tp the prrsent day using cardboard characters and fairytale relationships. In the end i thought why? .