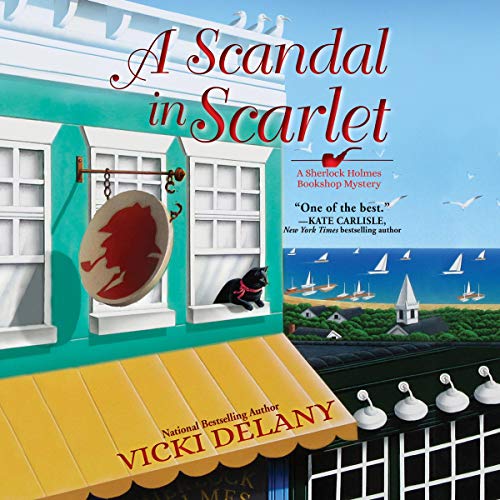 A Scandal in Scarlet

Before the gavel can fall, museum-board chair Kathy Lamb is found dead in the back room. Wrapped tightly around her neck is a long rope of decorative knotted tea cups. Gemma's boyfriend in blue, Ryan Ashburton, arrives on the scene with Detective Louise Estrada. But the suspect list is long, and the case is far from elementary.

Does Kathy's killing have anything to do with a mysterious death seven years ago? Gemma has no intention of getting involved in the investigation, but when fellow shopkeeper Maureen finds herself the prime suspect, she begs Gemma for help. Ryan knows Gemma's methods, and he isn't happy when she gets entangled in another mystery. But with so many suspects and so few clues, her deductive prowess may prove invaluable.

What listeners say about A Scandal in Scarlet

Another excellent addition to a great series

In A Scandal in Scarlet by Vicki Delany, Gemma Doyle is exhausted after a long day working at the Sherlock Holmes Bookshop and Emporium, which she co- owns with her Uncle Arthur. But her dog, Violet, has no mercy on her, insisting on a walk, so the pair go out, only to see smoke, causing them to rush to the West London Museum, a living history museum located in a historical house, which gets destroyed. To raise funds for the museum, the community of West London, in Cape Cod, puts on an auction, with each merchant on Baker Street donating valuable items. This includes a valuable first addition of Conan Doyle’s The Valley of Fear owned by Uncle Arthur, with an opening auction bid set at $12,000. To support the museum, Jayne Wilson, Gemma’s best friend and the co- owner of Mrs. Hudson’s Tea Shop, connected to the bookstore, has volunteered the tea shop to host the auction, complete with tea and scones for the people who have paid to attend the auction.

Then the day of the auction arrives, with Mrs. Hudson’s Tea Shop’s being packed to the rafters with rich people eager to spend lots of money to support the museum. Maureen McGregor, the meanest woman on Baker Street and biggest enemy of the Sherlock Holmes Bookshop, shows up with a sloppy, poorly painted picture to donate from her Beach Fine Arts store. Kathy Lamb, chair of the board of the West London Museum, sees the painting as an insult and tries to reject it, finally agreeing to accept it for a starting bid of $1.25. When Kathy is found strangled in the storage room as the auction is supposed to begin, Maureen finds herself under suspicion and asks Gemma to investigate, using what Gemma identifies as the oldest play in the book, challenging Gemma’s detective abilities, to get Gemma to agree. Since Gemma is dating Detective Ryan Ashburton, her butting into his case leads to the possibility of tension with him and also his partner, Detective Louise Estrada, who already has a personal vendetta against Gemma.

I have thoroughly enjoyed the Sherlock Holmes Bookshop Mystery series, and A Scandal in Scarlet lived up to its predecessors. The plot is exciting and kept me riveted throughout the course of the book. Gemma continues making Sherlockian deductions, showing herself to be both an expert in all things Holmes and a female figure of Holmes herself. I especially love the unique angle of having the detective do the narrating instead of her Watson figure. So we hear the thought processes of Gemma’s deductions and her attempts to understand human nature that is as foreign to her or as to Holmes himself.

I also appreciated seeing a more human side to the Holmes figure than in either the original stories or most pastiches. Gemma works to think through her statements to others based upon what Jayne has taught her is not socially appropriate. This is a level of growth from previous books that Holmes himself never experiences. Her attempts to be more “human” in having a romance with Ryan give her a unique angle. In addition, we also see Jayne showing growth in her own deductive skills, something we never see in the always-astonishable Dr. Watson.

Kim Hicks performs the audio edition of this book, but I felt that she didn’t fit well as choice of narrator for this book. I found her voice for Jayne to come across as squeaky, possibly in compensation for Hicks’s having a naturally low voice. In addition, the voice for Ryan sounded somewhat contrived, perhaps because Hicks speaks with a British accent, but Ryan is American. I’ve noticed that many English narrators struggle to make their American accents fully believable. In addition, the recording has a wider range of volume than typical of audiobooks, making it too loud or too quiet at times. I was disappointed by the quality of the recording of this excellent book.

I thoroughly enjoyed A Scandal in Scarlet, which is a very refreshing book among cozy mysteries. I’m particular about Holmes pastiches, as many seem to try to take advantage of the name of Holmes to sell more books, but this is one Holmes pastiche series that I thoroughly enjoy and always look forward to! I give this book five stars!

Love the story -- ditch the narrator.

I really enjoyed the story, but the narration was disappointing compared to earlier bpoks. The first few books were narrated very well. This narrator makes the other characters in the story sound cartoonish.

I love is author, but I wasn’t as in love with this book as I am with her others. I think her “victims” were too similar and therefore hard to keep track of. I certainly won’t give up on the series because of one “meh” book, though!