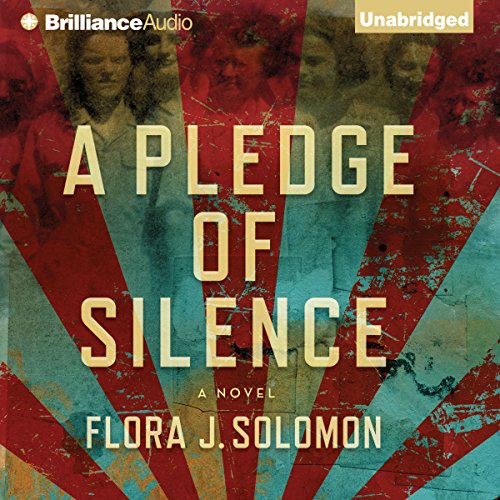 A Pledge of Silence

When Margie Bauer joins the Army Nurse Corps in 1941, she is delighted to be assigned to Manila - the Pearl of the Orient. Though rumors of war circulate, she feels safe - the island is fortified, the airbases are ample, and the Filipino troops are well-trained.

But on December 8, 1941, her dreamworld shatters. Captured by the invading Japanese, Margie ends up interned at Santa Tomas, an infamous prison camp. There, for the next three years, while enduring brutality and starvation, her bravery, resourcefulness, and faith are tested and her life forever changed.

At once an epic tale of a nation at war and the deeply personal story of one woman's journey through hell, A Pledge of Silence vividly illustrates the sacrifices the Greatest Generation made for their country, and the price they continued to pay long after the war was over.

What listeners say about A Pledge of Silence

You won't be disappointed!

This is not the type of book I read. I got tired, quite a while ago, with boring romances, and have turned immediately to mysteries when looking for a book. I was ready for something different this time, so started skimming through all of them. I can't remember what exactly caught my eye, but I'm so glad this book did. Once I started reading it, and listening to it while in the car, I couldn't stop. Very well written and narrated!

I tried to like this book because the story is interesting but the narrator's panicked, breathy interpretation of female characters is too degrading. Whenever a woman is in a challenging situation the narrator blows out the most dramatic and helpless voice she can muster. She has a nice voice for the main narration of the story but her over-acting of the characters is distracting. This is an audio book. When I read a book I do imagine a small change in voice for characters but she's trying to turn it in to a soap opera. Her deep male characters are disturbing. She tries too hard and it turns out offensive. I've listened to audio books recorded by famous actors/actresses that do not over-act this way. I wonder if the writer intended to have a breathy, weak, pathetic female antagonist, I doubt it. From now on, I will avoid all books with this narrator. It prevents the listener from appreciating the story when she pushes air out of her lungs harshly to get that helpless breathy tone. I just want to stop the audio so she can catch her breath.

This was a wonderful book. The insights to PTSD were spot on and the story was informing and interesting. I would highly recommend this book! It's in my top five.

Wonderful story about a WW2 nurse!

I would recommend this book to anyone interested in reading about a nurse in the Philippines during WW2. This book talks about the effects the war has on her and her family and friends. I also enjoyed the narration of this fascinating story.

The story of the nurse before, during, and after the war is the best part. Plus, I like the ending of the historical fiction novel and found it very satisfying throughout!

A pledge of silence

I read so many book s that it's hard to find a really good read, well l got lucky finding this book amazing l couldn't read it fast enough.

Well written : best historical detailed novel I read in along time. Did not want it to end.

Boring. Predictable. Some detailed descriptions that are completely out of character, e.g the detailed medical procedures, a result of some background research that was left in the story without any concern for relevance.
The narrator should rather just read the book and forget about assigning "voices" to the characters.

Terrible narrator. Great story but hard to listen to with her ridiculous made up voices for the characters. The accents she tried to use for different characters were like nails on a chalk board. I’ll have to finish book in written form

Stories of wartime atrocities and their effects on those who experienced them and generations that followed felt like my mom finally teling me what she went through. It was gripping!

Read with tissue and plenty of time. Thank you for sharing your heroic story. It was hard to put down.