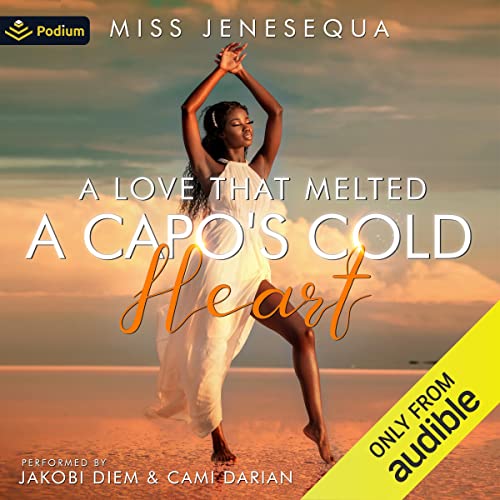 A Love That Melted a Capo's Cold Heart

By: Miss Jenesequa
Narrated by: Jakobi Diem,Cami Darian
Try for £0.00

After fleeing her hometown for 10 months due to her broken heart, Danaë Westbrook is summoned home and forced to get her act together.

No longer fond of her free-spirited nature, Danaë’s father wants the apple of his eye to put her brains to use and makes her his newest employee. The weekend before starting her new job - or imprisonment as she calls it - Danaë takes a spontaneous night out with her best friend, and the night leads to an innocent game of truth or dare. A game that soon lands Danaë in the path of a dangerous new attraction.

Cassian Acardi is a man of few words, but when he speaks, you sure as hell are going to listen. The tragic loss of his daughter made an icebox form where his heart once was, leaving no room for him to care about seeking a genuine romantic connection. His family’s empire is his number one priority in life. As a boss, he’s used to being the one who sets everything in motion. So when Danaë approaches him first, placing him in the passenger seat, Cassian is intrigued. However, he tries to suppress his curiosity about the gorgeous stranger who boldly stepped to him, until their paths cross again. This time, neither of them can run from fate’s hypnotic pull determined to bring them together.

Could Danaë be the one to melt the cold-hearted Cassian, or will Cassian fall victim to his inner demons, convincing himself that he doesn’t deserve love and ultimately pushing Danaë away for good?

This is my first time listening/knowing this author. I liked the storyline it kept my attention the entire time. Having Jakobi Diem narrate the book is *chefs kiss* He is the reason why I even gave this book a chance. My issue is the female narrator. Does she have a speech impediment? She couldn't pronounce any words with: th, sh tt, or ch. As many times the word witch was mentioned and it came out as "wit" irked the mess out of me. Seriously who can't pronounce the word much.?! Anyways the storyline, Jakobi were great. Elmer Fudd need to find a newline of work.
PS. The female narrator pronunciation of words was laughable. The female characters last name is Westbrook, but narrator pronounced it Wetbrook lol WTH?! Another time she couldn't say treat it came out tweet lol. Ok I'm done 😂

I loved it all! The story, narrators and characters! I would love to read about his brother and her friend.

Wowzers! This is now one of my favorite books. I will try her other books. This book was a great length and I just love the love they shared.

Jakobi is a beast, damn

The storyline was good, Jakobi is absolute 🔥 as always, but the female narrating was the absolute worst I’ve ever heard in my life! She clearly has a horrible speech impediment. She sounded like a child sneaking to read an adult book that she had no business touching, let alone reading. She sounds cartoonish almost. I had to listen to her at almost 2X normal speed, because I couldn’t take her voice and butchered pronunciation of words. Her intonation and inflection were… well… every voice sounded the same… flat and in the same voice. I feel awful for feeling this way. This just about threw my feminism out the window, speaking this way of another female. But I’m trying to save y’all’s ears. I’ll NEVER listen to anything else with this female narrator again. Jakobi’s voice melts my insides in the best ways possible, and it hurts my soul to want to return anything he’s read, but this is one book that I literally regret purchasing the audio of… because of the female. 😣 Jakobi is the only reason this performance doesn’t get a 1-star. She. Ruined. It.

I enjoyed the story immensely. Jakobi Diem is soooo freaken fire!!! 🔥🔥🔥 My first time listening to Cami and she did well. This was a sexy book!

I had to purchase thr book and read it instead of listening to it on my road trip. The woman who read for the female characters is NOT good. It's so bad it takes you put of the story. I couldn't get past the second chapter. Wish I didn't use a credit on it. The story however is good and I would read it again, just never listen to it. Totally ruined the story.

Spicy and yet full of a roller-coaster emotions

Very good listen. started out slow 🐌 then you begin to feel the heat. Jakobi, as always brings what's needed to the story to get you hooked. Great writing and Acting.

I LOVE THIS AUDIOBOOK. THE NARRATORS ESPECIALLY JAKOBI DIEM WAS VERY GOOD. I READ THE ACTUAL BOOK AND LOVED IT WHEN THE AUDIOBOOK BECAME AVAILABLE I KNEW I HAD TO GET IT.

I SO LOVED THIS BOOK. AND THE Characters. Now I know part 2 has to be of Kristen and in Adina I love them as well can't wait till they have they family and also the narrative of the man sounds like Tom Loc lol