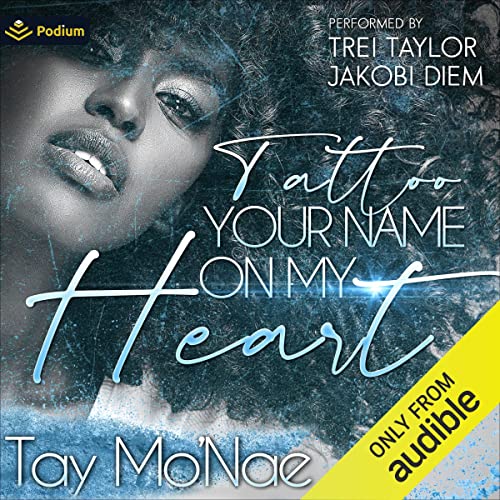 Tattoo Your Name on My Heart

By: Tay Mo'Nae
Narrated by: Trei Taylor,Jakobi Diem
Try for £0.00

Zavion never knew what love was. His mother abandoned him at two, leaving him in the hands of his father, to deal with situations no child should ever have to face. Forced to grow up sooner than he should've, Zavion's heart became cold and his emotions void.

Now, he's an owner of a popular tattoo shop and he's still battling scars from his childhood. Unable to deal with his past trauma or allow himself to open up to anyone, Zavion throws himself headfirst into his work and uses women as objects rather than partners...until he meets Samara.

Samara wears a mask that she has no intentions of lifting until Zavion walks into her life. Moving to Butter Ridge Falls was supposed to be a new beginning. After dealing with the painful memories back home for so long, she decides it's time to get her life together and further her career as a tattoo artist. While working under Zavion, she soon learns the two of them are a lot more alike than she would have suspected. Driven by sex and partying, Samara attempts to hide the hurt she suffered long ago until she's forced to welcome it on her doorstep.

Join Zavion and Samara—two souls struggling with intimacy, trust, and relationships—on an emotional rollercoaster that leads them to face their past traumas and learn that there is no time limit to healing.

What listeners say about Tattoo Your Name on My Heart

Loved this when I read it. Even better in audio format. Jakobi great as always. Trei is growing one me. Kudos to Tay for a great story.

This was a good story- explored important topics

I am a therapist and I love how the impact of trauma was explored and remedied in this new age love story. Very good.
I am also a huge fan of Jakobi and enjoyed Trei as well.

Loved this book and the main characters! I didn’t want the book to end. Narrators we’re perfect as well!!!

I truly loved this book, this one out of many is the first one that was realistic to many peoples lives everyday. I will be replaying this one.

Tay MoNae has done it again

I enjoyed listening to Tay MoNae's "DND" and decided to pre-order Tattoo Your Name on My Heart. I am very happy to say Tay MoNae hasn't disappointed again! The storyline and the narration were exceptional.

This book had characters with serious issues; however, showed ways to constructively cope with it. The narrators did a good job with characters, especially one on my favorites, Jakobi. Looking forward to the next book by this author and narrators.

This book was wonderful!

I read this book when it first came out. The narrators brought the characters to life. Great Read!

This book was so great!! I don’t like writing reviews, but I had to give this book 10 ⭐️⭐️⭐️⭐️⭐️⭐️⭐️ the emotions are so real! The Narrators both brought both characters to life! Jakobi was amazing as always and Teri was amazing! The author really did a wonderful job telling this story! It’s worth a credit easy! I listen to this in one day and couldn’t put it down! This Is my second book by this author and she delivered! This book was 🔥🔥🔥🔥

This book was captivating and a great read. The love scenes were awesome and the book addressed a lot of issues w/o being too heavy. A 10 out of 10 recommend.

This book had me feeling all types of emotions right along with the characters. The author did an amazing job telling their stories and the narrators did an awesome job bringing their stories to life!!