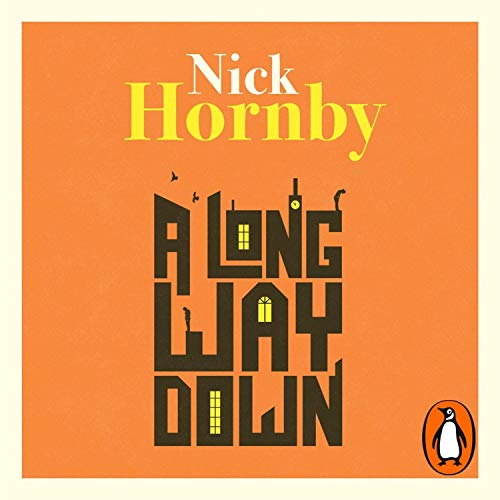 A Long Way Down

'Can I explain why I wanted to jump off the top of a tower block?'

For disgraced TV presenter Martin Sharp the answer's pretty simple: He has, in his own words, 'pissed his life away'. And on New Year's Eve, he's going to end it all.... But not, as it happens, alone. Because first single-mum Maureen, then 18-year-old Jess, and lastly American rock-god JJ turn up and crash Martin's private party. They've stolen his idea - but brought their own reasons. Yet it's hard to jump when you've got an audience queuing impatiently behind you. A few heated words and some slices of cold pizza later and these four strangers are suddenly allies. But is their unlikely friendship a good enough reason to carry on living?

What listeners say about A Long Way Down

I like authors who give their characters depth and credibility. I enjoy finding out what is going on in people's heads, which is why I like autobiographies and memoirs. Nick throws a fascinating cast together and then we get to observe what happens next. A bit like Big Brother with substance and a plot.

Would you listen to A Long Way Down again? Why?

The development of adaptations through actors were never better. The story hinges on the characters' differences on the Surface, and with Hornby's sensitive and loving humour they all come to life through perfect casting. As always, Hornby makes me see the joy of life and the beauty of people.

Jessie is so sad, wanting more out of life, trying all the time and mixes geniality with less fortunate choices, with an insecure and warm heart beating inside.

Characterisation, which was both tender, funny and distinct, making the most of Hornby's words.

I enjoyed the different narrators for each character. It was a very easy listen, not nick hornby's best but good

It started so well! I was hooked and was really enjoying it. Then it got a little drawn out and a little dull.

Pauline McLynn's irish accent would not have been in my head unless I had listened to her. I actually enjoyed the narration from all 4 readers. Shame the story was a little dissapointing.

Was A Long Way Down worth the listening time?

I am glad I listened to it because I had heard about the book, read the blurb and was intrigued. But I wouldn't listen again.

What made the experience of listening to A Long Way Down the most enjoyable?

The four narrators of A Long Way Down gave it a great flow. Each gave their character a realistic personality and depth.

The varied perspectives of each character, and their personal story behind what brought them to the roof of a tower block on NYE, made for an interesting read. The shortness of each chapter made it difficult to stop listening.

Each narrator had a distinct accent/speaking style, making the book more of a performance than if the book had been read.

The ending seemed a little abrupt, I was half expecting the "you have reached the end of this part but not the end of the audiobook" from the audible voice. I'm night sure if this is just because I tend to listen to books over 20 hours, or if I'd gotten so immersed in the story I hadn't expected it to end without a little more detail.

I found the four main characters too irritating to empathise with them. To be honest, I wanted to return the book so many times but felt I couldn't because I had already returned some in the last months. Nick Hornby seems to have lost his way with this one. Sorry - cannot recommend it at all although the narrators did a good job.

Great narration. Fun story in a dark sort of way. Made me laugh out loud several times. Maureen in particular was a hoot!

How to begin a review of a group of people inadvertently meeting up on the roof of a building with an aim in common!!! – to commit suicide – or not, to commit suicide – as none of them are very committed to the task!!! However, the individual stories that come about in the hereafter that led them to the path/stairs at the top of the building are somewhat amusing. I didn’t find the stories particularly funny, in fact the biggest titter from me came when they all sat around eating someone elses pizza!!! It is, I suppose a fairly amusing story and I would be happy to give it a decent scoring, but basically it is a take it or leave it book. Mildly entertaining – perhaps the film is better!!!

the film should be good

Where does A Long Way Down rank among all the audiobooks you’ve listened to so far?

its worth listening to. the characters are all portrayed in different chapters. its a very well written book and the narrators are great. feel good, funny, sad, and generally makes you feel like your life isn't so bad after all.
i'll go and see the film now for comparison!

I sincerely loved this one. its well written with well developed characters. This was pure entertainment. it is one of those ones.

Made me think about

How I see myself in JJ. to try to live with more understanding and love for myself, as cliche as it sounds I am stuck with myself and I have no one but me.

What would have made A Long Way Down better?

I didn't like the ending... I hoped for more.

Which character – as performed by the narrators – was your favorite?

Martin, he was a great performance.

The characters were great, the plot line wasn't.