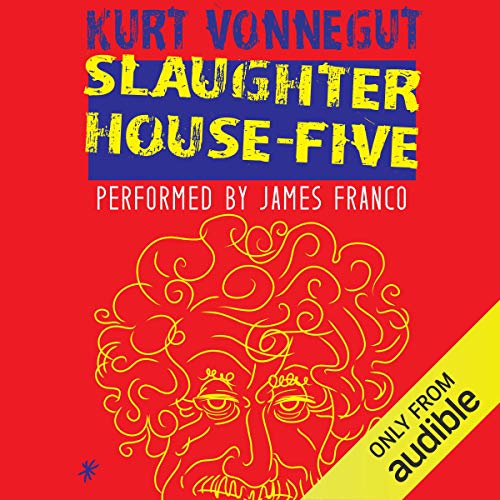 By: Kurt Vonnegut
Narrated by: James Franco
Try for £0.00

Slaughterhouse-Five is the now famous parable of Billy Pilgrim, a World War II veteran and POW who has, in the later stage of his life, become "unstuck in time" and who experiences at will (or unwillingly) all known events of his chronology out of order and sometimes simultaneously.

Traumatized by the bombing of Dresden at the time he had been imprisoned, Pilgrim drifts through all events and history, sometimes deeply implicated, sometimes a witness. He is surrounded by Vonnegut's usual large cast of continuing characters (notably here the hack science fiction writer Kilgore Trout and the alien Tralfamadorians, who oversee his life and remind him constantly that there is no causation, no order, no motive to existence). The "unstuck" nature of Pilgrim's experience may constitute an early novelistic use of what we now call post-traumatic stress disorder; then again, Pilgrim's aliens may be as "real" as Dresden is real to him.

Struggling to find some purpose, order, or meaning to his existence and humanity's, Pilgrim meets the beauteous and mysterious Montana Wildhack (certainly the author's best character name), has a child with her, and drifts on some supernal plane, finally, in which Kilgore Trout, the Tralfamadorians, Montana Wildhack, and the ruins of Dresden do not merge but rather disperse through all planes of existence.

Slaughterhouse-Five was hugely successful, brought Vonnegut an enormous audience, was a finalist for the National Book Award and a best seller, and remains four decades later as timeless and shattering a war fiction as Catch-22, with which it stands as the two signal novels of their riotous and furious decade.

"James Franco is an inspired choice as narrator for this anti-war classic. While still young, he still manages to sound world-weary.... Franco has fun with the offbeat characters and Vonnegut's quirky text but keeps the overall tone thoughtful.... Franco's reading gives the 1960s classic a freshness that will appeal to both new listeners and Vonnegut's many fans." ( AudioFile)

What listeners say about Slaughterhouse-Five

Did I Enjoy it or Experience it?

"Unputdownable", "unmissable", "unreadable" we've seen them all in amongst the many reviews that populate sites like Audible and Amazon. Well how about "unreviewable"? That's pretty much how I'm finding Kurt Vonnegut's "Slaughterhouse Five".

Audible have it in the Fiction-Humour section. There is some really black humour in there but particularly in this form with James Franco's laconic drawl it really isn't going to have you searching for the LOL icon. It's often described as sc-fi but although yes there is a race of aliens so it can reasonably have that tag attached to it I wouldn't call it that either. It's also a book about war and here is where, if anywhere, I would settle. After all it was inspired by the author's real experience of World war II and in particular the Dresden bombing. Even if I settle on that though it isn't going to satisfy anyone who wants a detailed account of the awful events that took place there.

My take on it, which is just one of many possible conclusions, is that this is a story of a confused mind left traumatised by life and particularly the sheer inhumanity of the war. It jumps around time but there are clear signposted images of how Bill Pilgrim's personal narrative came about. I don't think the aliens in Vonnegut's story are supposed to be real, they are figments of Pilgrim's tortured imagination designed to reconcile him to what has happened to him. A Three Musketeers candy wrapper, some sci-fi books he adores and the similarities to those stories and so on are cleverly placed.

The result of his time displacement though is that the story is deliberately disjointed and at times the links aren't obvious or indeed even there. As a representation of a troubled mind I think it's excellent and would recommend the book on that basis. Whether that is actually enjoyable though will very much be a matter of taste. I'd say give it a go because it is very, very clever but be prepared that it might not meet your personal taste. I'm still not convinced as to whether I enjoyed it or simply experienced it. The fact that I'm struggling with it in so many ways is as good a reason to recommend it as any though if you want a reading challenge.

This is an all-time great novel, and I've enjoyed more than a few of Franco's acting performances in the past, so I was looking forward to this. Unfortunately, the way Franco has chosen to read the book is frankly soporific.

trapped in the amber of this moment.


A book about war and the inhumanity of being human, a timeless time perspective of all the things that keep on repeating the same mistakes with horrible regularity and yet we choose to accept as new phenomena of our very particular time, were we commit very old crimes “So It Goes”.

A sad beautiful tale that is not afraid to expose the ugliest of truth, a desperate attempt at creating a change in a world that is stuck in the amber of its own creation constant war to prove we were right once, or we can sell over there in freedom because we won the war and “So It Goes”.

A classic that is rebellious and confrontative, with anarchic, nihilistic thoughts, to liberate us from complacency and acceptance of the of the status quo, “So It Goes”.

A fantastic novel read in a touchingly wry way by James Franco. I highly recommend giving it a listen.

I totally loved it. book is great and Franco is class as per usual. Hopefully he does more.

6 hours of bizarre stories. Well worth a listen made especially pleasing by James Franco.

This book does not serve to force opinions upon you. It captures the melancholy of war and gives real depth to all of the characters. Do not be put off by the time travel to another planet, this gradually becomes clear why the character does this.
I will return to this book in the future and I loved the narration.

A no-nonsense anti-war novel from based on the personal experience of the author. The main protagonist elicits your sympathy as he is clearly out of time, place and depth in a war that he is ill-built and equipped for. The descent into madness seems all the more reasonable as one considers the horrors that he has faced. To empathise the almost casual approach to death, there is a phrase that the author uses every time someone (or something) dies. At first you find it odd, then slightly annoying, then it begins to grate, until finally you realise just how many people have died during this novel and how casually their deaths are accepted. And, for me, that was the most chilling aspect of all.

The reading of this audiobook by Franco is laconic, almost lazy in style, yet it suits the material perfectly.

A great book that will appeal to the fans of Catch-22.

Vonnegut is one of a kind, and if you like that kind, Slaughterhouse Five is not to be missed. However, the same cannot be said about this audiobook. I usually like James Franco as an actor, but I was greatly disappointed with his narration of this book. There was nothing at all remarkable about his voice. He mumbled some of the time, and he sounded bored and listless all of the time. He seemed to be phoning it in.

Everything is nothing, with a twist.

I've read Slaughterhouse-Five several times and I'm still not sure I know exactly how Vonnegut pulls it off. It is primarily a postmodern, anti-war novel. It is an absurd look at war, memory, time, and humanity, but it is also gentle. Its prose emotionally feels (go ahead, pet the emotion) like the tug of the tides, the heaviness of sleep, the seduction of alcohol, the dizziness of love. His prose is simple, but beautiful.

Obviously, part of the brilliance of this novel is born from the reality that Vonnegut is largely playing the notes of his own song (obviously, obscured by an unreliable narrator, time that is unstuck, and generous kidnapping aliens). It is the song of someone who has seen horrible, horrible things but still wants to dance and smile (so a Totentanz?).

Emperor, your sword won't help you out
Sceptre and crown are worthless here
I've taken you by the hand
For you must come to my dance

One of my all-time favorites novels ruined by a narrator who just sounds bored. Real shame.

Normally, no matter good or bad a book may be, I HAVE to finish it. I have to know how it ends. This book is the exception. It's not so much to do with the Author, but the Narrator. James Franco's narration of the book makes this story virtually unbearable. Honestly, I couldn't even get past the first hour. I'll have to see if there's another narrator for the book.

Although I liked the book, I wasn't a fan of James Franco's reading of it. His mumbling and flat affect made the book made the book feel a bit tedious.

I knew little about this book other than it was apparently a must read. The story itself is unique if not confusing until you get the hang of it. Not as satisfying a tale as I would have liked but the flow and form of the story was enjoyable.

James Franco though... you'd think you'd get a decent voice performance out of a film actor. It was like having a high school junior drama student read it to me: apathetic tone, crappy fake accents, limited emotional range. There was barely an audible difference between characters and he sounded SO BORED the whole time. All in all, a real turd of a reading.

I'd recommend the book, just do yourself a favor and find a different narrator.

I loved this book until James Franco butchered it. I suggest having a listen to the preview first. Wish I did.

James Franco did a terrible job. Practically monotone. Audible could've gotten anybody to better than this.

Classic 1960's writing. Terrible 2010 voice. Male vocal fry. Also, levels should have been normalized. Too much gain adjustment required. Kept having to back up position and increase volume to hear what I'd missed. Then, few minutes later, pull out the earbuds to keep from being blasted out.

What did you love best about Slaughterhouse-Five?

If like me, you read this in school, all the memories will flood back about the unusual characters and situations. If this is new for you, I believe you will appreciate James Franco's soothing read. I'd been waiting a while for Mr Franco to record an audiobook. Audible had sent out a teaser by email a month early about this book, I was patient! As a fan, I particularly enjoyed his caedence and the nuances of his reading. To me it's like 'a work of art'! So it goes.