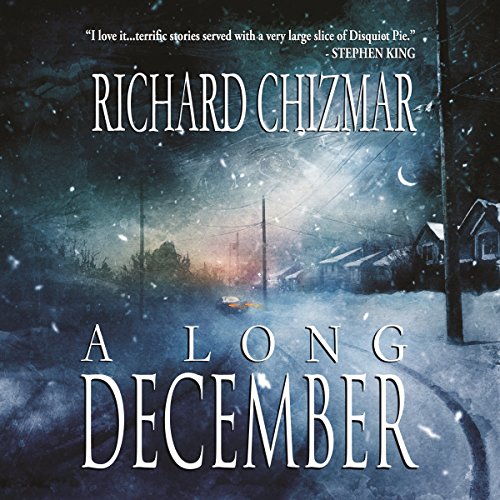 By: Richard Chizmar
Narrated by: David Stifel
Try for £0.00

In 1996, Richard Chizmar's debut short story collection, Midnight Promises, was a finalist for the World Fantasy Award. Publishers Weekly called it "a sterling collection" while singling out "The Silence of Sorrow" as "an understated masterpiece".

Two years later, Subterranean Press published a mini-collection from Chizmar entitled Monsters and Other Stories. In his introduction, acclaimed genre critic Edward Bryant said, "When all is said and done, this book should leave you in utter silence, giving you time and opportunity to contemplate what you just read. Tough storytelling from a tough writer; but a writer who is not calloused. Chizmar possesses a finely honed gift of empathy. With utter grace and loving kindness, he'll put you right inside the life (and soul) of the monster."

Eerie, suspenseful, poignant, the stories in A Long December range from horror to suspense, crime to dark fantasy, mainstream to mystery.

What listeners say about A Long December

I may have found myself a new author.

Great bunch short stories, finished off with a bang.
Looking forward to a whole book.

He's one of those writers who send you searching for rheir whole book of business because he's always great, but sometimes he really gets to you.

This collection is a nice, long, slow listen. You'll get a little creeped out, and you'll laugh, and you'll meet characters who remind you of people you know.

When I started listening to Donald Stifel's narration, I thought his voice would be too distinctive, and that it would be hard to distinguish characters. That notion evaporated very quickly as I soon found myself listening to a conversation between two cops and a woman without a moment's doubt as to who was whom. Characters? Mr. Stifel's got a million of 'em, and I enjoyed his narration a lot.

I really enjoyed these stories cover to cover. awesomely narrated. I didn't think I would like the voice At first, but he knocked it out of the park

loved it. Hated for it to end. What next Mr. Chizmar? I'm ready and waiting!

If you love creepy short stories with a twist you'll really enjoy this book. The narrator was excellent and paced the stories very well.

I love reading short stories and these were very good, a wide range of genres. Enjoyed every story.

Not the Chizmar I Love

Stories are predictable, too short to even offer a twist. Tried to enjoy them, but they didn't work for me. Some started promising, but ended abruptly without any satisfaction.

The stories are not bad

The narrator tears me right out of the stories. His voice should not be reading anything out loud. Voice… timing… pronunciation.
Just, no thank you

The stories are not very good and the narrator is no better. Once you get to a part where you think the story will get good, it’s over. The last story was the best one. It had a beginning a middle and an actual end that made sense.

I had such high hopes choosing this book. I did so because Stephen King recommended it. I was sorely disappointed. Most of the stories just ended awkwardly. Many times I had to rewind, thinking that I missed the end of the story. I had not. Left you feeling cheated and unfulfilled. Also, some of the stories seemed reminiscent of stories I have heard in the past.
The narrator also left a bit to be desired. Not a smooth talking voice that audiobooks need to be successful. It’s a shame. I was going to download the next one, but will look further for my next read.