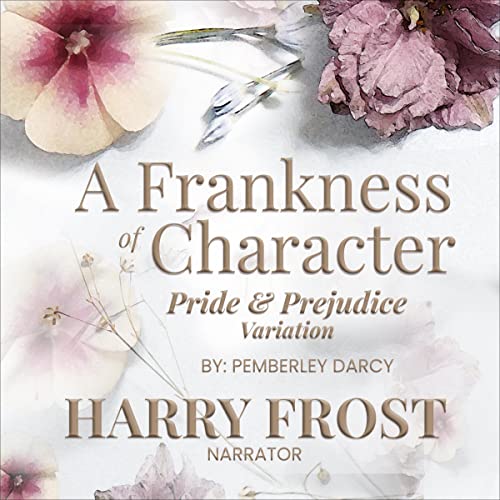 A Frankness of Character

By: Pemberley Darcy,A Lady
Narrated by: Harry Frost
Try for £0.00

An apology more offensive than an infamous insult. A decidedly epic set down. A gentleman left properly humbled. An impertinent young lady provoked to civil disdain.

As humiliating as an ill-bred set down was from an impertinent country miss, the veracity of Elizabeth Bennet’s arguments and the humiliation at his own lack of understanding started to sink in.

After years of entrenched isolation, others would take notice if he appeared more civil. How was he to take his place in society without raising expectations?

He reaches out to the one person he can trust, Colonel Fitzwilliam, who joins the party at Netherfield.

The colonel’s plan for Mr. Darcy’s redemption seems on course until his aunt’s obsequious parson proposes marriage to Miss Bingley, setting off a flurry of unintended consequences that even he struggles to contain.

Longbourn is in an uproar. Lady Catherine de Bourgh is on a rampage. Darcy and Elizabeth are estranged.

Dear Listener, this Pride and Prejudice Variation is of the sweet, clean, and slightly witty sort. Although the book opens with an argument and a lot of accusations are thrown around, this story promises nothing more vulgar than Mrs. Bennet’s exclamations and a few ill-informed insinuations. Adult topics are discussed. There will be a happy ending for all.

What listeners say about A Frankness of Character

A refreshing, funny and sweet variation

This is an amazing story! A fantastic Colonel, a persistent if a bit clueless Darcy, an oblivious Bingley and a quick to temper Lizzy. This was a great funny and sweet variation with the funniest proposal day I ever read! I loved this Colonel trying so hard to give Darcy some good advice and calling out his behaviour towards Lizzy. I struggled a bit with the changing behaviour of Lizzy she was easily swayed in this one but when she fell she fell hard! I loved the indiscreet kisses 😆 between ODC and I loved Lydia’s new and happier ending. Harry’s narration was amazing as always! His pacing, use of different characters voices and his overall story telling is second to none!

I enjoyed the story overall although the multiple proposal farce fell a bit flat. Narration was very good.

I only chose this as one of those, "if you like X, you might like Y" recommendations, but I have thoroughly enjoyed it. I especially liked the alternative ending for Lydia and the efforts of Lady Catherine to foist her plans on the Bennets. There is plenty of humour and an excellent version of Colonel Fitzwilliam. Hope this author writes more.

This book is very good. I especially liked the happier ending for Lydia. I also very much liked that colonel Fitzwilliam came into the story more to give great advice, I have always seen him as a fantastic side character.
Harry Frost does a great job narrating.

I’d never read anything by this author before but I have listened to several by voice actor Harry Frost so I knew that I was sure to at least enjoy the narration. Fantastic story — believable twist to a favorite classic and excellent storytelling by a gifted narrator. A FRANKNESS OF CHARACTER stays true to Austen’s characters; satisfying story arc for such beloved characters in this thoughtful reimagining. Harry Frost did not disappoint—excellent pacing, rich range of characters without making any of them cliche, and his “Darcy” is the best I’ve heard in any Austen-adjacent audiobook. I look forward to listening to this one again. Brava!

What can one say about Harry Frost that hasn’t already been said. A favourite narrator and performer, he makes every book a pleasurable listen. He is an automatic go to for me.

I recall reading this a while back. As soon as I saw Harry Frost was narrating, I purchased the Audible immediately. A delightful story with the talented "Harry style" made it all the more fun to listen to. You can always distinguish between the characters dialogue. His Darcy is by far the best. Colonel Fitzwilliam is a more involved character here. Just love the Colonel. A definite HEA with some humor and smiles in the mix.

I loved the plot and the development of the characters. I always enjoy more involvement from Colonel Fitzwilliam and the solution to Lydia’s story.
I’m looking forward to another book from the author.
Highly recommended

The story is a good one but the narrator does a great job with the different characters and voices.

Felt like a live performance! I have never enjoyed a narrator as much as Harry Frost! The great storyline certainly highlighted his wonderful talent. Loved every minute!

Loved this story. I will be listening again. Harry Frost is such an excellent narrator.

If I were to criticize anything I would say it would have benefited from a bit of tightening up. Some events that were repeated didn’t need to be, that kind of thing. Otherwise I recommend unreservedly. This is my first book by Pemberley Darcy, it won’t be my last.