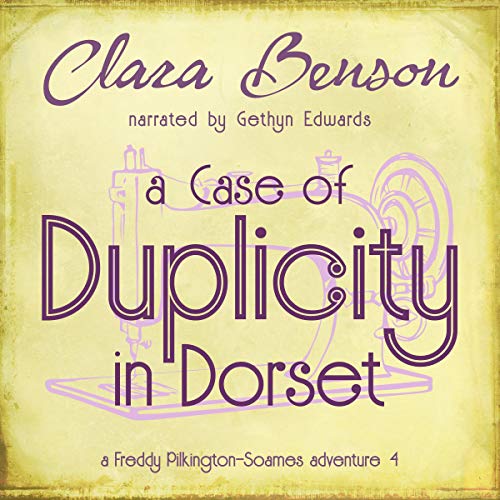 A Case of Duplicity in Dorset

By: Clara Benson
Narrated by: Gethyn Edwards
Try for £0.00

When the Duke of Purbeck throws a house party to celebrate his daughter's 21st birthday and present her with a family heirloom, nobody expects that the weekend will end in murder. The fabled Belsingham pearls have a history steeped in blood and slaughter dating back more than a century - and now it seems they've claimed another life, when the interfering and opinionated Professor Coddington is found dead in the library with the pearls clutched in his hand.

It looks like a robbery gone wrong, but then why didn't the thief take the necklace? And how did he escape unnoticed, given that half the guests were seemingly wandering around the house at the time of the murder?

House guest Freddy Pilkington-Soames has enough on his plate already, with a lecherous nuisance of a grandfather to keep an eye on, a girlfriend his mother disapproves of, and an ex-girlfriend who's engaged to another man but shows signs of changing her mind. But with a killer on the loose in the house, it's time to forget his own troubles and rise to the occasion - or risk a scandal that could destroy the reputation of his whole family.

What listeners say about A Case of Duplicity in Dorset

Clara Benson is one of my favourite writers, she always writes well and her characters are real individuals. Freddy is my favourite of her characters and in this, his fourth adventure, he yet again pulls the rabbit out of the hat whilst I'm still completely puzzled. To date I have only ever read Clara's books but this time I was given A Case of Duplicity in Dorset as an audio book. Gethyn Edwards does a fantastic job of bringing Freddy and co to life and I have now put the other books on my wishlist. VERY highly recommended, a must have for fans of cosy mysteries.

Entertaining story. not so keen on narrator

I enjoyed this nice bit of detective fluff. I'm not so keen on the narrator but can live with him.

I throughly enjoyed this caper with the irrepressible Freddy. Fun characters and plot with excellent narration. A credit well spent.

Poor Freddy can't seem to say no to females. Here he is at a house party for the 21st birthday of a female cousin. Also present, getting Freddy into trouble are a current girl friend, an ex-girl friend, the female cousin, his mother and more! Of course, we also have mysterious jokes in the night, secret passages, missing pearls, murder and much more. And can Freddy stay out of trouble long enough to solve the mysteries?

Another fun vintage feeling mystery by Clara Benson, and Gethyn Edwards does a find job of reading the tale.

Annoying reading of a rather silly story with ghastly dialogue

I am usually prepared to forgive a poor reader if it is a good story. But this is a double whammy: a reader whose affected drawl is really irritating, and charactures of characters, who make it impossible to suspend disbelief and just enjoy a simple story. I want my money back. I will not be listening any more if these stories.

I loved the books so much I had to find the audible books! They are so much fun. The narrator does a fabulous job of bringing the characters to life. We need more Freddie books and audible books!

I was thrilled when I realized that AUDIBLE had a new Pilkington-Soames available. DUPLICITY in DORSET is a classic country house mystery. The story takes the reader on a wild ride. Clara Benson's Freddy is both bumbling and brilliant. In each of his adventures, one can see Freddy grow to trust his analytical ability and his native shrewdness. Freddy can play the vacuous "man about town" when it suits him (Bertie Wooster, watch out!) but the reader comes to realize that the Clarion's canny reporter has unplumbed depths.
Gethyn Edwards' outstanding narration brings Freddy and the other characters vividly to life. Each voice is distinct, memorable and easy to recognize. Edwards is a perfect choice for Clara Benson's droll comedy.
I cannot WAIT for the next Pilkington-Soames treasure!