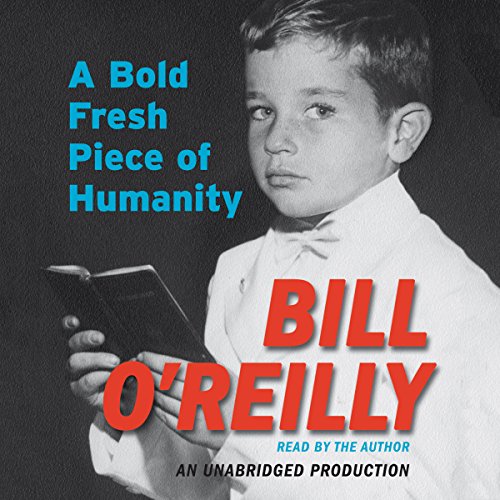 A Bold Fresh Piece of Humanity

One day in 1957, in the third-grade classroom of St. Brigid's parochial school, an exasperated Sister Mary Lurana bent over a restless young William O'Reilly and said, "William, you are a bold, fresh piece of humanity."

Little did she know that she was, early in his career as a troublemaker, defining the essence of Bill O'Reilly and providing him with the title of his brash and entertaining issues-based memoir.

And this time it's personal. In his most intimate book yet, O'Reilly goes back in time to examine the people, places, and experiences that launched him on his journey from working-class kid to immensely influential television personality and best-selling author.

Listeners will learn how his traditional outlook was formed in the crucible of his family, his neighborhood, his church, and his schools, and how his views on America's proper role in the world emerged from covering four wars on five continents over three-plus decades as a news correspondent.

What will delight his numerous fans and surprise many others is the humor and self-deprecation with which he handles one of his core subjects: himself, and just how O'Reilly became O'Reilly.

What listeners say about A Bold Fresh Piece of Humanity

This book is great, Bill is right you do learn many things about history and human behavior.The best part is that you enjoy listening to him and laugh at his funny anecdotes.

Avid Reader Explains Bold Fresh is a must Listen

The sign of a good autobiography is its humility and honesty, and incredibly, A Bold Fresh is both. The experience of listening to this audiobook reminded me of Sidney Poitier's "The Measure of a Man", which was excellent. Why that is the case is obvious to me now. Simply, audio books that are read by their author communicate the authentic story as it went through the authors mind. The emotions and intonations add so much to the experience, communicating much more than words alone.

Authors take note, if you wish to get to iPod and iPhone customers, it helps a great deal to show that it is worth the time out of your life to read your own material.

O'Reilly even sounds a little bit like George Carlin in this one. This is especially true in the chapter on things he doesn't understand. Having grown up in a similar time, place and circumstance to the bloviator, I was able to identify and chuckle at some of his exploits. My guess is that he has embellished some of his experiences but don't we all when telling stories about our upbringing. Getting to know O'Reilly a little better made him a little more likable for me. The book was better than expected.

One of the best I've heard

This audio book was one of the best I've heard. I'm a little younger than Mr. O'Reilly, but not by much, and his chronicles of the 50's through 80's had me laughing to the point of embarrassment on the highway. It was one of the easiest I've ever listened to and was over way before I was ready for it to be. I'm also glad the Bold Fresh Guy shared a bit of his personal self in this book, his Likability Factor (get it) tripled in mine. Way to go Bill!

I loved this book. I listened to it while commuting and during my walking breaks-always hated to have to wait until the next time. Mr O'Reilly narrates his book himself which makes it even better. I also grew up Catholic so could relate to Mr. O's early years.He has some really funny stories as well about his growing up years.Also there is a lot of good advise for the young and aspiring individual in whatever endeavor they are pursuing.
A truly delightful book-you won't regret purchasing this and it wasn't so long that it took an extended time to get through it. Loved it!!

I beleive in his honesty

I am what Bill O'Reilly would call a liberal. Thre is many things I don't agree with him, specially his recent treatment of the slain dr. Tiller. But I gave him a try knowing the intent behind this book was to explain how he forge his believe systems from experiences from his youth. I believe he was the most honest he could be, and even if I will continue to disagree with him on a lots of ways he approach things, I must say this book reinforce the respect I have for him. He stands for what he believes. I would never expect that between the lines you can understand he was such a womanizer. He his an experience narrator and his way of reading his really greats. In fact he doesn't read, he tells the story. That is much nicer. If you have a monthly credit to spent, I would not hesitate to recommend it. maybe you will not like his attitude all the way all the time, but you will surly have a new respect for the honesty of the man.

I have a much better understanding of O'Reily now and the decades of his book.

Bill presents his straight forward and common sense method of decision making and interactions with others. We need this kind of logic in the chaos of today's environment.

Great book. Narrated by Bill O'Reilly made it an even better experience.

I truly enjoyed listening to this book. I plan on playing it for my three boys a chunk at a time because I think there are some great life lessons in this book.