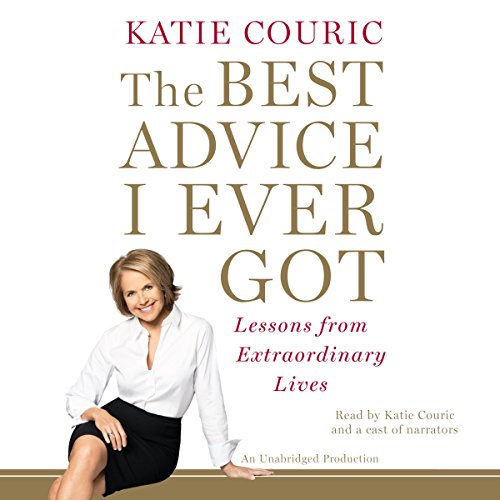 The Best Advice I Ever Got

For anyone who wants to see how today’s best and brightest got it right, got it wrong, and came out on top.

What was the tipping point for Malcolm Gladwell? What unscripted event made Meryl Streep who she is? In this inspiration-packed book, Katie Couric reports from the front lines of the worlds of politics, entertainment, sports, philanthropy, the arts, and business - distilling the ingenious, hard-won insights of leaders and visionaries, who tell us all how to take chances, follow our passions, cope with criticism, and, perhaps most important, commit to something greater than ourselves.

Among the many voices to be heard here are financial guru Suze Orman on the benefits of doing what’s right, not what’s easy; director Steven Spielberg on listening rather than being listened to; quarterback Drew Brees on how his (literal) big break changed his life; and novelist Curtis Sittenfeld on the secrets of a great long-term relationship (she suggests marrying someone less neurotic than you); not to mention:

Along the way, Couric reflects on the good advice - and the missteps - that have guided her from her early days as a desk assistant at ABC to her groundbreaking role as the first female anchor of the CBS Evening News. She reveals how the words of Thomas Jefferson helped her deal with her husband’s tragic death from cancer, and what encouraged her to leave the security of NBC’s Today show for a new adventure at CBS.

Delightful, empowering, and moving, The Best Advice I Ever Got is the perfect book for anyone who is thinking about the future, contemplating taking a risk, or daring to make a leap into the great unknown.

What listeners say about The Best Advice I Ever Got

Enjoyed very much the book. Biased for I have always admired Katie Couric but now can relate to marking episodes in her life. Only her to be able to get such good input from most admirable people.

A great listen....it was a joy to listen to such real life wisdom...again showing us that it is not about how perfect our lives are but just about how we rise to the occasion despite the muddle we get stuck up in.

I recommend this book for anyone looking for retrospection and feeling a bit lost....Katie Couric's book just might point you to all those amazing people in your life who've given you advice despite you noticing it!

What did you love best about The Best Advice I Ever Got?

It really was full of good advice. Some very common advice, some more spectacular or unexpected.

What was one of the most memorable moments of The Best Advice I Ever Got?

The story from Bill Cosby.

If you could sum up The Best Advice I Ever Got in three words, what would they be?

I really got a lot out of this book. I would have bought it as written text, but I really enjoyed
listening to it, piece by piece.

Each piece of advice was unique, yet all advice was divided into sections so that it made sense within the context of the book. There were also introductions for the sections by Katie Couric, which were all enchanting. I will surely listen to it more than once and definitely get my money's worth!

some inspiring, many banal

Katie should have chosen the best and left out the rest. In addition, having the authors narrate their own advice would have brought it to life. Sadly, the narrators overperformed.

Enjoyed 90% of the narration. Throughly enjoyed the parts from Katie Couric herself! Loved the message. Good for graduates or anyone at a turning point in their lives.

While there were many good nuggets in the books, this needs to have a revised addition. It is offensive to have sex offenders telling words of wisdom. If the proceeds were not going to a scholarship funds I would have returned the book. I am surprised that Katie Couric keeps this in circulation.

Repetitive and or conflicting advice offered among the different people featured.

Because Katie has selected writings by many people to share here, advice is sometimes repetitive, and sometimes conflicting. Also, none of the writings are read by the authors, even though some of them are commencement speech is an an audio of the speech is likely available. One of the least enjoyable books I’ve bought from audible and this genre.

Overall it was a great read. Admittedly there are some pieces of advice that drag on and can get downright painful to finish but the good far outweighs the bad.

I.enjoyed this best advise very well written I loved hearing how so many great people were able to speak of their mentors and friends who encouraged them in so many stories. I plan to listen to this audible again
And again. Over all 5 stars