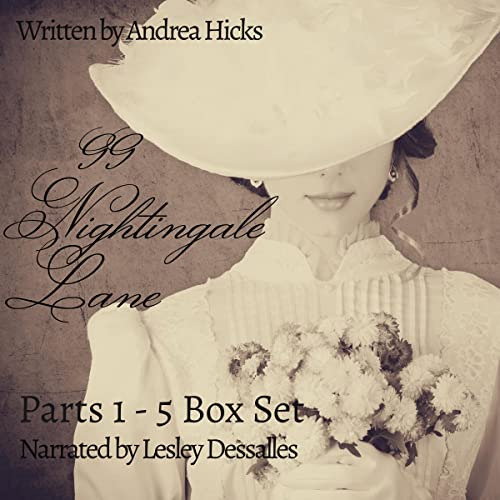 By: Andrea Hicks
Narrated by: Lesley Dessalles
Try for £0.00

Nineteen-year-old Carrie Dobbs has a secret; when her parents discover what she has desperately tried to hide, Carrie's mother, Florrie takes matters into her own hands and arranges a marriage with Arnold Bateman to get Carrie out of Whitechapel and away from the gossips. He is a man Carrie could never love, the opposite of Johan, the young man she adores. Arnold has been posted to India and expects her to go with him and be the wife he needs to further his promotion and position in the army. India is a country she only knows from an atlas, and she is terrified she will never see her family and her beloved best friend, Pearl again. Feeling she has no choice, she travels to India with a heavy heart, wondering if she will ever return to the place she calls home? India is a mystery to her, but this strange and vibrant country gets under her skin, and when someone she admires from afar is kind to her, Carrie wonders if she will find love again.

Carrie's work with convalescing soldiers continues. The Belgian refugees have returned to their homeland, leaving behind a request for her to visit when the war is over - one she readily accepts. The day of Arnold's funeral has passed, much to Carrie's relief, but her mind still conjures with the knowledge she holds about the gold-and-diamond Star of David pin found near Arnold's body. Someone killed him, and until she knows who, she will not rest, even though she had no love for Arnold because of his treatment of her and her son, John. She knows the Star of David is a symbol of the Jewish faith, and remembers her first love and John's father, Johan wearing a pin on his lapel, yet cannot bring it to mind enough to challenge him. And then, there is her sister, Elsie's disappearance. Her little daughter, Rose pines for her. Carrie has run out of answers and is left only with many questions as to why, if Elsie is safe and sound, she would not have let them know and ensured Rose's safety. The drama of the war still plays out in Europe and beyond, yet unknown to all of them another enemy is about to make itself known in the most devastating way and will challenge Carrie and her family more than they ever thought possible.

Listen to Carrie's heart-rending story in this box set of 99 Nightingale Lane and fall in love! Join Carrie as she continues her spellbinding journey into love and independence, and discover what happens when she makes a decision that will change all their lives!