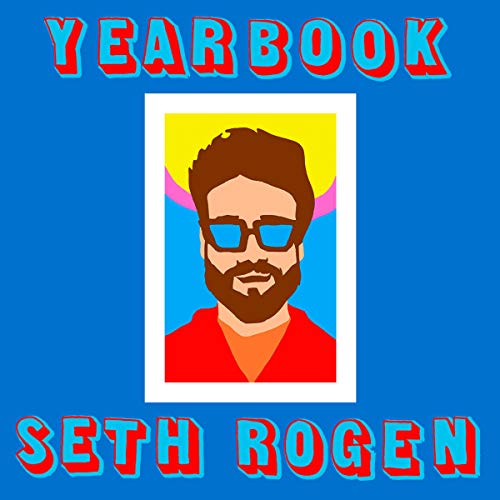 Hi! I'm Seth! I was asked to describe my book, Yearbook, for the inside cover flap (which is a gross phrase) and for websites like this one, so...here it goes!

Yearbook is a collection of true stories that I desperately hope are just funny at worst, and life-changingly amazing at best. (I understand that it's likely the former, which is a fancy 'book' way of saying 'the first one'.)

I asked lots of people to help me read the book including my mom and wife, and together we talk about grandparents, doing stand-up comedy as a teenager, bar mitzvahs and Jewish summer camp, and tell way more stories about doing drugs than my mother would like. I also talk about some of my adventures in Los Angeles and surely say things about other famous people that will create a wildly awkward conversation for me at a party one day.

I hope you enjoy the book should you buy it, and if you don't enjoy it, I'm sorry. If you ever see me on the street and explain the situation, I'll do my best to make it up to you.

What listeners say about Yearbook

This book made me laugh out loud so often my wife gave me dirty looks.

If you ended up at a wedding and you were lucky enough to be sat next to Seth Rogan what would you want him to be like? Would you want details of how amazing he is for becoming famous? Every detail of the film industry? How he goes about writing a script? No. You’d want stories about weed, getting lost, socks, dictators and Jewishness.
Or at least I would.
The performance is great. Using dramatised clips was a master stroke. Makes it more Seth Rogan and even funnier.
There are two slight issues; 1. Seth doesn’t laugh. I like that laugh. Someone should have at least tickled him.
And 2. It doesn’t come with a warning that driving and listening is a bad idea. The Nicolas Cage story made me laugh so hard that I almost crashed my car.
Not the longest book in the world but worth every minute.
I hope he does more.

I thouroughly enjoyed listening to this book on my drive to London and in my hotel. It gave a very true insight into some controversial subjects and situations. I applaud Seth for his honesty and causing me to laugh frequently! Being an actor/ writer myself, having to compromise what I write to please others and ruin the integrity of my story is a subject I enjoyed listening to in this book! I would recommend this audiobook to everyone from all walks of life. P.s. I loved the stories told from other narrators and the sound effects!

Had to listen while high to fully enjoy. Seth becomes better at presenting the story while he continues to read, but I feel like he should have re-done the paragraphs.

Huge fan of Seth, great stories and wit, wish there were more like this to relax with.

I love Seth's voice so the audio version of his book was a must and I wasn't disappointed.

It's a funny listen with the bonus of many other voices of people he mentions adding to the hilarity of the various situations Seth has found himself in.

There is a lot of drug use described but if you know anything about the author, this really shouldn't surprise you. Same goes for the language used, which is wonderfully colourful.

Would definitely recommend this book and I, for one, listen to it again and again.

A great insight to a very funny guy! Loved all the back stories of a celeb world

Goes without saying but if you like Seth you’ll like this audiobook, it is short but it’s full of stories you wouldn’t get with normal autobiographies

I laughed out loud several times listening to the stories in this book! Absolutely brilliant! Highly recommend !

I’m a bugger for sleeping through audible books but listened actively to every scrap of this title. He has chosen genuinely funny engaging and interesting anecdotes with no filler to speak of. I could listen to him reading the phone book so is a great narrator. I think he’d be great narrator for other titles appropriate to his vibe.

This guy could be your best friend. Everyone needs a Seth Rogen in their lives. Of course him telling the stories just makes the whole thing so much funnier!

What a great autobiography/collection of essays by Seth Rogen!
Funny, with a great cast of actor friends helming this 5-ish hour ride along with Rogen himself.

If only all autobiography...

...got as close to doing its job properly as this one. Imagine!? You get some insight to someone, how they are who they are, where they’ve been in their lives, their points of view, their honesty, strength, frailty, confoundedness in the face of ignorance and some horrific realities (vile and blatant antisemitism) All set in these current times where dignity has often been traded for mammon. I liked Seth. Now I really like him and look forward to what I hope will be for him a long fruitful time in and out of the public eye. And his next piece of writing. He can write. He should do a bunch of essays on themes close to his heart or themes that hurt his heart. If he can make time. Of course.

I’ve never been a Seth Rogen fan, so didn’t really know what to expect. Loved it. Very funny and heartfelt short stories. Listened to the book in a day!

Exactly what you imagine

This is a great book if you like Seth Rogen!

If you don’t, this is a completely useless purchase for you.