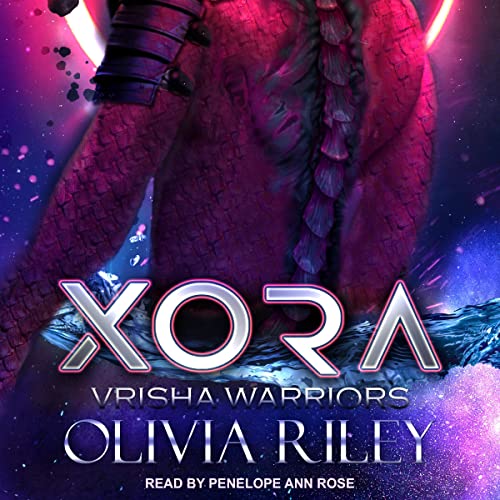 By: Olivia Riley
Narrated by: Penelope Ann Rose
Try for £0.00

He takes over one of the substations, forcing the workers out. At the whim of her job, Grace is unwillingly chosen to go below, maintain the station, and stay with the horned, devilish alien.

That is how she comes to encounter Xora. An alien born from a race of dominant fighters and fierce hunters. He is as terrifying as he is mysterious. While also commanding, stubborn, unrelenting . . . and oddly mesmerizing. As her fear slips away, other emotions begin to take hold. And Grace finds she wants to know more.

Xora just wants to get off the cold, watery world as quickly as possible. Yet, despite his indifference to humans, he finds his attention captured by Grace. Against his own nature, he allows her near him. He's just too . . . curious.

For Grace, working with Xora could be dangerous. But when he desires her help on a secret mission, Grace can't refuse. Even if it could mean putting her job and life (and heart) at risk.

For Xora, Grace's help could be his best chance at getting home. Assuming he can keep his growing feelings for the bold woman from making him lose sight of why he's on Oceanus in the first place.

What listeners say about Xora

These books are great. Storyline is interesting but sexy time is limited and could be more detailed. I would put these more in the realm of sci-fi rather than romance. A really fun story and definitely worth the credit, just as all the other Vrisha Warrior books are!

Another great one! This author is absolutely awesome!
Love it. How great it is! I just downloaded another.

I’m really into this genre right now and this book was a great find. A lot of books in this genre are either too short, narrators that I just can’t stand to listen to and/or a plot ofw that’s just plain ridiculous. This felt fresh and absolutely like a way we could live in the future. I liked Graces character…smart and self-reliant, a hard worker and a little bit tough, but not cocky. She felt like a lot of real women I know. No whining or playing games. Really enjoyed this and will follow this author to purchase many more of her novels :-)

I personally think this story was a bit too long and extremely predictable, but it was still overall enjoyable. The romance is simple and sweet, but nothing steamy. The drama and action are good too. I mean this is a solid average story and good is the best description. To me Olivia Riley just turns out books that are like this B movies - a little action, drama, and romance with ok characters.

The best thing to me was Penelope Ann Rose's narration. I was very skeptical at first, but was quickly on board with her voice acting and consistency with the characters. Will add her to my list of narrators to look for in other audiobooks.

The storyline was different from other books in this genre; I’ve noticed this with new PNR books lately. It is refreshing to listen to PNR books with a different storyline. The narrator did a great job with characters; does a good job with male and female characters. Waiting for the next book in series to release.

I absolutely love this book! The story is well-written and developed in an organic way.

This was a very good adventure that kept me engaged from beginning to end. I didn’t realize it right away, but there were some vague references to book 1 of Ms. Riley’s Dark World Mates series. It makes me want to go back and re-read that book. But, like I said, the references were vague which does not add or take away from this book. Also, even though there was some erotica, it wasn’t so much so that it just literally consumed the book. It was the kind of romance that I enjoy. Ms. Rose’s performance added to the story. I look forward to the next book in the series.

I love this book just like her other series this one is going to be just as amazing I can’t wait for the next book!!!