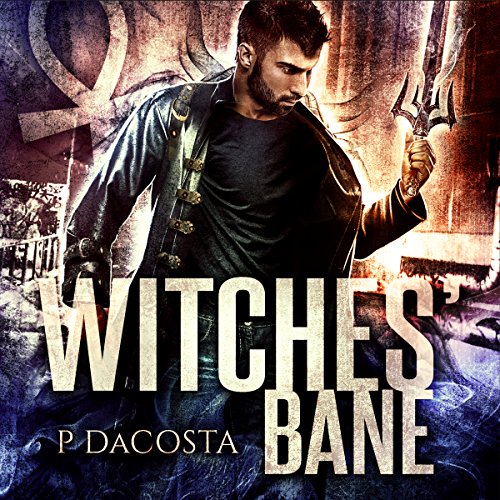 By: Pippa DaCosta
Narrated by: Paul Woodson
Try for £0.00

Witches are disappearing all over New York, and Ace Dante couldn't care less - until one holds his friend at gunpoint, demanding Ace take the job.

The witch produces a girl's severed arm, bearing an unusual hieroglyph, and Ace starts to care a whole lot more. He recognizes that mark. It's connected to Ace in ways he doesn't yet understand. Why is it on a dead witch's arm?

Missing witches and severed arms aren't Ace's only problems. With a new name around his neck - Godkiller - Ace has a promise to uphold. He has three days to kill the god Thoth - or risk Osiris's wrath. The last time Ace defied Osiris, he earned a curse that crippled his life and turned him into Osiris's puppet for eternity.

This time, Osiris won't be as lenient. Ace must kill Thoth. An impossible task. It takes a god to kill a god, and Ace is just a washed-up mercenary. Isn't he?

As the spells are cast and the truth is revealed, there's only one way out. Ace must become the monster the gods fear him to be.

What listeners say about Witches' Bane

It is series Gold Medal!

I was disappointed with book one. After studying my Egyptology, I can say enjoyed book 2. Ace is still Osiris’ whipping boy and still having wet dreams about Isis. I love the dialogue as Ace talks to himself. RETRIVE my tablet. RETRIVE, RETRIVE, RETRIVE. Ace is frantic to complete his task to eliminate the demanding command filling his head. This book was filled with excellent action, wonderful and dark characters, and a sense of humor.

Shu and Ace have a symbiotic relationship. In addition to having a work relationship, it is in Shu best interest if Ace lives. Without Ace, Shu will be thrown into the underworld and served up as the meal for the day for the demon residents.

Ace has a love and hate relationship with his foster mother. Just to be able to tell her to go fuck herself, Ace agrees to kill a god. His issue with his mother, she gave him to Osiris.
The Egyptian Gods are deliciously evil, beautifully twisted, delightfully wicked, enchantingly devious, exquisitely depraved and gloriously malevolent.

Their home is burning above them, of course, they are allowing it to burn. They have cast a spell on their staff. The people cannot detect the fire in any way. That is right it is raining fire around them and guess what? Osiris and Isis are making lusty love. They are not interested in anyone/thing but them. Sorry correction, Osiris did order Ace to stay and watch. So you know what was going on in his mind? WATCH, WATCH, WATCH.

Ace is compelled to kill Thoth at Osiris's command and even though he knows he doesn't stand a chance against someone that powerful he also knows that Osiris will take it out of his friends and allies if he fails. Throw in murdered witches, missing memories and meddling gods with plenty of time on their hands to play a very long game, and Ace's life has hit an all-time low point.

Pippa DaCosta has re-earning my fan praise. I became disappointed with Muse in The Veil series. The Chaos Rises series is a poorly written stepchild of The Veil series. The Soul Eater is a totally different UF from DaCosta. Ace is a strong character whom I can respect. As I stated in book one, integrating Egyptology, when Greek is more common makes her a risk taker.

Another great story but, too short for a credit

First of all, sometimes the narrator sounds like Keanu Reeves (in a good way). This added to my enjoyment b/c even though Keanu Reeves is older than what Ace looks like - I still pictured Ace as Keanu.
I read the first book. It always makes me nervous to listen to a series I started reading but, this narrator did a great job. He was exceptional with Ace and Osiris. He did a good job with the female characters too and that is where many male narrators struggle.
It was another great story, original and kept my attention. Character development occurred especially for Ace and Shu. Can't wait for the third book.
HOWEVER, this is less than 5 hours long. This was way too short for a credit. I will continue to read the series but, save my credits for longer books or wait for a sale.

Witch's Bane by Pippa DaCosta continues Ace's story but now he has even more trouble. He never did kill that god, Though, that the sadistic Osiris wanted him to. Osiris is very powerful and will make death seem like a good thing if Ace doesn't do as promised. Although he will probably die trying.
Someone is also killing witches and Ace gets wrapped up in helping find out who is doing this!
Great narration!

I enjoyed listening to it, and liked the plot ideas more than book 1 but the writing felt as though the author maybe wasn't as into it as before.

Would you recommend Witches' Bane to your friends? Why or why not?

If they were huge fans of urban fantasy and Egyptian mythology, sure.

Would you listen to another book narrated by Paul Woodson?

Do you think Witches' Bane needs a follow-up book? Why or why not?

It ends on a cliffhanger, so yes.

Could have been better but it's definitely not bad, and I had a fun time.

I really was bored with this book

Would you try another book from Pippa DaCosta and/or Paul Woodson?

yes, but this book unlike the other ones I have was slow and boring.

What was most disappointing about Pippa DaCosta’s story?

I like her stories but this one I did not.