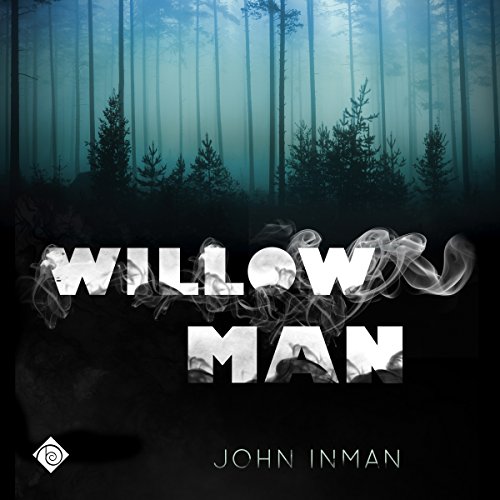 By: John Inman
Narrated by: Austin Rising
Try for £0.00

Woody Stiles has sung his country songs in every city on the map. His life is one long road trip in a never-ending quest for fame and fortune. But when his agent books him into a club in his hometown, a place he swore he would never set foot in again, Woody comes face to face with a few old demons. One in particular.

With memories of his childhood bombarding him from every angle, Woody must accept the fact that his old enemy, Willow Man, was not just a figment of childish imagination.

With his friends at his side, now all grown up just like he is, Woody goes to battle with the killer that stole his childhood lover. Woody also learns Willow Man has been busy while he was away, destroying even more of Woody's past. And in the midst of all this drama, Woody is stunned to find himself falling in love - something he never thought he would do again.

As kids, Woody and his friends could not stop the killer who lived in the canyon where they played. As adults, they might just have a chance.

What listeners say about Willow Man

A well written story with and interesting  concept.  The characters are likeable and the narration is very good.

A very Sinister Monster. This book is scary.


I love John Inman's superb story telling. His romance novels are humorous and engaging. And his mystery/ suspense/horror stories are excellent at capturing the imagination with villians that are terrifying.
Some people have compared this story as being similar to King's It. And yes it does have a group of reunited childhood friends who experienced an unimaginable horror as children, and are on a mission to defeat a monster who makes Pennywise seem tame. The monster in this story is so evil, so excrutiatingly perverted that it was at times difficult to listen to.
But also oh so compelling, the combination of Mr Inmans story and Austin Rising's narration had me tuned in completely.
Woody, who returns home after many years away,and his reunion with his childhood friends was appealing, the flashbacks to their memories of that nightmare summer were poignant and so sad. Memories of Woodys' parents, and their friend Bobby's fate was just heartbreaking. A malevolent ghost who is corporeal and chillingly depraved. Inman has composed one of the scariest fictional villians I've read in a long while.
And it wouldn't be a John Inman book without a dash of sweet romance to temper the horror. I thought Woody and Jeremy were a believable couple, Two men who were strangers as adults, yet united in good and bad childhood memories. They were two lonely, and alone men who found strength in each other.
This is definitely one of my favorite listens of this year. I had previously read this book, but the audio version was very well done.
“AUDIBLE 20 REVIEW SWEEPSTAKES ENTRY”

Original Audiobook Review October 2020:
It's been three years since I read Willow Man and let me tell you it is just as brilliant now as it was then, and just as creepy. As I said in my original review, I don't want to give anything away and with stories such as this every little bit can be a spoiler. So I'll just comment on the narrator, Austin Rising. I've never listened to an audiobook narrated by him before but I look forward to listening to more of him. The range of voices for the characters adds another level of depth to the story that I found actually made it even creepier, which I didn't think was possible. One of the boxes I mentally tick when listening to audiobooks is the ability to see the story unfold, that which becomes remnant of the old radio shows of the 30s and 40s I collect. Well, the combination of Austin Rising's narration and John Inman's words had me expecting to hear the announcer with the sponsor ad at the chapter breaks😉. So much Halloween reading goodness packed into the Willow Man, it may just become a holiday tradition.

Original ebook Review October 2017:
Woody Stiles is forced to face his past when he's booked to sing at a local club but he swore he'd never return. With his parents gone and despite his determination to never return Woody was never able to let go of their home so to save some money, he foregoes the usual hotel and stays in his childhood home. The past he wanted to forget has returned, can Woody and his friends defeat what lurks in the canyon or will they be the next victims?

To followers of my blog and reviews it is no secret how much I enjoy John Inman's creative spookiness, Willow Man is my fourth Inman tale this Halloween season and although I am about to temporarily leave behind the freaky tales for tales of Christmas soon I will definitely be returning to read more from his backlist. One of the things I like best about John Inman is that no matter how creepified I get, I also am left warm-hearted at the love and friendship that he puts into his characters.

As for Willow Man itself, well when dealing with creepy, freaky, and spooky I find it hard to write a review because I just don't do spoilers and when reading these kinds of tales every little element can be a clue or giveaway. So let me just say this: WOW! DOUBLE WOW! and HOLY HANNAH BATMAN! If you're wondering what I'm "WOW-ing" and "BATMAN-ing" about well I could simply say "read for yourself"(I am saying that😉) but I am also adding that if you are afraid of the dark than be sure you read Willow Man during the day with all the lights on.

I should add that I know a few people who find flashbacks/back story spread throughout to be a little distracting but for me I find it thrilling and a bit exhilarating. Frankly, if we learned everything from the past all at once the element of surprise would be lacking and heaven knows that in tales of creepiness, anticipation can be everything. A definite addition to my spooky library.

Narrator Austin Rising delivered a horrifying freaky thriller, chilling my spine as stiff as Lucifer’s ramrod. His smooth delivery was a little slow like too hot margarine, but I rectified that by listening at 1.5 speed. He was able to bring a variety of voices to the story and I appreciated him changing his voice so I could easy identify Woody and his friends as children and then again as adults. The most outstanding capability was his voices for Willow Man. That was some creepy shit. Additionally, Willow Man changed into several personas and those hit my funny bone in all the right places.

I’m not giving a drop of the tripping plot away. The plot and character development starts out a little slow and skimpy, but soon the strangeness took hold and I was intrigued. The ridiculousness of it all, played my “why the fuck would you go and look?” tape over and over, making this a true thriller, that I could easily be seen made into a movie.

So this evil entity does not die, the thing haunts children, he does not only kill them viciously, he rapes them and if it happens to children, it tends to be so much worse for me.

So, if you want to listen to something different and dark. Gifting you with nightmarish evil psychopathic dead bodies chasing you, then this audiobook is definitely recommended to scratch that sick itch.

A true horror. I was expecting a dark story, but I’ll warn you, this one is inky black. Nightmare inducing.

John Inman writes suspense and horror that grips you so you can't stop listening until the end. With none of his trademark humor in this story, it is gritty and scary.
The characters are all strong and likable. Well, except for the demon, of course. And though the creature is never called a demon, that is truly what he is to me.
I feel I can't leave a review without mentioning what happens to Bobby could be a trigger for some. Don't go into this story expecting something light.
I don't think I've ever heard Austin Rising narrate before. I feel he did a great job with the narration. Between John's great descriptions and Austin's narration, it was easy to see the scenes in my mind and even hear the fire crackling.
If you like horror, don't pass this one up.