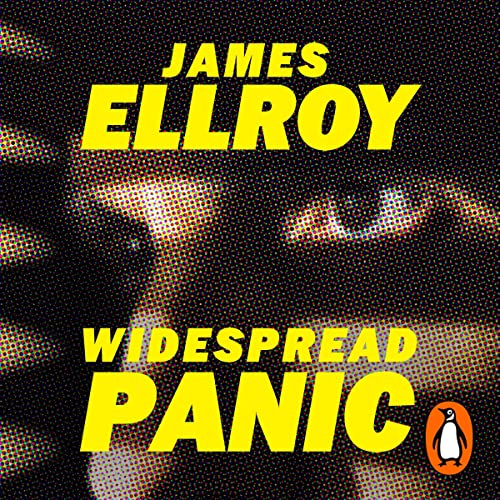 By: James Ellroy
Narrated by: Craig Wasson
Try for £0.00

Freddy is an ex-LA cop on the skids. He snuffed a cop killer in cold blood—and it got to him bad. Now he's a sleazoid private eye, a shakedown artist, a pimp—and, most notably, the head strongarm goon for Confidential magazine.

Welcome to the world of the malevolent monarch of the Hollywood underground—a tale of pervasive paranoia teeming with communist conspiracies, FBI finks, celebrity smut films and strange bedfellows.

In Widespread Panic, we traverse the depths of '50s LA and dig on the inner workings of Confidential. You'll go to Burt Lancaster's lushly appointed torture den; you'll groove overhyped legend James Dean as Freddy's chief stooge; you'll be there for Freddy's ring-a-ding rendezvous with Liz Taylor; you'll be front and centre as Freddy anoints himself the 'Tattle Tyrant Who Held Hollywood Hostage'.

"Purgatory is rarely this much fun." (Financial Times)

What listeners say about Widespread Panic

if there there is a more daring or stylish or brilliant prose writer in the English language she is well hidden. This is classic James Ellroy, taking is craft to extremes as always, with the familiar labyrinthine, Byzantine tale of amorality, vice and corruption in the mid-twentieth century, told from the perspective of Freddy Otash, former LA cop and now reporter for “Confidential” magazine. as such Widespread Panic is written in a buckshot alliterative style (think cold six thousand, only alliterating)which could be a disaster but in Ellroy's extraordinary hands, becomes a rhythmic, hysterical, riot. I can't pretend to have followed everything that was going on, but it was presented with such energy and brio that it really didn't matter. This is epic poetry for the 21st century.

A shout-out to reader Craig Wasson, who was clearly having as much fun narrating as Ellroy did writing it. He nails the tone. Unmissable.