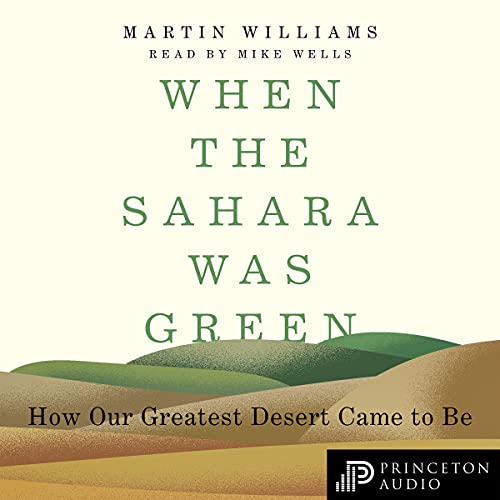 When the Sahara Was Green

By: Martin Williams
Narrated by: Dr. Mike Wells
Try for £0.00

This audiobook, narrated by Mike Wells, traces the history of how the Sahara was transformed from a green and fertile land into the largest hot desert in the world.

The Sahara is the largest hot desert in the world, equal in size to China or the United States. Yet, this arid expanse was once a verdant, pleasant land, fed by rivers and lakes. The Sahara sustained abundant plant and animal life, such as Nile perch, turtles, crocodiles, and hippos, and attracted prehistoric hunters and herders. What transformed this land of lakes into a sea of sands? When the Sahara Was Green describes the remarkable history of Earth’s greatest desert — including why its climate changed, the impact this had on human populations, and how scientists uncovered the evidence for these extraordinary events.

From the Sahara’s origins as savanna woodland and grassland to its current arid incarnation, Martin Williams takes us on a vivid journey through time. He describes how the desert’s ancient rocks were first fashioned, how dinosaurs roamed freely across the land, and how it was later covered in tall trees. Along the way, Williams addresses many questions: Why was the Sahara previously much wetter, and will it be so again? Did humans contribute to its desertification? What was the impact of extreme climatic episodes — such as prolonged droughts — upon the Sahara’s geology, ecology, and inhabitants? Williams also shows how plants, animals, and humans have adapted to the Sahara and what lessons we might learn for living in harmony with the harshest, driest conditions in an ever-changing global environment.

A valuable look at how an iconic region has changed over thousands of years, When the Sahara Was Green reveals the desert’s surprising past to reflect on its present, as well as its possible future.

What listeners say about When the Sahara Was Green