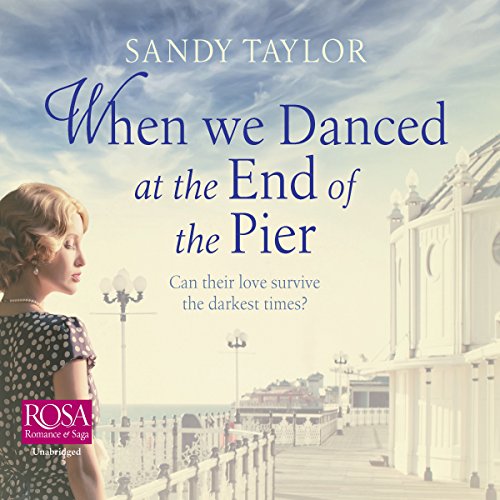 When We Danced at the End of the Pier

By: Sandy Taylor
Narrated by: Rebecca Courtney
Try for £0.00

Brighton, 1930: Maureen O'Connell is a carefree girl, but war is looming, and life will never be the same again.

Jack and Nelson have always been dear friends to Maureen. Despite their different backgrounds, they've seen each other through thick and thin.

The candle Maureen's always held for Jack burns bright, but just as she's found love, war wrenches them apart. With Jack no longer by her side and Nelson at war, can Maureen look to a brighter future?

"It has all the ingredients for a perfect read: fantastic, loveable and very real characters, an emotional and compelling storyline, and a brilliant setting in time and place." (Louise Douglas)
"I loved this novel so much, even though it’s probably the most heart-breaking story I’ve read all year...it will totally absorb you and capture your heart." ( That Thing She Read)

Loved this book although sad in parts it was a wonderful story and the narration was excellent.

Another great book, I think I may have listened to it in the wrong order but ha ho, still a wonderful audio

I cried, laughed and smiled. Great book highly recommended. I will be checking out other books by this author.

Such a wonderful, gentle book - a joy to read and listen to! Well narrated and the characters truly came to life. Liked it so much that I've just bought the second book in the series!! Thoroughly recommend this!

This novel is based around a group of children growing up in Brighton prior to and during WW2.
As beautiful and heartbreaking as any wartime love story. Beautifully narrated by Rebecca Courtney, the story follows the children from a very young age to aduthood with all tbe laughter, heartbreak and sorrow growing up can bring. This is a very good novel, highly recommended...but if I hear the word "daddy" one more time I might just scream!
A must read for all wartime romance fans!

I really loved it, it was a lovely story, the reader was super. Will look for more by the author.

Absolutely loved the first two books and couldn't wait for this to be released.
Loved the story from start to finish. Very sad in places but laughed out loud at others.
Highly recommend for a feel good lovely book 🙂📚