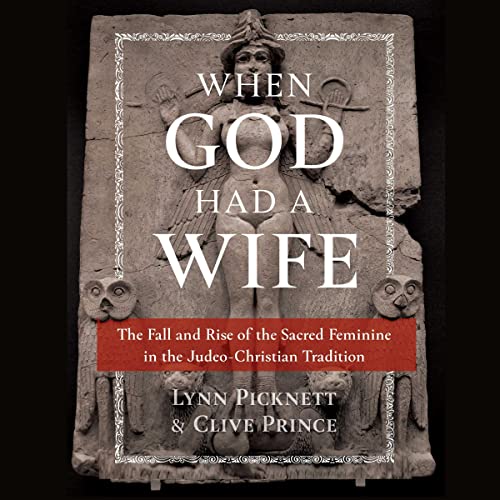 When God Had a Wife

By: Lynn Picknett,Clive Prince
Narrated by: Theresa Windmann
Try for £0.00

Despite what Jews and Christians - and indeed most people - believe, the ancient Israelites venerated several deities besides the Old Testament god Yahweh, including the goddess Asherah, Yahweh’s wife, who was worshipped openly in the Jerusalem Temple. After the reforms of King Josiah and Prophet Jeremiah, the religion recognized Yahweh alone, and history was rewritten to make it appear that it had always been that way. The worship of Asherah and other goddesses was now heresy, and so the status of women was downgraded and they were blamed for God’s wrath.

However, as Lynn Picknett and Clive Prince reveal, the spiritual legacy of the Jewish goddesses and the Sacred Feminine lives on. Drawing on historical research, they examine how goddess worship thrived in early Judaism and included a pantheon of goddesses. They share new evidence for an earlier form of Hebrew worship that prayed to both male and female gods, including a 20th-century archaeological discovery of a Hebrew temple dedicated to both Yahweh and the goddess Anat. Uncovering the Sacred Feminine in early Christianity, the authors show how, in the first century AD, both Jesus and his great rival, Simon Magus, were attempting to restore the goddess-worshipping religion of the Israelites. The authors reveal how both men accorded great honor to the women they adored and who traveled with them as priestesses, Jesus’s Mary Magdalene and Simon’s Helen. But, as had happened centuries before, the Church rewrote history to erase the feminine side of the faith, deliberately ignoring Jesus’s real message and again condemning women to marginalization and worse.

Providing all the necessary evidence to restore the goddess to both Judaism and Christianity, Picknett and Prince expose the disastrous consequences of the suppression of the feminine from these two great religions and reveal how we have been collectively and instinctively craving the return of the Sacred Feminine for millennia.

“A book that blows the lid off one of the most ancient cover-ups in the world--the existence of a feminine deity every bit as important as the masculine Yahweh. This is a book that all should read--it is powerful, thought-provoking, and wonderfully contentious. The scholarship of the writers is evident on every page. So read on and be prepared to be astounded and diverted. Your world may never look the same again.” (John Matthews, coauthor of Temples of the Grail and The Lost Book of the Grail)

“Lynn Picknett and Clive Prince are two of the most important history writers of modern times. They build a compelling case for the veneration of the goddess alongside the religion of Yahweh among the ancient Israelites and how its persistence lingered through to the age of Jesus. A page-turning read from start to finish.” (Andrew Collins, author of The Cygnus Key and Göbekli Tepe)

“Picknett and Prince, long known for profoundly unsettling religious and historical revelations, have excelled themselves with this story of the little-known Israelite goddesses--their rise, fall, and, unexpectedly, their rise again. But now we are also faced with another deeply uncomfortable cover-up--that of the priestesses who celebrated the goddess even from within Christ’s own circle. A major book and a gripping read.” (Graham Phillips, author of The Virgin Mary Conspiracy)

What listeners say about When God Had a Wife

An insight into female deity

This is a fascinating book which threads a tale of the feminine deity throughout judeo-christian history. Not sure how much is fact and how much splendid speculation and tale telling, but it is a very interesting read

If they would have said Isis, I might would have bought it. the canaanite Gods were into child sacrifice which the Jewish God despised. That would have been an impass from the start. This was not even discussed probably because it weakened the argument. Needs more research rather than just speculation.

The content was quite intriguing. I found the historical facts presented very enlightening but found some of the conclusions drawn by the author no less opinionated than some of the opinions of the church she derided in her writings. If she had refrained from the obvious bias she clearly holds, the book would have been much better.

The reader is HORRIBLE!!! Mispronounced words, a lack of understanding of the context she was reading about, and misplaced inflections made it harder to listen.

over all a good book

the only thing is the narrator took some getting used to and her mispronunciation of some words was a bit irritating.
but worth the listen.

I didn't even get through chapter one solely based on the performance. I don't want to listen to an audio book with words painfully over pronounced and even completely mispronounced. No one noticed this while recording? Example, it is not pronounced "eXpecially". I expect more from professionals.

This book was awesome! I did find the mispronunciation of Hebrew, Greek and Latin to be incredibly annoying, however, as much of the book references important textual evidence from these languages. One word I can forgive, but this was a kind of laziness on the part of the audiobook creators that really annoyed me. The narrator needed someone who could help them pronounce these words correctly- especially when referring to Hebrew sacred words. The book was wonderful, but the constant mispronunciation made it hard to listen too. I suggest reading the book.

This is a fascinating book. I really enjoyed the things it brought up a lot of interesting points I look forward to learning more about. It makes perfect sense that any deity in the ancient Middle East would have a consort since virtually every other deity of the same era did.

Unfortunately, I wish I had gotten this in print. Initially I thought the reader was an author because of their rough style compared to other books read by other performers. No, this is a reader hired for the gig. The book is worth it if you find the topic interesting, but be prepare for awkward pauses, mispronunciations, and unfamiliarity with the subject matter.