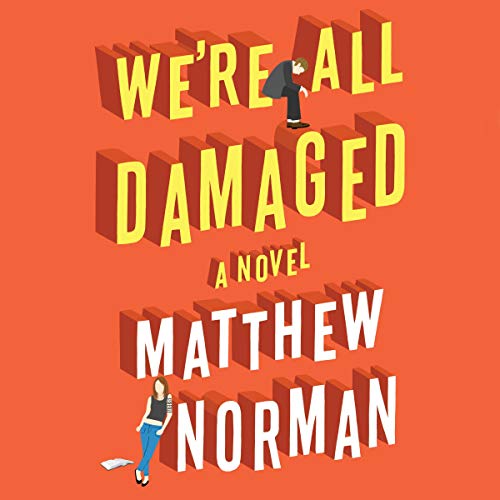 By: Matthew Norman
Narrated by: Scott Merriman
Try for £0.00

Andy Carter was happy. He had a solid job. He ran 5Ks for charity. He was living a nice, safe Midwestern existence. And then his wife left him for a handsome paramedic down the street.

We're All Damaged begins after Andy has lost his job, ruined his best friend's wedding, and moved to New York City, where he lives in a tiny apartment with an angry cat named Jeter that isn't technically his. But before long he needs to go back to Omaha to say good-bye to his dying grandfather.

Back home, Andy is confronted with his past, which includes his ex, his ex's new boyfriend, his right-wing talk-radio-host mother, his parents' crumbling marriage, and his still-angry best friend.

As if these old problems weren't enough, Andy encounters an entirely new complication: Daisy. She has fifteen tattoos, no job, and her own difficult past. But she claims she is the only person who can help Andy be happy again, if only she weren't hiding a huge secret that will mess things up even more. Andy Carter needs a second chance at life, and Daisy - and the person Daisy pushes Andy to become - may be his last chance to set things right.

What listeners say about We're All Damaged

Well this book starts off with Andy who appears to have it all. A good job, a wife he adores until during a dinner date with her she says she wants to leave him. The affect of her decision has a terrible affect on him. We see him spiralling out of control then he leaves for another city to start again. He is a bartender and not getting very far and everything in his life is mediocre.

One day Andy receives a call from his mother to come home as his Grandfather is dying. We then see a catalogue of errors on his part, not to mention his family and their secrets.

This was a book I picked free on FirstbReads as it is called now a few years ago, not what I would choose now but there were some comical moments and the swearing sometimes felt like swearing for swearing sake, not always needed.

I kept wondering "wot was the purpose of the story" there wasn't one!
I describe this book as long drawn out about nothing!
Didn't make me laugh once ,not a book id describe as humorous at all.

I bought it because of the reviews, but I think I read a different book.

It was just ok. The excessive use of profanity was off putting, since I like to listen around the house and I have young children. The story was OK, but the main character never did anything. Life just happened to him. He never becomes proactive about any problems that face him. Luckily, a manic pixie dream girl comes along to fix his life. But at the end he remains as passive and unimpressive as ever.

We're All Going to Avoid This One

It took me a long time to finally finish We're All Damaged. It happens every once in a while that a book just doesn't connect with me. I started We're All Damaged as my book to read before bed and sadly for that category you have to be pretty great to keep my attention.

Two weeks ago I decided to stop lingering and actually pushed through. We're All Damaged follows Andy Carter who coming off of a divorce where his wife cheated on him isn't in a good place. He's moved from Omaha to New York City to start over and that's not going well. When he hears about his Grandfather's failing health he goes back to Omaha and has to confront everything he ran away from.

If that didn't sound cliche enough (should have been my warning to not read this book), the rest of the novel doesn't get any better. First off the writing is really bad. The way in which Matthew Norman writes for the female characters is downright laughable. The characters all sound like they were written from a male perspective. About half way through the book Andy Carter meets Daisy and that whole relationship/story/dialogue is a train wreck. I actually audibly laughed/scoffed more times than I care to even count.

I'm not sure why I finished We're All Damaged. I probably should have given up on it long ago. There was nothing redeeming about this book. None of the characters really have a beginning, middle or end. They are just there. And in some cases that can work but this is a book that's written like a middle of the road romantic comedy, and ends up being a really bad one.

Andy's Journey of Trying To 'Let It Go'

We're All Damaged is about a character named Andy Carter who is dealing with the after effects of his marriage falling apart. I want to say this was a "finding & empowering yourself" message, but it really wasn't. Andy didn't necessarily wallow in self pity parties but he didn't do anything to fix his situation either. Life just kind of happened to him and put him in different scenarios and he just followed the pieces as they fell.

There were some characters who just fit into the stereotypical versions of themselves with no real depth, like his mother, brother, bartender black friend and to a certain extent the gay guys. There were some sweet moments that revolved around his time and memories with his grandfather. I was a little disappointed that for Daisy to be one of the main characters that she seemed one dimensional throughout most of the book.

One issue I had with the book was the unnecessary use of profanity. I mean I don't mind cursing in stories, but it seemed like the author was just putting in swear words just to put it in, not cause it emphasized any point or statement. It was like he had a goal to include X amount of curse words in the book, so he looked for random places to put them to reach his goal.

The narrator did an excellent job. The characters all sounded different and were distinguishable. Overall I'd give this book a solid C. It wasn't great, nor was it bad. It had funny and frustrating moments, caring and confusing times, but in the end, it was the life of Andy and we just followed a piece of it.

This book compelled me to....

...seek out more titles from its author! Listening to this book felt as if the narrator and I were sitting comfortably on a sofa somewhere as he told me about his life. Narration was natural and spot-on. Story was very well-written, kept my interest from the start, and I love the way it unfolded. The profanity was natural to the events and not excessive as one reader mentioned. She needs to get earphones if she plays adult books in front of children! Look forward to listening to more from Matthew Norman.

Cool storytelling about a 30s something living life and just being normal. Relating everything to movies and 90s television shows. The jokes come fast

I was a bit skeptical about this book from the cover art and the description, but the sample audio hooked me. The narrator is perfect for this the laugh out loud story with sentimental pieces. This is a solid piece of work and is a good value for the price or a credit. Don't let the cover art fool you. This is a quality book.

Kept me interested the whole time. Easy read. entertaining. the narrator did extremely well. I belly laughed in a few places.

"We're All Damaged" is a story about Andy Carter, a guy who was divorced a few years ago, and is still fucked up from it. She's with a new guy and everyone around him is telling him to move on, but he just can't. Meanwhile, his grandfather is dying back in his hometown, so he had to go down there to be with his family and unfortunately, that means being near the woman that broke his heart.

What follows is a series of alternately and sometimes simultaneously funny and sad misadventures as Andy tries desperately to work through his shit, and with the help of a mysterious girl named Daisy, possibly even be happy again.

What makes this book so great, to me, was the way it acts as a story, but also a snapshot of the citizens of Omaha, Nebraska. It checks in on different characters in Andy's life, characters that seem to be one note cliches, but actually turn out to be layered people that, by the end, you feel like you're best friends (or worst enemies) with. Every character had their quirks and their damages, hence the title.

Funny, sad and anchored by a fantastic cast of characters. This book is amazing, and I recommend it to anyone who liked Apatow's Love on Netflix. 5/5

one of the best books I have encountered in the last decade. really. I laughed so loud people were giving me looks.

Wasn't too sure..but so glad I did!

I wasn't sure to be completely honest about getting this book because I typically don't read male authors, weird I know....but this book was thoroughly enjoyable and the narrator did an excellent job! if you're on the fence, go for it!