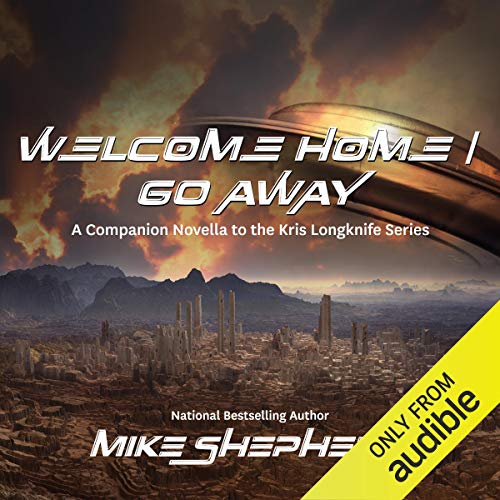 An original novella in the "fast-paced, exciting military SF series" featuring Kris Longknife. Kris Longknife is back home from her galactic adventures, but her entire Fleet of Discovery has been annihilated. Now, humanity finds itself at war with an alien race more monstrous than anyone could have possibly imagined. General Terrance "Trouble" Tordon, Kris’s great-grandfather, is given the task of calming the panicked politicians, some of whom blame Kris for the disaster and would like to eliminate the ever-bothersome Commander Longknife. But as "Trouble" struggles to defend his Kris, the level of uncertainty among the civilians leads to more panic and a rush to judgment that makes him believe that he’s facing a fight he’s bound to lose….

What listeners say about Welcome Home/Go Away

This is book nine and half or a novella in the Longknife series. It comes right after “Daring” book number nine. You must read these books in order otherwise you are lost.

This is a background novella telling what problems Kris’s family has been caused by her battle with the aliens. The novella focuses on Kris’s great grandfather General “Trouble” Tordon. He has been tasked with the job of calming the panicked politicians, who blame Kris for the disaster and pending war. The want to court marshal Kris for Crimes against humanity.

The book looks at the ending of “Daring” book number nine from a different point of view than from Kris’s. It is great to get a boarder insight into the politics of Wardhaven and the plants of human space.

The book is well written and this story provides some back story to some of the other characters. The question I have is can grandpa Trouble help save Kris or not? I enjoyed learning more about great grandma Ruth and great grandpa Trouble. We first met Ruth when Kris went to New Eden, Ruth was teaching at the college. Dina Pearlman does an excellent job narrating the book.

flat voice. as if read in a barrel, good interlude

This story is really too short to be of interest, too bad Audible Inc value it as a whole story.

Good back story but if you are a member pay don't burn a credit. A credit can get you the next full book in the series.

More on Trouble and Ruth

A nice look at the end of Daring but from a different perspective: Kris' grandfather Trouble. We get a nice view into the great relationship that Ruth and Trouble share as well as their concern for Kris and her well being. This is also a bridge that explains how Kris ends up in "Siberia" and separated from her friends and Jack in the next book, Furious.

This is a short novella but meaty enough to be worth the read. It will give more insight into Trouble as well as how deep King Ray has his head buried in the political machine. The theme of the book is that Ruth's love saved Trouble but when Ray lost his wife Rita, he lost too much of his humanity at the same time.

Meh. The Kris Longknife novels are much more entertaining, in my opinion, than the novellas.

Powerful Addition to the Longknife Series

So much of the enjoyment of the Kris Longknife Series comes from the interplay of its likeable cast of characters in an engrossing world. "Welcome Home, Go Away" gives us a deep look into Kris' family and the conflicting struggles in this family of Legend. I love these characters and their deep bond that is the foundation of Kris' World. This is an enjoyable addition to the Longknife Saga.