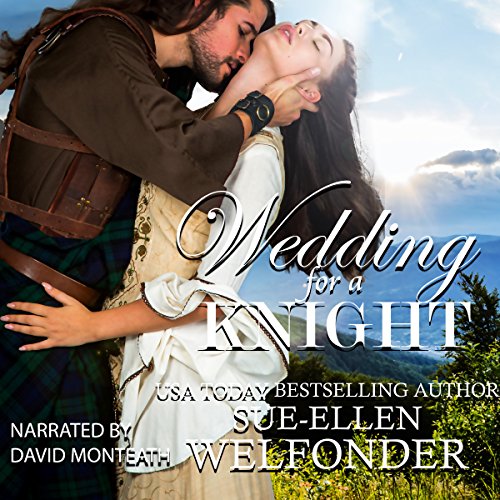 Wedding for a Knight

By: Sue-Ellen Welfonder,Allie Mackay
Narrated by: David Monteath
Try for £0.00

Be swept away to medieval Scotland with USA Today best-selling author Sue-Ellen Welfonder (also known as Allie Mackay) in an unforgettable tale where a Highland hero's honor is only matched by his lady's scorching passion....

Centuries ago, the bride of Reginald of the Victories took her life. The stones of their home Coldstone Castle iced over, ill fortune plagued the clan and everyone knew the chief's dead bride had cursed them. However, they believed that as long as the clan's fleet sailed the seas, the curse would not consume them. But now, the fleet has been destroyed and the clan has lost its wealth and power.

After years on the tournament circuit and warring, Sir Magnus MacKinnon heads home with enough wealth to rebuild his clan. But he is robbed of his silver. Defeated, he arrives at Coldstone Castle penniless to find his wily father has married him by proxy, and is already spending his wife's dowry.

Magnus is honor-bound to bed his new bride, but he refuses to spend any more of her money. If necessary, he'll return to the tournament circuit and win another fortune. However, Lady Amicia proves a greater opponent than any he's ever faced on the battlefield. She's after his heart, and her weapon is scorching passion. But before she can win his love, she must find the saboteur who wants to kill her and keep the curse alive.

What listeners say about Wedding for a Knight

Far too long and wordy. I barely finished it. Kept having to fast forward through it.