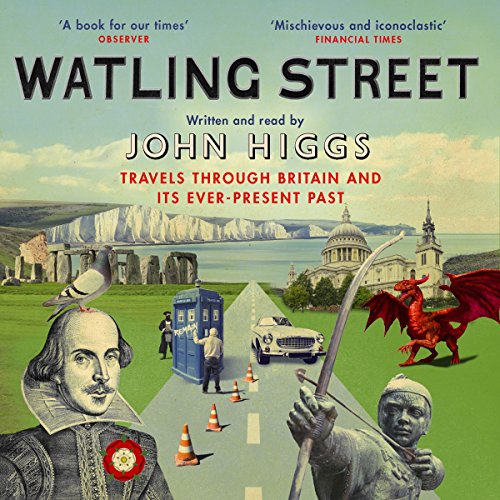 A journey along one of Britain's oldest roads, from Dover to Anglesey, in search of the hidden history that makes us who we are today.

Long ago a path was created by the passage of feet tramping through endless forests. Gradually that path became a track, and the track became a road. It connected the White Cliffs of Dover to the Druid groves of the Welsh island of Anglesey, across a land that was first called Albion then Britain, Mercia and eventually England and Wales. Armies from Rome arrived and straightened this 444 kilometres of meandering track, which in the Dark Ages gained the name Watling Street. Today, this ancient road goes by many different names: the A2, the A5 and the M6 Toll. It is a palimpsest that is always being rewritten.

Watling Street is a road of witches and ghosts, of queens and highwaymen, of history and myth, of Chaucer, Dickens and James Bond. Along this route Boudicca met her end, the Battle of Bosworth changed royal history, Bletchley Park code breakers cracked Nazi transmissions and Capability Brown remodelled the English landscape. The myriad people who use this road every day might think it unremarkable, but, as John Higgs shows, it hides its secrets in plain sight. Watling Street is not just the story of a route across our island but an acutely observed, unexpected exploration of Britain and who we are today, told with wit and flair and an unerring eye for the curious and surprising.

"Myths combine with staggeringly fascinating facts, while Higgs' take on our national imagination and the nature of history is refreshingly original.... [A] mad, but brilliant, odyssey." (Rebecca Armstrong, I Paper)

"It's erudite, funny, philosophical, often wildly esoteric and packed with factual asides.... Above all Watling Street provokes a new and exciting discourse on national pride and identity. You can hear the singing of our ancestors in a chorus of shared heritage whose melody is steeped in the land." (Charlie Connelly, New European)

What listeners say about Watling Street

Not a travel journal

I love a good travel journal, especially those about the UK. To that end I thought this would be a great read. As a travel book you don't learn a great deal about the places along the way, more about local "celebrities". For example in Northampton you get an hours love in with the author's favourite Alan Moore. Similarly in Canterbury you get an in depth about a local postman.

So as a travel journal I was disappointed, but having said that, there's plenty of interest.

Uniformly irritating for the first four chapters then admitted defeat and listened no more. Without even the saving grace of witty irony or an engaging narrative style.

Another fantasic book from John Higgs

John Higgs is blooming brilliant. After listening to “KLF” and “20th Century” I was looking forward to listening to this book and it did not disappoint, loved the references to the other two books.
Loads of fascinating stories all the way along Watling Street.

I thought this would be written by a historian and be about Watling Street, rather than the autobiography of a tedious Scouse drug abuser. This book is so horrifically liberal and remoaner biased it's painful to listen to. I wish I could at least reclaim the money I wasted on it, if not claim compensation for the time I wasted listening to it.

The book is one-third Watling Street, and two-thirds a Jingo-Marxist pseudo-spiritualist rant. The 'history' part is vague and, at best, not very well-informed; Higgs's favourite sources are of 'my socialist mate from down t'pub' variety. The rest is like an oversized opinion piece which has a lot to do with Higgs's own view on the privatisation of the Royal Mail, and next to nothing with English history. Returning it after 4 hours in; a waste of time!

Author drifts off to random personal stories that I had no interest in. I was hoping to be transported back to the events that occurred not listen to him chatting about himself.

Only managed 4 chapters. Really long winded and mostly political for some reason. Generally dull and pointless. I was losing the will to live!

Thoroughly enjoyable apart from a couple of things that pulled me straight out, but otherwise an interesting take on history, language, and the A5.

The thing that really grated though is this; The Finnish word is not SUSI, it's SISU ffs.

This was the 3rd audio in this genre that I have listened to and the worst. There was some very interesting things that I learned but there were a number of times I just get fed up with listening. The author just started rambling on and going off on tangents. At times I got so fed upon just skipped to the next chapter.