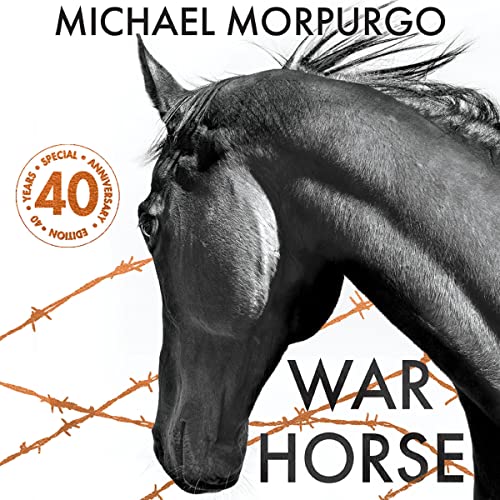 By: Michael Morpurgo
Narrated by: Luke Treadaway
Try for £0.00

Before the Steven Spielberg film, before the National Theatre production, there was the classic children’s novel…

In the deadly chaos of the First World War, one horse witnesses the reality of battle from both sides of the trenches. Bombarded by artillery, with bullets knocking riders from his back, Joey tells a powerful story of the truest friendships surviving in terrible times.

One horse has the seen the best and the worst of humanity. The power of war and the beauty of peace. This is his story.

War Horse was adapted by Steven Spielberg as a major motion picture with Jeremy Irvine, Emily Watson, and Benedict Cumberbatch. The National Theatre production opened in 2007 and has enjoyed successful runs in the West End and on Broadway.

Wonderful narration of a great story

I've loved War Horse since I started reading it to my 6th graders a dozen years ago. I found images to help me explain all the things kids no longer know about horses. I used a photo of my dad riding a cavalry green-broke mustang at Fort Riley, and I brought in my dad's old riding crop. They understood and they chose favorite characters. I tried to read with accents, but alas, that is not my talent. If I'd had this narration, the story would have come alive for them. For those who saw the movie, they chose the book as the better story. The narration is truly remarkable. For the 40th anniversary version, Michael Morpurgo's story became even more alive as the narrator read his introduction. I highly recommend this version. I plan to listen to it again.