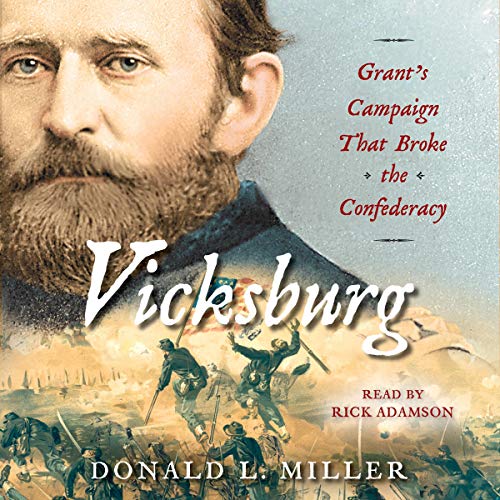 By: Donald L. Miller
Narrated by: Rick Adamson
Try for £0.00

"A superb account" (The Wall Street Journal) of the longest and most decisive military campaign of the Civil War in Vicksburg, Mississippi, which opened the Mississippi River, split the Confederacy, freed tens of thousands of slaves, and made Ulysses S. Grant the most important general of the war.

Vicksburg, Mississippi, was the last stronghold of the Confederacy on the Mississippi River. It prevented the Union from using the river for shipping between the Union-controlled Midwest and New Orleans and the Gulf of Mexico. The Union navy tried to take Vicksburg, which sat on a high bluff overlooking the river, but couldn't do it. It took Grant's army and Admiral David Porter's navy to successfully invade Mississippi and lay siege to Vicksburg, forcing the city to surrender.

In this "elegant...enlightening...well-researched and well-told" (Publishers Weekly) work, Donald L. Miller tells the full story of this year-long campaign to win the city "with probing intelligence and irresistible passion" (Booklist). He brings to life all the drama, characters, and significance of Vicksburg, a historic moment that rivals any war story in history. In the course of the campaign, tens of thousands of slaves fled to the Union lines, where more than 20,000 became soldiers, while others seized the plantations they had been forced to work on, destroying the economy of a large part of Mississippi and creating a social revolution. With Vicksburg "Miller has produced a model work that ties together military and social history" (Civil War Times).

Vicksburg solidified Grant's reputation as the Union’s most capable general. Today no general would ever be permitted to fail as often as Grant did, but ultimately he succeeded in what he himself called the most important battle of the war - the one that all but sealed the fate of the Confederacy.

What listeners say about Vicksburg

By far the most thorough analysis of the long and bloody approach to the taking of Vicksburg. A riveting narrative, with explanations of military and period-cultural terms and elements to allow lay readers a full understanding. The narration, like the writing and scholarship, is superb. A bravura performance all-round!

I disagree with the reviewer who thought there should have been more focus on the last few months before the surrender. The book recounts the entire campaign, putting in context the problems Grant faced and his various attempts (successful and unsuccessful) to solve them. The only flaw is that the author devotes a bit too much attention to the conflicting evidence about Grant’s drinking.

Be sure to download the PDF! It has a collection of excellent maps for the successive stages of the campaign. The maps are a great help in understanding how each part of the story fits into the overall picture.

In line with recent trends in academia this book is intended to put down the South. The biases run throughout the work. The author’s conclusions are predictable. It is written from a Yankee and Grant perspective. That might appeal to some readers of that persuasion and to Confederate bashers. On the positive side the Vicksburg campaign is an interesting and crucial segment of the Civil War taking up much of 1862-1863. The author rehashes the background too often as if the reader was suffering from short term memory loss. That was tiring, but other than that the work flows well. The performer’s tone and inflection seemed to put emphasis on Southern misdeeds and Yankee heroism. At least he didn’t put me to sleep. I did not see a need for this book. There’s already a number of good works on the fall of Vicksburg. I recommend works by Terry Winschel, Tim Smith and Ed Bearss.

Most of the book was about June 1862 - April 1863 pre-Vicksburg final campaign. Would have been much stronger if it focused post-Champion's Bend.

If there is one audiobook to listen to leading up to July 4th, this is it! outstanding!!

The battle for Vicksburg was a long slog, for both sides, and the present work reflects that. Unfortunately, as a reader seeking to be both informed and entertained, I find the book perhaps overly informative and, as a result, a grinding read.
This is a book about war and the author recounts, in considerable detail, the gore, disease, and misery of this front in the struggle. I totally respect his desire to present the true face of war and not to dress things up. But it can sometimes make for grim reading.
This is a book for the comited Civil War buff and for historians. For the ordinary guy or gal looking for a good read it is a long slog.

A great book for history and Civil War fans. It is very capably written and performed. The book gives listeners a solid defense of the strategic importance of the Vicksburg campaign in the outcome of the war. Educational and fun.

the ending is the best part

I didn't enjoy this book as much as I wanted to. the author seems to bear some animus against General Grant, and credits every ridiculous rumor about him as if it were gospel truth. He often says that Grant's successes were due to others, but he setbacks were entirely his own. It isn't until the last chapter of the book that a true picture of General Grant's accomplishments is painted. There is much information here if you can straighten the slant.

The author presents a well balanced history. He shows Grant in a realistic light rather than either making him more of a hero than he was or demonizing him as a butcher. I enjoyed the notations of his own research of source material.

A story well worth hearing

Absolutely fascinating and well-balanced. The author gives wide-ranging and thoughtful context, as well as the play-by-play of the Vicksburg campaign, while the reader's performance was more than competent.