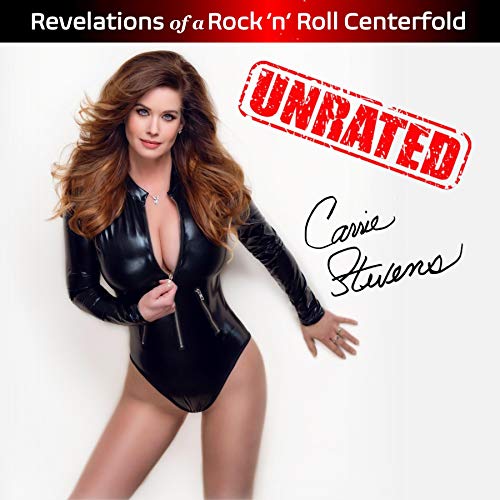 They were just a couple of tweets, but they propelled actress and Playboy playmate Carrie Stevens into the headlines, as stories swirled about sexual harassment in the movie industry and President Trump’s alleged affairs.

Besieged by the media, Carrie was shocked and astounded at the frenzy these tweets aroused. It convinced her that she needed to write her memoir. Her attitude: If they think these stories are sensational, just wait until they hear about all of her life’s adventures. The result is Unrated: Revelations of a Rock ‘n’ Roll Centerfold, the memoir of an unimaginable evolution from small-town girl, to an extraordinary life in the fast lane. A life in which she had intimate encounters with marquee celebrities from all walks of life - rock stars, Oscar-winning actors, movie stars, royalty, a future president, sports legends, and billionaires.

It’s a life she shared with the privileged and the powerful that took her from Kiss' tour bus to the Playboy Mansion, hopping on private jets at a moment’s notice and cruising the Mediterranean on mega yachts, and even six months as a “guest” in the exotic harem of the prince of Brunei. Carrie candidly admits that she chose to become a sex object because she couldn’t escape being treated like one. She takes you on an unapologetic, whirlwind adventure of debauchery, dysfunction, and heartache with humor and wisdom.

Carrie reflects on the tornado of emotional torture she’s endured and the choices she has made, including life as a single mother. Her story is more than that of survival. It’s about soulmates. In her quest for what matters most in life, (and 29 after his passing) Carrie can’t let go of her love for her late boyfriend Eric Carr, drummer for the rock band Kiss. Yet, through the years, she has found a way to embrace the loss and use it as her guiding light. Eric will always be the heart and soul of her story.

What listeners say about Unrated

This is a great book, and my first memoirs read. Carrie shows and tells you the turmoils and ups and downs throughout her life.
Also the devotion and can do will do attitude she has.
The book is inspirational and shows you how determined Carrie is to work hard and strive succeed throughout her life.
Thank you Carrie, keep and stay safe.

Absolutely loved it. From start to finish a sincere & honest book. Highly recommended

Every trite title, of every chapter says "Don't ____" , but then Carrie proceeds to glorify what she is claiming "NOT" to do. I think I rolled my eyes a thousand times during this book. I couldn't return it, so I listened. I thought it might be like Holly Madison's book. Carrie glorified prostitution within a harem in the Middle East. Which is EXTREMELY dangerous! She bemoaned one woman's account of having been sex trafficked. Again, victim-blaming, and judging another woman's experience. She portrayed as a "Victim" constantly, all while never having had an abusive childhood, having made all of her own poor decisions, giving up on opportunities that others would have loved to have.. going against her parent's wise advice, yet blaming everyone else. She complained about not making "Playmate of the Year," but instead of taking responsibility for being a prostitute, she AGAIN blamed other women. She cheated with married men, then played "victim." She wasn't going after "excitement," she was attracted to toxicity, because she herself, was toxic. "Like attracts like," "Water Seeks It's Own Level." She was jealous and judged other women in the industry. She complained about being only respected for her "looks," yet went after men for money. Very hypocritical. I get that everyone has a journey of growth to go on, but her accounts were not humble, or reflective. They were defensive and Narcissistic. The worst was when she Victim-blamed and verbally attacked Rose McGowan and Holly Madison for speaking THEIR truth and speaking from THEIR personal experiences. I didn't agree with Carrie until the end, when she said, (at the age of 50), she had been projecting onto others and using her own perceptions. Her son parentified her, per her book when sharing her relationships and issues, with her life with him. Using her son for counsel. I'm glad that she found self-love. I'm still scratching my head over how this woman is "famous."

I highly recommend this book written by the gifted, beautiful, and talented model/actress/entrepreneur - Carrie Stevens.

She speaks honestly about all things rock n roll and being a popular Playboy Playmate and all that comes with such fame.

What makes this book so good is that it is both entertaining and heartwarming. It's real, raw, honest and you will not be able to put it down for a second. I loved it so much I bought the hardcover, paperback, and was going to buy this audiobook, until the wonderful author Carrie Stevens, gave me a complimentary copy.

This is a true 5 STAR audiobook and you will not regret purchasing this excellent memoir!

I loved this unabashed auto-biotragedy. The events of her memoir is well-conveyed through raw, riveting, narration.

UNRATED takes you on Carrie’s journey of her life (so far!) from Smalltown USA to Hollywood to the palaces of Brunei to the pubs of Ireland. Carrie tells her story in an unbelievably HONEST, raw and emotional manner. And, as the title of the book states, there are certainly Revelations - funny, sad, introspective and revealing...they’re all here. Stories of love and heartbreak and life lessons learned. Don’t judge a book by it's cover, both literally and figuratively.

A must for Eric Carr fans, but more importantly, it’s a story for ALL AUDIENCES. Congratulations, Carrie!

They say a picture is worth a 1,000 words. In this case, the words written by Ms. Stevens are priceless. Both men and women who judged this book by the cover are in for a pleasant surprise. Carrie takes you on a trip down memory lane that is packed with passion, adventure and self discovery. You will feel as if you are on that journey with her through some of the best and worst times of her life as she seamlessly weaves the life lesson she learned into each compelling chapter.

From the rebelliously ambitious young girl following her dreams, through the joys of love, heartbreak of loss and many outrageously wild and mischievous adventures along the way.....Carrie speaks her truth with humor, sincerity and authenticity. You not only get to hear, but also feel each raw emotion with her. I found myself tearing up and laughing along with her. I really enjoyed the introspective moments throughout the book. The questions we ask ourselves about who we are, why we did or did not do something and all the What If's, Why Not's and WTF's are we gonna do next?? She says them out loud and it feels like we are discovering those answers for ourselves right along with her.

In this book, Carrie reveals far more of herself in words than she ever did on the pages of PlayBoy.

I highly recommend Revelations of a Rock N Roll Centerfold to all, but especially to women who may have judged the book cover negatively.

I had never heard of Carrie Stevens before reading this book. However, I found this book fun and interesting. I would recommend it.

She sure does love herself

If I had to hear one more time, how many guys loved her, left their wives for her, stopped her to tell her how beautiful she is...omg...I think I would go crazy.
She thinks alot of herself. Every story is about how good looking she is. How she is singled out of a crowd, how Playboy just had to have her, how everyone's jaws drop because she is so great. How poor little her only had her looks and all these rich guys....boo hoo.
A little humility goes a long way. She really needs to learn that I think.

The author’s story will make you laugh, cry, and gasp. Carrie Stevens adeptly takes you into her world, her mind, and her heart, like no other author I have read.

I empathized as a kindred spirit with her long-term grief and the honoring of her beloved. It does all come down to self-acceptance and not allowing the judgment of others to dull your sparkle.

Ultimately, this is a story about a brave, passionate, American female’s journey of personal growth.

I am grateful the author narrated the book herself. She did an amazing job of being very real with all of her emotions and I admire her for her honesty. It was so good, I will probably listen to it again.

This was a recommended book, so my expectations were low. The book was fun to listen to and very real. And Ms. Stevens delivery is very enjoyable. Full of movie stars, rock stars and sports legends, this is an excitable ride.

Thank you so much for sharing your life. I was blown away with your story and by the end I felt so inspired.