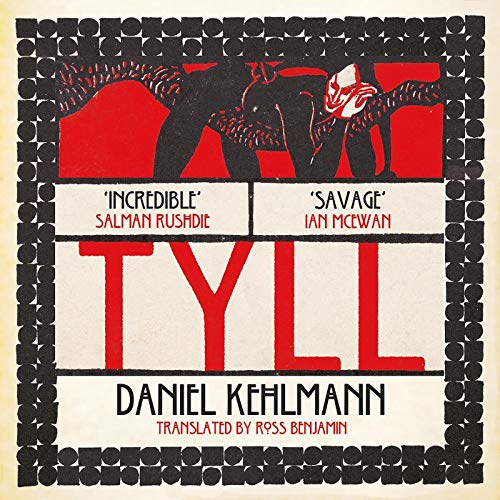 Shortlisted for the International Booker Prize 2020

He's a trickster, a player, a jester. His handshake's like a pact with the devil, his smile like a crack in the clouds; he's watching you now and he's gone when you turn. Tyll Ulenspiegel is here!

In a village like every other village in Germany, a scrawny boy balances on a rope between two trees. He's practising. He practises by the mill, by the blacksmiths; he practises in the forest at night, where the Cold Woman whispers and goblins roam. When he comes out, he will never be the same.

Tyll will escape the ordinary villages. In the mines he will defy death. On the battlefield he will run faster than cannonballs. In the courts he will trick the heads of state. As a travelling entertainer, his journey will take him across the land and into the heart of a never-ending war. A prince's doomed acceptance of the Bohemian throne has European armies lurching brutally for dominion and now the Winter King casts a sunless pall. Between the quests of fat counts, witch-hunters and scheming queens, Tyll dances his mocking fugue; exposing the folly of kings and the wisdom of fools.

With macabre humour and moving humanity, Daniel Kehlmann lifts this legend from medieval German folklore and enters him on the stage of the Thirty Years' War. When citizens become the playthings of politics and puppetry, Tyll, in his demonic grace and his thirst for freedom, is the very spirit of rebellion - a cork in water, a laugh in the dark, a hero for all time.

What listeners say about Tyll

What an amazing read. I'm not sure I fully understood everything that was in there. I feel like I want to go back and listen to everything again - carefully!

Set against the 30 years war in Europe. (I'd never heard of it, but apparently it was devastating and ran from 1618 - 1648.) The plot follows some of the key protagonists of the war, and the famous Tyll Eulenspiegel who keeps popping up at different points over the 30 years in different guises. He's an entertainer, circus performer, juggler, court jester etc. He has decided not to die, just moves on as required.

It felt like a deep and meaningful plot (partly because I didn't 100% follow everything!) It jumps between time periods during the war, and after each jump the reader spends some time trying to catch up with what has happened. Many, many names get thrown at the reader - most of them are immediately killed or never mentioned again. It really does feel like you are in the 17th Century, with superstitions, curses, spells etc. as well as the 17th Century politics.

Fantastic performance by Jonathan Keeble, He fully understood the work and seemed to relish every word he was reading. Amazing range of voices that he managed. His donkey voice especially.

The story was good, if a bit brutal. But I REALLY struggled with the narrator when doing accents. The (non word) oral and nasal sounds, grunts and whistling exhalations that littered the performance were excruciating to listen to...

Listen to this book - you won't regret it!

I loved this book - fantastic story wonderfully narrated. The story is engaging immediately and with excellent imagery. The narrator was superb - all of the voices, all of the expression....I didn't want it to end. Highly recommended!

A fictional introduction to an interesting period

A very accomplished narration of a curious book. This fictional introduction to the 30 years war made me want to discover more about this period. It is written in such a way that you feel a Brechtian distance from the characters- understanding their feelings and positions without real emotional engagement. The episodic nature of the writing helped to accentuate this. The ending felt abrupt .

A story you will remember

Novels set in the time of the 30 years war are few and far between and this book manages to capture the arrogance, folly and horror of that time. This story will stay with me for quite some time to come. The narrator did an excellent job.

The only certainty in this wild & exciting story was that Tyll would emerge repeatedly. Otherwise is was impossible to predict and for that it was a joy to listen to. It is gruesome, sad, funny, intriguing and timeless. Enjoy.

I thoroughly enjoyed listening to Tyll. It captured the period vividly, and carried you along engrossed at every turn. The descriptions of events were clear but never lurid, not dwelling on the cruelty of the time, but not flinching from sufficient detail so as to paint a clear picture. I found Jonathan Keeble's reading added colour to the words, and helped the story to move along freely. Daniel Kehlmann is a very talented writer and this book will surely go down as a classic.

Enthralling feat of imagination. Convincing and credibly incredible. But was it written by the donkey?