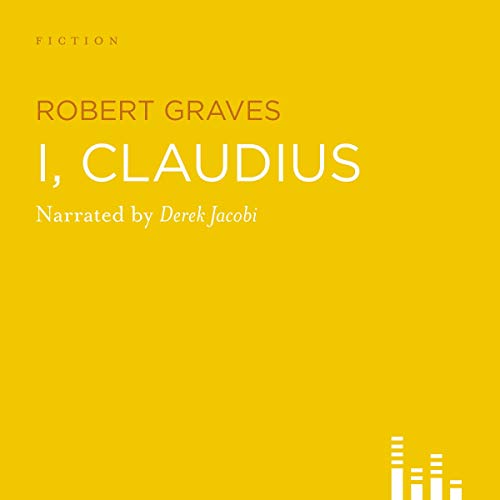 By: Robert Graves
Narrated by: Derek Jacobi
Try for £0.00

Here is a major new recording and the riveting account of Ancient Rome in all its madness and debauchery.

The politics of empire-building and the hypocrisies, back-stabbings, and corruptions of Rome's first family come to light. First published in 1934, the book retains a marvelously modern and often comic tone, and is written in the form of Claudius' autobiography. This is gripping stuff, read by one of our finest actors, who also starred as Claudius in the classic television series.

What listeners say about I, Claudius

I have listened to the BBC Radio dramatisation (both books in one) which is excellent but just too short as an audiobook, and I wanted to fill in the gaps, which this recording and its predecessor has done to some extent. I first read the print books in the mid 60s - can't believe it's that long - and they certainly made Roman history more exciting and even helped add a few marks to O Grade Latin. Latin was compulsory for university back then! I don't do much re-reading of print except for study these days, but find audiobooks allow me to revisit old favourites while doing something else. And for that I want the WHOLE THING! Also some edits don't consider that next in series might be mysterious without the rejected bits in previous book.
Derek Jacobi became eternally associated with the Julio-Claudians after the BBC TV series, so he's the expected voice of Claudius, though it was fine for him to be Augustus on the Radio 4 version.

This has been abridged in much the same way Caligula abridged Gemellus. Surely this story deserves better. Read the book … watch the TV show. Jacobi is as remarkable as ever, but this is a total waste of money.

If you could sum up I, Claudius in three words, what would they be?

What other book might you compare I, Claudius to, and why?

What comparison can one make? Except to say that despite having been written 70-80 years before, I Caudius (and Claudius the God) reads as easily as any novel by the excellent Mr Robert Harris, or John Grisham or Val McDermid.

I frankly enjoyed the whole book - it's like a symphony or a concerto, one has to listen to it all, and both books at that.

A short paragraph about Calpurnia was touching - in Claudius the God.

Based on the histories of Suetonius and Tacitus, Robert Graves has given the world two great novels covering the era of first Emperors of Rome.
Although the books are very good reads off the written page, in Audio, Derek Jacobi further breaths a rich vitality to the tale, his voice conveying young and old, women and men with equal east and no artifice.
The only two reproaches, this was an abridged version (which I knew, but wanted the Jacobi narration) and I would have preferred the whole text. Secondly, the Vivaldi interludes were not appropriate in my opinion. A trumpet fanfare as in the excellent and seminal BBC TV dramatisation would have been super.

I initially got this as I'm interested in Roman history and also the fact that the narrator was Derek Jacobi. I knew it would get a bit complicated but that was an understatement. Part of my disappointment was the fact that it went in to too much detail about things that weren't directly to do with Claudius, such as the military sections. Whilst there is a bed for family background, there wasn't much about him. Also, for some unknown and very annoying reason, someone felt the need to stick vivaldi in between what assume were chapters. If you must separate them, at least use something more appropriate. Had to return in the end.

So, first. There’s one slight editing glitch about mid way through. But otherwise this is an amazing book that really stands the test of time. There is no family saga like this one. Bloody, twisted, full of wonderfully dark characters. And all of them are real. Everything that happens in this book is a matter of historical record. Possibly slightly sensationalised for fiction, but in general it’s all recorded in the ancient sources.
Derek Jacobi is brilliant. You wouldn’t expect anything else really. I’m old enough to have watched the BBC adaptation of this, and the sequel. Made in 1976. Derek Jacobi played Claudius in that too. If you can find a copy, do yourself a favour and watch it. It’s mesmerising.

I watched the series and read the book. This audio book is the perfect combination.
Who other than Derek Jacobi can make Claudius come to life like this?
He was a great companion during many walks.

How many people and how many names?

At first I found it quite difficult to listen to an account that is so matter of fact about violence and the abuse of power, but I guess it is trying to offer context through the narrative. After a while I found it to be quite refreshing in terms of not having to feel discomfort in listing to others pain, and that provided a point of critical reflection. There are many characters and names to remember, often similar, and it can be difficult to keep up, and as it is an audio book it can sometimes be onerous trying to move backwards and forwards if you want to recap on something you heard earlier.

Somewhat unsatisfactory - but not dreadful!

I came to this recording with high expectations. Derek Jacobi - I Claudius - sounds good! Jacobi narrates well, conveying Claudius' stutter exceptionally well at the appropriate moment. The main problem I had was keeping track of all the characters! I found that - as a story to listen to whilst driving - my mind wandered too easily, and when I came back to it, I couldn't work out who was related to whom and what connection they had to the overall story. This got better the longer I listened, and there are some useful recaps during the unfolding of the tale: but nevertheless, I was left feeling rather disappointed. Having just listened to Robert Harris' 'Lustrum' - also a tale set in Rome amidst cruetly and duplicity - I felt this suffered by comparison. But not a total write off! Perhaps worth a relisten at some future date.

The gipping, evocative, amusing original novel has been pruned to the bare minimum. On the plus side, it's a good alternative to sleeping-pills

Abridged but still a pleasure

I would have preferred the whole thing and length be damned but having Derek Jacobi read these is just so good.

If you watched the series, Derek Jacobi plays Claudius...and he was excellent. On the audio, he brings all his vim and vigor and talent to the reading, making the story come alive.

Jacobi does a great job with the narration - brings Claudius to life. The abridged version moves through the plot efficiently and keeps the story in tact

It was great hearing Derek Jacobi reprise his Claudius, almost as if you were having dinner with the old stammerer himself. It reminds one of the BBC series but stands on its own. I only wish it were not abridged! Onward to "Claudius the God," which completes the saga. You can get the unabridged version, but it won't be with the incomparable Sir Jacobi.

I read the book when I was a teenager and loved every word. When I bought the Audible version I was a little anxious that Derek Jacobi wouldn't "match" the voices I'd heard in my head all those years ago. My fears were ungrounded: Jacobi is brilliant and I'm enjoying every minute. The shenanigans of ancient Rome make today's politicians seem tame, and Robert Graves was a writer to relish. Highly recommended.

Where does I, Claudius rank among all the audiobooks you’ve listened to so far?

This is my favorite audiobook. The absolute top. (Maybe for the moment?)

The plot was fantastic, especially because though it's spanning many years, everything is presented so realistically, without any alienating terminology or cheap narrative effects.

All scenes have their own taste.

Extreme in the sense that I've been captured by it every single time. Either you "know" the story or not, it remains fresh however often I listen to it.

A perfect example of a perfect story, read by a master actor.

The book covers the lurid, fascinating story of Claudius, accidental emporer of Rome in the Imperial age. Lively story, with a decent base in history (although he does demonize Livia). The narration by Derek Jacobi really brings it to life, as he played Claudius in the television series (BBC I think).

Excellent except one thing

The music was unnecessary, Ill-chosen and rather annoying at times. Derek Jacobi is so pleasant and great to listen to, but the strange title music felt out of place and added nothing to the performance. It should be changed to music that fits with the period, is soft and minimalist. I don’t know why this strange uptempo string music was chosen… aside from that it’s a great book read by the best possible actor, the great Derek Jacobi who played Claudius himself.

I had heard this involved palace intrigue and sex. I was not going into this story with high expectations of human behavior. But it was so much worse - poisonings, slow death by starvation, child rape ... it was just too much for me. The unlikely fool survives to win in the end - a compelling trope, but not enough to make it worth the appalling and revolting stuff. The genealogies were confusing and in written form it might be easier to follow them, but in audio book form it was impossible. Some of the crimes described are so awful I wished to un-hear them. I could not have finished had it not been relatively short. Jacobi earned his praise for the portrayal. But he has better material elsewhere. I, Claudius left me feeling sad for human nature. I really was sorry I gave it my time.

Derek Jacobi elevates everything he reads

I was surprised the there were differences between the book and the classic mini-series. I think I prefer hearing Derek Jacobi's narration even more than the dramatization.