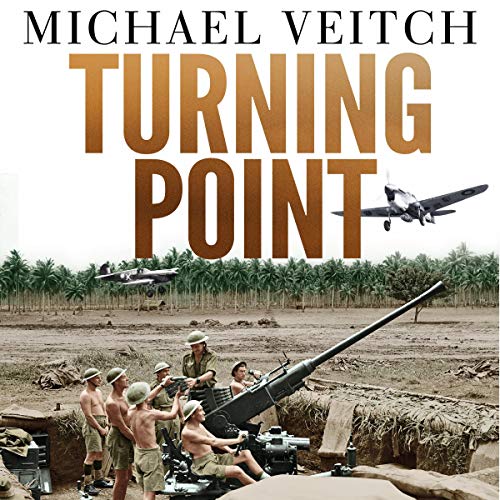 September 1942 marked the high point of Axis conquest in World War II. In the Pacific, Japan's soldiers had seemed unstoppable. However, the tide was about to turn.

On Sunday, 6 September 1942, Japanese land forces suffered their first conclusive defeat at the hands of the Allies. At Milne Bay in Papua New Guinea, a predominantly Australian force - including 75 Squadron (fresh from their action in 44 Days) - fought for two weeks to successfully defend a vital airstrip against a determined Japanese invasion. The victorious Australian army units were crucially supported by two locally based squadrons of RAAF Kittyhawks.

The Battle for Milne Bay and victory for the Allies was a significant turning point in the Pacific War, but while it received worldwide publicity at the time, it has since been largely forgotten. It deserves to be remembered.

Michael Veitch, actor, presenter and critically acclaimed author, brings to life the incredible exploits and tragic sacrifices of these Australian heroes in another fast-paced and thrilling tale.

What listeners say about Turning Point

Well-written and read story of the type of battle that would have been better known if Australian and Allied politics had been in favour of the Australian army.
A lot of very brave, 'ordinary blokes' fought and died at Milne Bay. Just pleased that someone did the story justice.

a battle outside of Australia nobody was ever taug

the victor usually writes the history except in the case of Japan. and as an American we're never told about victories of other countries even Lennon graph we're taught was barely a victory. this is why learning history is so important so that we never repeat it. knowing the crimes and mistakes of your country for that reason

The Battle of Milne Bay is completely overlooked in WWII history. And it's rarely even mentioned as the first Japanese land defeat largely because it is completely dwarfed by Guadalcanal. And lest we forget, it was the RAAF that saved the day here. All credit goes to the bravest of brave Australian warriors. The Allies were prepared for the Japanese onslaught, which secured the victory. However the losses were absolutely devastating. But as with so many of these stories, the untold men battled through malaria, the oppressing weather, and countless other atrocities. And they never grumbled or wavered in their duty. Oh to have these men today. Thank you Michael Veitch for writing this book about this little known battle and win for the RAAF and the Allies in the Pacific.

Michael Veitch is a wonderful narrator. Again, this is one of the rare times where an author is as good of a narrator as a writer. That's not very common. Wonderful all the way around.