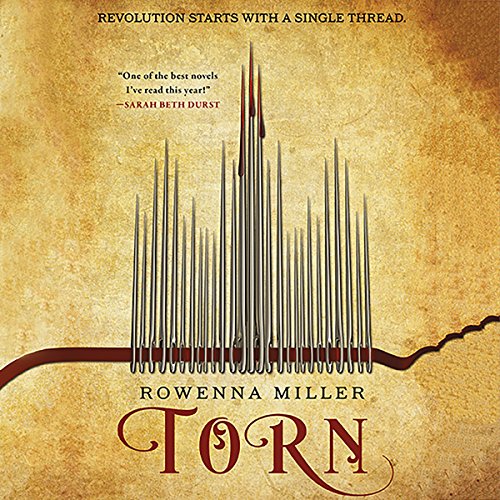 By: Rowenna Miller
Narrated by: Moira Quirk
Try for £0.00

Torn is the first book in an enchanting debut fantasy series featuring a seamstress who stitches magic into clothing, and the mounting political uprising that forces her to choose between her family and her ambitions, for fans of The Queen of the Tearling.

In a time of revolution, everyone must take a side.

Sophie, a dressmaker and charm caster, has lifted her family out of poverty with a hard-won reputation for beautiful ball gowns and discreetly embroidered spells. A commission from the royal family could secure her future - and thrust her into a dangerous new world.

Revolution is brewing. As Sophie's brother, Kristos, rises to prominence in the growing anti-monarchist movement, it is only a matter of time before their fortunes collide.

When the unrest erupts into violence, she and Kristos are drawn into a deadly magical plot. Sophie is torn - between her family and her future.

"Torn challenges readers to thoughtfully consider all sides of social change by humanizing each perspective. Readers interested in classic fantasy, feminism, adventure, and a bit of romance will enjoy this thought-provoking book." (Booklist)

What listeners say about Torn

absolutely loved this. came for the magical seamstress stayed for the people's uprising and there's a romantic plot too. fantastic narrator

This one gained my attention back when it first came out because it involves a magic system that involves sewing. I got the audiobook with the entire idea that I would do some cross stitching while listening to it, but it didn’t end up working out like that. Oh well! :D

This is the story of Sophie, who is a seamstress in the city of Galitha. Her and her brother Kristos are common folk in the city ruled by the noble class. Their parents both died some years earlier, and were originally from the country of Pellia, where charms and curses and other such superstitions and magical abilities are still fairly commonplace. Sophie learned from her mother how to cast charms, and now makes a decent living running her shop and discreetly selling charmed clothing to the nobles.

Kristos on the other hand, is part of a radical group of common folk who have become more vocal as tensions between the noble class and working classes have increased. The common class wants more equality and a say in lawmaking and whatnot, and the nobility is… well, the nobility. Kristos is quite involved with these rebels, right up until they take him hostage in order to force Sophie to use her ever increasing friendships with some of the nobles in the city to make a cursed bit of clothing for someone in the royal family.

So, Sophie finds herself in between doing as she must to see her brother safe again, and an increasingly serious relationship with one of the most noble of dukes in the city.

I thought this book was fantastically written, with lovely prose, and brought so much well described tension to the table at times that I had to take breaks because the tension and the emotion that this book threw at me was getting me all riled up. That’s a sign of good writing! I will admit that when I went in, I was not expecting this book to have a real good fist fight with my feels, but it certainly did. I liked Sophie as a character, and I really wanted her to succeed against the antagonists. The revolt that plays out over the course of the story was very well plotted out and unfolded in a way that I felt was believable and totally could have happened in real life. The magic system was really neat, and while the magic wasn’t really the driving force of the story, it definitely added a level of mystique to the whole thing. I enjoyed the romance that played out in this one as well.

It had absolutely wonderful narration as well from Moira Quirk, who made all the characters sound suitably different and gave even male characters, like Kristos and Theodor really great voices. I sometimes have a hard time with female narrators, but her voice is very pleasant to listen to, and this book, when I had time and inclination to listen, seemed to just fly right on by.

All told, it was a great use of 14 or so hours of your time, if you like books with an interesting and old-world feeling magic system, with sewing, and a well written and believable proletariat revolt, and a bit of romance all in one package.

It started off going pretty fast and enjoyable. And about mid way through I was thinking to myself “I really want to like this book.” I loved the protagonist and even the characters surrounding her and the issues that she was dealing with but it just seemed like there was some dead space in between. A little repetitious at times. But I did find the story interesting and I wanted to know more so I finished the book and looking forward to the next one. I recommend it to anyone who has the patience and just enjoys listening to a good story. I would not call it a page turner but certainly you will be rooting for the main character.

Loved the world setup and characters! Really brought down by weak antagonist, lack of ambition in engaging the themes of its plot... Still enjoyable and I will check out the second book to see what happens.

I’ve become a fan of Moria Quirk, and she does not disappoint in this gripping political story. With a heavy dose of romance, and nod to current frustrations with disparity, this book made me feel that I was in another world.

Narrator was excellent, but the story was unbelievable, protagonist was almost stupid and gullible. The premise sounded interesting, and the first couple chapters on how the main character worked. Her charms as a seamstress were interesting but it quickly fell short. You could almost see how the story would go as unbelievable as it was the main character commits treason and then goes about her job as if that’s that, the deed is done and behind her and now her life would go on just as before. The main characters in the book were just unlikable either because they were so naïve and stupid instead of logically thinking adults. The brother was irritating from chapter 1. So many plot holes, and expecting the reader or listener to gloss over them was just too much.

Really my title says it all made it through 4-5 hrs of the book which was mostly world building at the expense of characters and plot... the reader is told the main character and her brother are smart yet they never do anything to prove it. And the intrigue is just meh. Some people might enjoy this book but unfortunately I'm not one of them

loved this book! I can not wait for the next one in the series!