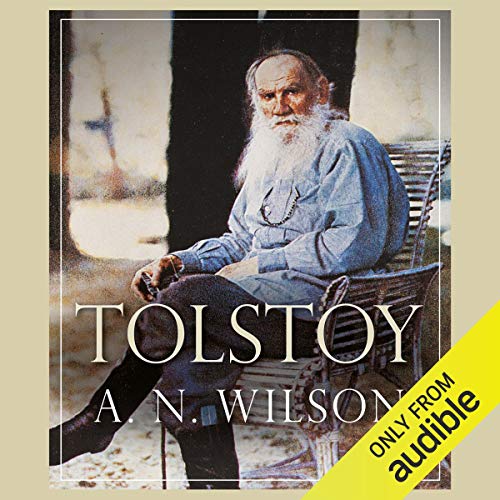 In this biography of Count Lev Nikolaevich Tolstoy, A. N. Wilson narrates the complex drama of the writer's life: his childhood of aristocratic privilege but emotional deprivation, his discovery of his literary genius after aimless years of gambling and womanizing, and his increasingly disastrous marriage.

Wilson sweeps away the long-held belief that Tolstoy's works were the exact mirror of his life and instead traces the roots of Tolstoy's art to his relationship with God, with women, and with Russia.

He also re-creates the world that shaped the great novelist's life and art - the turmoil of ideas and politics in 19th-century Russia and the literary renaissance that made Tolstoy's work possible.

What listeners say about Tolstoy

This biography is a towering achievement setting out Tolstoy’s life in intimate detail. I’ve just read War and Peace and was intrigued by the biographer’s illustrations of how Tolstoy grafted aspects of the personalities and experiences of his family, including himself, onto his characters. Tolstoy the man was full of contradictions who lurched to extremes in his behaviour as well as in his political and religious beliefs.

He was no doubt a genius who wrote some of the greatest books in European literature but he was a monster in his treatment of his long-suffering wife, Sophia. Even by the standards of his day he was an extreme chauvinist who regarded child-bearing as women’s only real purpose. He didn’t acknowledge the vital part that his wife played in laboriously writing out the numerous drafts of his books and without whom they would probably never have reached publication. His creative drive sadly got buried by his obsession in later life with theology to which he devoted much of his writings. As a consequence the later part of the book has a lot of religious content that I found less riveting than the rest of the book, but that’s more due to my disinterest in the subject.

Turbulent times in Russian history add a backdrop to a fascinating and mainly productive life told with scholarship and verve. I enjoyed listening even if I ended up disliking the man but still loving his books.

The narrator is very good aided by the lively style of writing.

This is a great book. I read it when it first came out, and the revisions and updatings seem most apparent in its first chapter, but this is not a problem. Wilson is fair-handed and wise about Tolstoy's marriage and religion - stumbling blocks to sympathy. A massive and world-sized character, Tolstoy fascinates and Wilson is unabashed and makes him human-sized. while not minimising his work or impact. A definition of a good read.

One of the great literary biographies, beautifully read.

This is a superb reading of a great biography. The drama of Tolstoy's last years is made as compelling as his fictional writing by Wilson and the reading sparkles with subdued passion and intelligent phrasing.

life and times of Tolstoy

It seems to me Mr. Wilson spends most of the time critisising Leo Tolstoy rather that writing about him. It appears he feels that he is able to tell what Tolstoy thinks and how he feels. Tolstoy was an extremely spiritual man and I very much doubt that Mr. Wilson was able to understand grasp
what that means. I don't quite know why he wrote this book, he doesn't appear to understand his subject, but probably doesn't realise that. Mrs. B Evenden

Of its time, but revealing and powerful

If Tolstoy is a vast and unknown country, then Wilson's great biography, written at a time when the Red Tsars of the Soviet Union were still in power, is the magnificent Mappa Mundi, embracing the breath of Tolstoy's mind and imagination, his very human failings and banalities, and drawing the reader deeply into the work - the key aim of a biography. It has formed an essential part of my daily journey for many weeks.

A biographer who grows more and more scornful of his subject