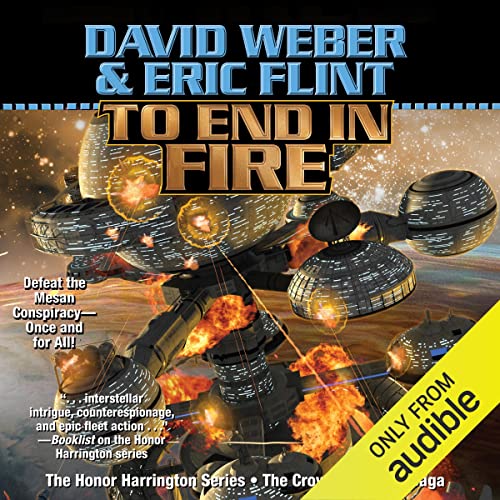 To End in Fire

By: David Weber,Eric Flint
Narrated by: Peter Larkin
Try for £0.00

The Solarian League lies in defeat, crushed by the Grand Alliance of Manticore, Haven, and Grayson.

Obedient to the Alliance's surrender demands, the League is writing a new Constitution, to prevent the reemergence of out-of-control bureaucrats, like the "Mandarins" who led it to disaster. Frontier Security has been disbanded, the outer worlds have regained control of their own economic destinies, and multiple star systems will soon secede from the League entirely.

Yet the League is—and will remain—the largest, most economically powerful human star nation in existence, and despite the overwhelming evidence that their unelected political leaders were the driving force behind the war, many League citizens deeply resent the fashion in which their star nation—the Solarian League—has been humbled. And those who most resent the Grand Alliance continue to blame Manticore for the nuclear bombardment of the planet Mesa after its surrender. They refuse to accept that the League—and the members of the Grand Alliance—could have been manipulated by a deeply hidden interstellar conspiracy called the Mesan Alignment. The Alignment is only an invention of the Grand Alliance, no more than a mask, a cover, for its own horrific Eridani Violations.

Not all Solarians feel that way, but even some of those who accept that there was an interstellar conspiracy cherish doubts about its origins. But it is still out there, and now defeated Solarians and agents of the victorious Alliance must join forces to find it. Even if they don't believe in it, it believes in them.

They must find it and identify it, to prove to revanchist Solarians that there was a conspiracy.

And they must find it and destroy it to end its evil once and for all.

The Crown of Slaves Honorverse Series:

What listeners say about To End in Fire

A good book but we want more) the battle at the end disappointed, we are waiting for the continuation of the story

First off, I'm confused about all the reviews calling this the end. without spoilers, the story isn't wrapped up and the ending sets up the next layer of the story fairly explicitly it seemed like to me.

I enjoyed it, and if you've read the stories this far and enjoy them, you'll probably enjoy this as well. It's not groundbreaking, the protags are mostly learning things we already know, though there is some new info and new nuance coming to light. All in all, i enjoy the overall story and this is part of it.

superb conclusion of Honor Harrington series
It wraps up the destiny of the Alignment,
and shows the basis of Manticore's
superior moral structure And reconclies
the enemy planets.

The quality of this series is unsurpassed , In-depth and scope , sci-fi at its best .

Considering how I felt about the last novel, Uncompromising Honor, felt like so many moving parts had to be put in place. That any movement forward for this story need to move these pieces around enough to justify how things ended.

This book was the same. Well over 2/3 of the book were need for you to know by the end we are attacking. And last little tidbits felt like ash in the mouth.

I don’t know if the author just needs to give the people some Honor Harrington, while barely building up new characters, and moving existing characters with out any thought. We need everyone to meet up, so everyone knows everything and then we can attack.

I read a long time ago how Weber was going to kill off Honor but didn’t. That he was going to start another series in the universe about spy’s but I think that just got grouped up now. It was there, two separate series but still in the same universe. Maybe the publishers said it does not feel the same and no one would like it.

Either way, this series is just a running log of oh, the star empire has the best weapons, well so do these guys they are just evil and that’s that but then they aren’t that evil and they had no idea they were this bad. SMH I was going to give this a two star but after writing this review it’s one star.

Performance was good. But seemed like the guy was even getting tired of the same b/s being said.

Love catching up, and closure; but there needs to be some ‘beef.’ This was many hours of chats at ‘starbucks’, an elevator or the golf course. Even meetings were totally casual. No intrigue, fights between ambitious peers. Just endless dialog I often faded out of to find I’d been tuned out for an hour or more but didn’t miss a thing.

Great wrap-up as far as the wrap-up goes.

Ties together many threads from multiple books. Well executed. As always some variations in pronunciations.

This Turkey ends the Honorverse me

There is no point in listening to this book. If you are looking for a grade climax you are not going to find it here. This ends the Honorverse for me. Weber’s infrequent marathon books are now to tedious to continue with. The reader on this is jarring if you are used to earlier readers.

Don’t get me wrong the book was fine but really was expecting more. Side characters and stories were introduced and seemingly abandon. Many threads left open and unresolved and the last battle was silly in how tactics were not anticipated by the GA. Anyway not sure if there will be more books but the story is far from resolved.