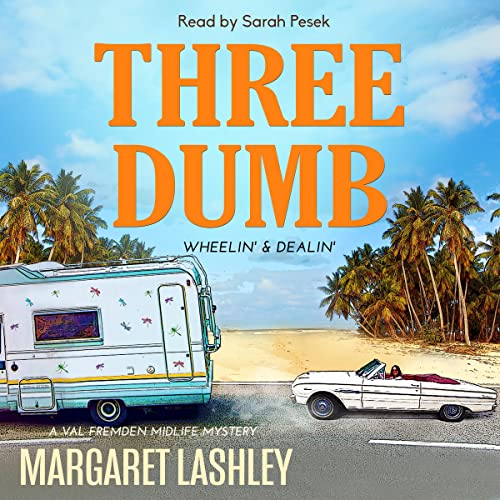 By: Margaret Lashley
Narrated by: Sarah Pesek
Try for £0.00

They say three’s a charm. But charming isn’t Val’s style.

Val Fremden is a lot of things. Quirky. Jaded. Disaster-prone—to name a few.

But more than anything, she’s afraid of commitment.

So it's no wonder that when boyfriend Tom tells her he loves her, Val plays it cool. But when he accidently hauls her mom’s ashes to a junkyard, Val loses it like Chernobyl 2.0...

On the warpath with Tom, Val turns to her wacko, low-rent friends to help track down her mom’s cremains. But three botched stakeouts and two disasters later, she still hasn't got peanuts. Through trial (but mostly error), Val discovers it's not easy to outwit a mobile master of disguise while driving around a paddy-wagon full of nutcases.

Three Dumb is a satirical look at how life, over time, changes our perception of love and the things we value. It’s told through the eyes of a snarky, middle-aged woman with legendary commitment issues and a gnawing reluctance toward romance.

The characters in this series are hilarious and endearing. I've really enjoyed them so far.

These stories seem to get better with each book! I am excited to continue this series!

This time Margaret Lashley relied too heavily on making fun of people and expressing disparaging opinions about weight and social class distinctions. I wasn’t amused. I finished thinking maybe that somehow Val was supposed to learn some kind of life lesson and emerge a kinder less judgmental person but no.

I love this series! Fun lighthearted reads. The characters feel like family! You will enjoy them.

I was really trying to get through this series. As as someone who is in midlife and is female... I thought I would be the target audience. But the constant talk of butts, poop and farts makes it more fit for a 12 year old boy. I gave up after a couple hours of #3.

I absolutely love all the surprises of laughter!! It is everything I was wanting mystery, suspense and out of the world laughs I never expected!!!

My sister recommended these books and I wasn’t disappointed. Great author and great reader. I totally recommend this series.

Loved the mystery, suspense and humor! The characters were wonderful. Laugh out loud fun! Worth the time.

Such a fun read! I love this series. Everything about it is great fun. The narrator is perfect, the storyline is perfect. I listened to it almost non stop it was so good. It was laugh out loud funny!