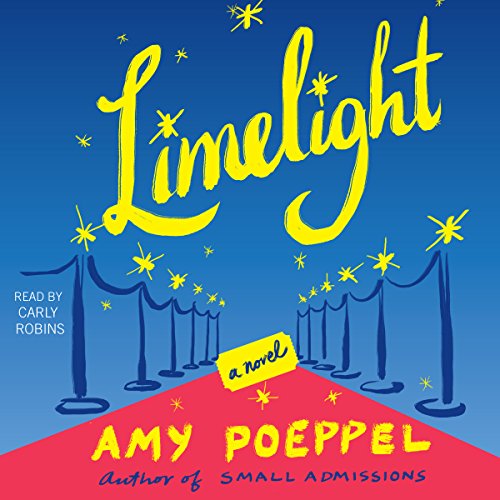 By: Amy Poeppel
Narrated by: Carly Robins
Try for £0.00

In a smart and funny new novel by the author of the critically acclaimed, “big-hearted, charming” (The Washington Post) Small Admissions, a family’s move to New York City brings surprises and humor as their lives merge with the captivating world of Broadway.

Allison Brinkley - wife, mother, and former unflappable optimist - discovers that a carefully weighed decision to pack up and move her family from suburban Dallas to the glittery chaos of Manhattan may have been more complicated than she and her husband initially thought.

Allison learns that New York is unruly and bewildering, defying the notions she developed from romantic movies and a memorable childhood visit. After a humiliating call from the principal’s office and the loss of the job she was counting on, Allison begins to accept that New York may not suit her after all.

When Allison has a fender bender, witnessed by a flock of mothers at her son’s new school, she is led to the penthouse apartment of a luxurious Central Park West building and encounters a spoiled, hungover, unsupervised teenager who looks familiar. It doesn’t take long to recognize him as Carter Reid - a famous pop star who has been cast in a new Broadway musical. Through this brush with stardom, Allison embraces a unique and unexpected opportunity that helps her find her way in the heart of Manhattan.

In an audiobook that delivers laughs, warmth, and delightful wish fulfillment, Poeppel dives into celebrity culture and modern motherhood with her trademark “quick-witted and razor-sharp” (Taylor Jenkins Reid, author of Maybe in Another Life) style.

What listeners say about Limelight

I bought the audiobook based on a newspaper review. I am so glad I did. It is so good: funny, thoughtful, entertaining. It is a book that you can read and finish with a smile on your face and in your heart. The narrator is perfect.

I loved this book for a few reasons. One I love New York and everything about New York. It was a funny light read. This is the exact type of book I prefer to read. No graphic sex scenes and no stupid outlandish fake romance crap. This was about learning to find yourself in New York while dealing with an obnoxious child like person. I don't want to give away any spoilers. The obnoxious person did kind of make me mad at times but isn't that the whole point of the book? To evoke feelings, good or bad? This was definitely a win for me and I will be looking to read more books by this author.

Lastly, the narrator was fantastic! She was great at the different voices. I will definitely look out for books that she has narrated.

I almost didn't purchase this book. I've purchased so many duds, and books that I couldn't finish; but this one was a delightful surprise. Fun story, that held my interest all the way through! I definitely recommend.

Listened to the entire book waiting for a redeeming quality to appear with any of the characters. Never came. Honestly kept waiting for there to be something likable. Yes there was supposed to be a bratty character, but the other main character was even worse, and we were supposed to admire her for some inexplicable reason. Even side characters were terrible and unlikable. Exasperating.

I loved this book...loved the characters and the setting. I highly recommend this book!

Great performance! Not a great book

I loved Amy P’s Musical Chairs and was hoping I’d feel the same about this novel… the narration was superb. I agreed with other reviews on that and gave her a solid 5 stars. Really impressive!
I enjoyed all of the supporting characters but grew really tired of the character of Carter and his flaws throughout. It made the journey of the story less enjoyable for me. I hope Amy’s next book has less pretentious and more likeable main characters. Honestly as much as I enjoyed the supporting characters, I was in a hurry for it to end. I listened all the way through hoping for a bigger shift in the arc of the story. I’d already spent my credit and didn’t want it to go to waste.

I am always looking for humorous books and although it was not laugh-out-loud-funny, it was very clever and entertaining. I loved the lead character. It is about so much more, but one of my favorite takeaways was about the friends you make in unexpected ways and how a stranger's support can make a difference in someone's life--I am making the plot sound way more serious than it actual is--this might be part of its genius.

The story seemed to drag on and on. Quickly lost interest. Would have been easy to leave some parts out to keep interest

This was an okay novel, not super bad but not great. Too much useless foul language and story is hard to believe. The narration was difficult in spots, could be my earbuds but think it would have been bad whole way through if that was the reason.