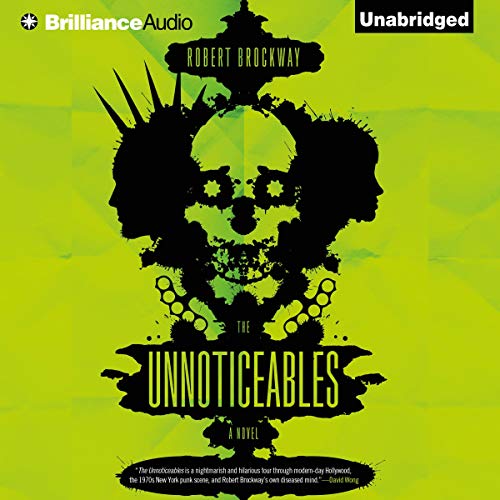 From Robert Brockway, Sr. Editor and Columnist of Cracked.com, comes The Unnoticeables, a funny and frightening urban fantasy.

There are angels, and they are not beneficent or loving. But they do watch over us. They watch our lives unfold, analyzing us for repeating patterns and redundancies. When they find them, the angels simplify those patterns and remove the redundancies, and the problem that is "you" gets solved.

Carey doesn't much like that idea. As a punk living in New York City, 1977, Carey is sick and tired of watching strange kids with unnoticeable faces abduct his friends. He doesn't care about the rumors of tar-monsters in the sewers or unkillable psychopaths invading the punk scene - all he wants is to drink cheap beer and dispense ass-kickings.

Kaitlyn isn't sure what she's doing with her life. She came to Hollywood in 2013 to be a stunt woman, but last night a former teen heartthrob tried to eat her, her best friend has just gone missing, and there's an angel outside her apartment. Whatever she plans on doing with her life, it should probably happen in the few remaining minutes she has left.

There are angels. There are demons. They are the same thing. It's up to Carey and Kaitlyn to stop them. The survival of the human race is in their hands.

We are, all of us, well and truly screwed.

What listeners say about The Unnoticeables

Thoroughly enjoyable from beginning to end!

The Unnoticeables is comprised of three different stories. The first is told from the perspective of a deadbeat punk, living in New York City, in the late 70's. The second is a stunt woman / waitress in Los Angeles, in 2013. The last story is from an unnamed narrator, in an unknown time.

In each story, there are several creatures, The Angels, the "Empty Ones", the "Tar Men" and the titular Unnoticeables, all of which ultimately serve a being called 'The Engineer'.

As the novel progresses we learn the motives of these creatures and how the three different stories interlink. Without giving too much away, there are revelations about humanity, existentialism, abjection, etc, so if like David Wong's stuff, this will be up your alley.

Even if you are my familiar with Wong, or don't like his stuff, I would still recommend this novel. This is because Brockway excels in his description throughout this book. He paints a more vivid picture than Wong, or indeed a lot of other authors I have read / listened to.

In particular, the way in which Brockway describes some of his horror scenes is particularly harrowing! Again, without spoiling it, there are more than a few moments that had been grimacing or gasping. There is one scene, and you'll know it when you reach it, which takes place at a party in a mansion in Los Angeles, which will stick in my mind for a long, long time!

Thoroughly enjoyed The Unnoticeables and would read other work from Brockway!

Trying to hard to be funny and interesting

Unfortunately I found the story boring. It spent too long building to the crescendo. It tried too hard to be funny, offering frequent overly graphic quips, which felt like fillers in the end. The merging timelines were well done. I liked the story of the stunt woman more than the tramp, but unfortunately the story was mainly about the tramp and his friends. Overall, I think the story could have been shorter if some of the filler faff was removed and combined with the sequel.

fantastic from start to finish

great story that im amazed isnt a film yet. well performed and had me buying the next book straight away

Great concept but left me wanting. You keep waiting for some clarity, an explanation of exactly what is going on. I don't expect everything to be tied up in a little bow, but this left me feeling disgruntled. Not sure if there is a sequel, but it needs one. It's a mental "coitus interuptus".

Gore, Profanity, and Fun, Oh My!

Don't expect a whole lot of thought-provoking plot here, okay, folks? We're talking action. Don't expect much in the way of fully-fleshed out characters with grand, sweeping arcs. How about a guy who battles zombies (okay, okay, they're called "empties") but really just wants to get laid, or a girl who doesn't wanna have a metal instrument crammed down her throat and would like to make it as a stunt woman in Hollywood, if you don't mind.
There are twists here, blood and guts, humor and smart-assery galore. And if you don't take it all so seriously, it's definitely worth a Daily Deal.
Yeah, it does end on a Gee, Think There's Room for a Sequel? note, but if there IS a sequel a) I would indeed like to see a bit more put into it to satisfy the thinking man/gal, and b) a bit more character development. That would make it beyond credit-worthy too!

I WAS LOST IN A FORREST OF AHOLES
You've heard, he cusses like a sailor? I grew up with a sailor as a dad, and bad language does not bother me. This is full of swearing, sex innuendoes, gore, humor and losers. The first eleven chapters deal mostly with the punk losers, sort of Beevis and Butthead types. It is full of a lot of sarcastic LOL jokes, often sex related. I was in High School when punk got started and no one I knew understood it. It was a very minor group of people who did not seem to like themselves.

YOU'D HAVE TO DIG A HOLE FOR THIS APARTMENT TO QUALIFY AS A SH@% HOLE
In chapter 12 we start to get a little explanation of what is going on. It makes you hungry to find out more of what is going on. The whole book is not just silliness, there is actually some intelligence behind the writing. Towards the end when we should have been finding out what was going on, the book goes into pyro technics and all meaning is lost. I would have liked to have understood more of what was going on. This seems to be set up for a sequel, but I don't believe I should have to buy another book to find out what I should have in book one.

I will say that this is not same sh@% different toilet, this is a lot different from most of what I have read. The closest I have come to it would be Rant by Chuck P.
Narrator was pretty good.

This book has a david wong style with its own feel. Very imaginative. Can't wait for more . In my top 5 adiobooks of the year.

I loved it, so punk

The noble nature of a nihilist punk and his quest to just do whatever so pleases against the unstoppable cosmic forces conspiring against him.

Think like Lovecraft and hip and several different times. Some actions seem like they don't make sense according to the character's motivation and knowing what they know it seems like it would be smarter to say something to the other person. Read it.

I still don't get it. too much bad language. swear words are not a substitute for good writing. it doesn't make it gritty and real it just distracts from the incomprehensible storyline

I found the story entertaining; not a classic work of fiction, but it held my attention.

The voice performances were lifeless and droning. Most of the time the lilt and tone of the actors was more like teachers reading to a 3rd grade class during story hour and not to an adult audience.

The story is worth your time, but you will have to tune out the actors' generic text recital.

I didn't get it

the script was sophomoric. it was entertaining, but I really didn't get the point of the story

A cast of unlikable asses doing unintelligible or unappetizing things. I can read almost anything if it's well written but this is beyond my tolerance for worthless pointless characters.