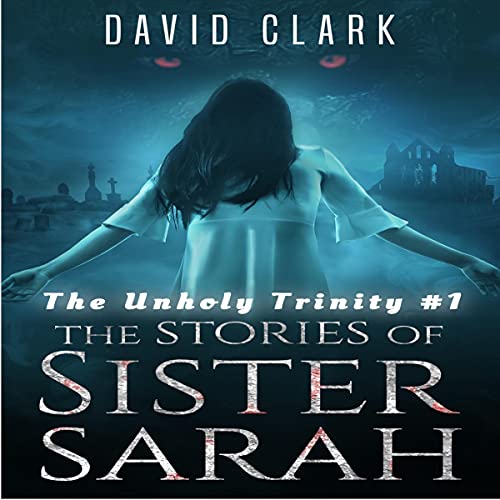 By: David Clark
Narrated by: Joan Dukore
Try for £0.00

Sarah Meyer has lived a rather interesting life. Conjoined with a Demon that won't let go, she has been under the protective custody of the Sisters of San Francesco. Under the guidance of her mentor, Father Lucian, she helps solve some of the world’s most terrifying paranormal mysteries. These are her stories.

The Unholy Trinity, Book One is the collection of the first three books The Stories of Sister Sarah series.

The Italian island of Poveglia is knowns as the most haunted place on the planet and is off-limits to the public. A recent visit by two wayward teenagers has brought a harsh reminder of the terrors that exist on the island. They assign Father Lucian and his reluctant protege to solve, and take care of the mystery. Will they find anything other than an old ghost story? Can Sarah control the demon that lives inside, or will it once again take control?

Whispers of the Dead

St. Augustine, Florida, is the oldest city in the United States. It is only natural that a place that old, with a history marred by battle and piracy would be surrounded in ghost stories. It is not one of the old legends they caused Sarah and Father Lucian to be called. Instead, it is a contemporary paranormal intrusion from the 1940s that recently reached out and touched the world of the living, costing one poor soul their life. Can Sarah solve the mystery and restore the peace?

A natural disaster with an unnatural origin, toppled the thousands of crosses that adorn a hill outside Šiauliai, Lithuania, breaking a sacred seal that had entombed a devilish creature that terrorized this small town eons ago. Father Lucian and Sister Sarah rushed to help another bringing Sarah to her first encounter with two of the "keepers" that battled her in the woods in Miller's Crossing. Sparks fly and trusts are frayed, but in the end they must be thier differences together for the same common cause. When it is not enough, Sarah is left with one option, an unforgivable one. Sometimes it takes a beast to defeat a beast, but at what cost?

What listeners say about The Unholy Trinity, Book 1

I was given this free review copy at my request and have voluntarily left this review.
Good

very different quite a good story
the narrator was ok but I think she should have not been so softly spoken for this book.

Good vs. Evil with a little help from a Demon

Sister Sarah is possessed by a Demon but has managed to live with it, with some help from her friends. She has taken on all manner of evil spirits in her 85 years. This book is recollection of those battles. Extremely entertaining but not really that spooky or scary. Just sit back and enjoy!

The Unholy Trinity, Book 1 is definitely one for the books as it describes a possessed Sister Sarah and her treks of dealing with the paranormal. I found this book to be very well written with great character development. The stories are descriptive, creative and yet horrifying to say the least especially when she was on Italy's most famous haunted island of Poveglia. I absolutely enjoyed this book and would definitely recommend it highly. I am voluntarily leaving this honest unbiased review of my own volition.