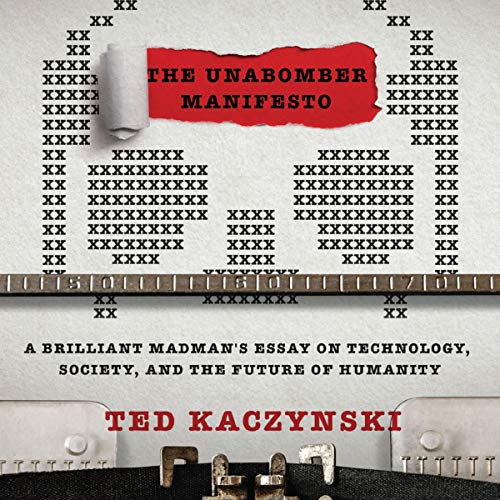 By: Ted Kaczynski
Narrated by: Jim D. Johnston
Try for £0.00

On September 19th, 1995, the New York Times printed an essay by a known terrorist in a desperate attempt to stop his string of civilian bombings.

The newspaper’s editors dismissed “The Unabomber” as a lunatic, but his essay soon began to capture the attention of the world’s wisest political minds. As The Atlantic wrote: “[The essay] was greeted...by many thoughtful people as a work of genius.”

"Reprehensible for murdering and maiming people...but precisely correct in many of his ideas.” (Keith Albow, author and psychiatrist)

“If it is the work of a madman, then the writings of many political philosophers - Jean Jacques Rousseau, Tom Paine, Karl Marx - are scarcely more sane." (James Q. Wilson, professor of political science, UCLA)

“[He] was right about one thing: technology has its own agenda.” (Kevin Kelly, founding executive editor of WIRED)

As the decades have passed since the essay was published, the truth behind the author’s warnings have become harder to ignore.

Predicting society’s present addiction to technology, our challenges with data privacy, and the dramatic increase in drug overdoses and depression that have accompanied a technology-induced lack of purpose, The Unabomber’s vision of the future has become our reality.

Of course, his means were disgusting and condemnable. But his message is more important than ever.

If we want to thrive in an age where automation and artificial intelligence and rapidly making humans obsolete, it is our responsibility to understand and prepare for the technological machine we are up against.

What listeners say about The Unabomber Manifesto

it's a shame this guy went the wrong way. it's a great book that rings true considering what our leftist Marxist go government is doing

This book is brilliant

I don't often get into books of this nature, but wow. I will be listening again on the plane ride home. Would highly recommend.

I've always heard about this book but never knew what it was about, only about his horrible terrorist actions. After listening, he's obviously brilliant and it seems like the future he predicted is coming true. Not sure where that leaves us, but it's interesting to think about...

While I didn’t find the writing style particularly brilliant, the content was rather intriguing, especially considering that it really isn’t about his unlawful acts at all.

Has a few interesting points, especially about the problems of modernity, technology and genetic modification but he overly idealizes primitive life. Most the book is just a series of claims without backup and an angry rant against what he sees as the Left even though he has trouble defining exactly what that is. I was hoping for more eloquence, better thought points and the like, but it was all just claims.

I didn’t care for the narrative or the ideas presented. I only made it a few minutes in before checking out. No thank you.

Ted Kaczynski is cogent in his manifesto. Many despots write with far less clarity about social implications of a rush to technology. He’s on point and broad in his scope. His error is that he’s unkind, unloving and unloved and eventually bitter and malevolent in a small minded and pernicious way. He ended lives, accomplishing little and creating a searing anguish for families and victims.

The narrator, Mr. Jim D. Johnston, did a very good job in reading this manifesto.

Sad Ted himself couldn’t do the audio recording but a very interesting read nonetheless. 10/10

Narrator whistles when he speaks

Kind of distracting. Otherwise good. Writing is accessible but you might find yourself confused. Bye

This book has so many great points regarding modern man and his ancestors. It is insane how applicable the information in this book is to my daily life. Not only did this reading allow me many realization, but it also helped me deal with some stress from the workplace and elsewhere. 10 out of 10 recommending to anyone utterly fed up with the BS of society.