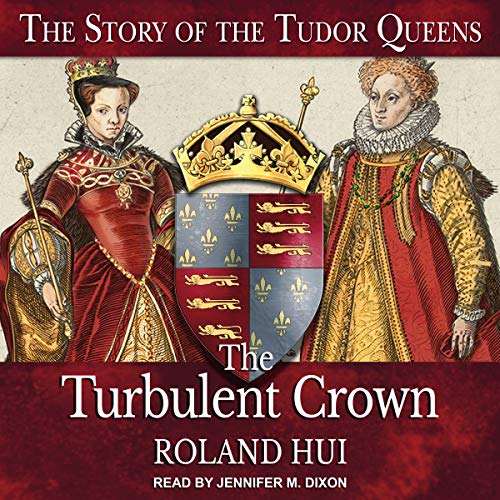 In the Tudor period, 1485 to 1603, a host of fascinating women sat on the English throne. The dramatic events of their lives are told in The Turbulent Crown: The Story of the Tudor Queens.

The Turbulent Crown begins with the story of Elizabeth of York, who survived conspiracy and dishonor to become the first Tudor queen, bringing peace and order to England after years of civil war. From there, the listener is taken through the parade of Henry VIII's six wives - two of whom, Anne Boleyn and Katheryn Howard, would lose their heads against a backdrop of intrigue and scandal.

The Turbulent Crown continues with the tragedy of Lady Jane Grey, the teenager who ruled for nine days until overthrown by her cousin Mary Tudor. But Mary's reign, which began in triumph, ended in disaster, leading to the emergence of her sister, Elizabeth I, as the greatest of her family and of England's monarchs.

What listeners say about The Turbulent Crown

the subject of the Tudor Queens is a truly fascinating one but alas the same cannot be said for the narration. the facts are presented in an easily understood and not too technical manner and the authors interpretation of them is corherent. BUT the narration is a flat drone. and dispite the fascinating subject this recording would make a good cure for insomnia.

this book and narration went well together.
it is not common to have a straight female lineage tudor story. well written.

Complicated Rivals and sisters to the end.

Loved it. Great details of complexities and challenges of court in England and Scottlands reign.

Stuck with it; Couldn't Stop Listening!

A great example of how narration can elevate a story! This is an expertly-researched book that, frankly, I would have skimmed over in the library or bookstore. I'm so glad I chose to give it a shot in audio-version; the story is so fascinating and so well-performed that it becomes a treat to listen to. If you're a fan of history, please don't pass this one up!

Book Title Says It All

This is an interesting distillation of the history of the Tudor Queens. Much of it will be familiar to most people, but there is a considerable amount of background information on some of the lesser known wives of Henry VIII. Anne of Cleves and Catherine Parr, for example, generally get short shrift in favour of the more spectacular of Henry's wives, such as Anne Boleyn and Katherine Howard. Author Hui delves into the background of the parade of many of Henry's women, wives and otherwise.

Lady Jane Grey's sad tale is generally wrapped in misinformation, thanks to movie makers who never let facts get in the way of a good story. Author Hui clarifies much of this Hollywood fiction and gives us a look at the unfortunate teenager who found herself caught in the political crosshairs of palace intrigue.

Elizabeth's half sister Mary, who eventually earned the well-deserved moniker of "Bloody Mary", receives surprisingly gentle treatment. Her reign of bloody terror is lightly skimmed over while her religious convictions and principles of governance are examined in some detail. Unfortunately, Mary seems not to have noticed that her devotion to God was in direct contrast to her butchery of non-compliant subjects.

Narration is OK, except for the odd mispronunciation that rattles the ear, e.g. "fur-oar-ee" for furore. Makes me wonder how many words slipped completely past me because Dixon didn't check the correct pronunciation beforehand.

The narrator’s mispronunciation of Chapuys drives me nuts but otherwise great book. Lots of good history and overall a pleasant performance.

Very interesting and informative, this is definitely my favorite genre! Will be looking forward to seeing more from him