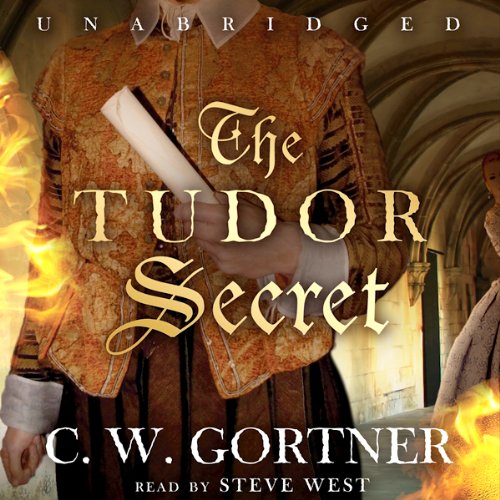 The era of the Tudors was one of danger, intrigue, conspiracy, and, above all, spies.

The summer of 1553 is a time of danger and deceit. Brendan Prescott, an orphan, has been reared in the household of the powerful Dudley family. Brought to court, Prescott finds himself sent on an illicit mission to the king’s brilliant but enigmatic sister, Princess Elizabeth. But Brendan is soon compelled to work as a double agent by Elizabeth’s protector, William Cecil, who promises in exchange to help him unravel the secret of his own mysterious past.

A dark plot swirls around Elizabeth’s quest to discover the truth about the ominous disappearance of her seriously ill brother, King Edward VI. With only a bold stable boy and an audacious lady-in-waiting at his side, Brendan plunges into a ruthless gambit of half-truths, lies, and murder.

Filled with the intrigue and pageantry of Tudor England, The Tudor Secret is the first book in the Elizabeth I Spymaster Chronicles.

What listeners say about The Tudor Secret

I've READ Gortner's other books and enjoyed them. I'm not sure if this was good. I think it was, but the reader trashed it. He made it seem melodramatic and implausible, but the text itself was fine. If this becomes a series, please select a different reader. If it's the same one, I won't bother. If it's a different reader, I'll give it a go.

I'm sure it's a good story but narrator was so bad I stopped after two hours :(
Nothing else to say

I'd recommend the story for a light read, but not this audio book. Better to read it yourself.

Did not finish it because of the narration

Would you be willing to try another one of Steve West’s performances?

Absolutely not. Mispronunciation of simple words and place names was irritating and detracted from the story. The voices were awful and it would have been better if he hadn't tried.

Did The Tudor Secret inspire you to do anything?

Inspired me to write this review - I've never done one before

I can't find anything good to say about this title. As a big fan of the C J Sansom Tudor novels, which are rich in character, brilliantly plotted and feel very authentic, I found this novel less than satisfying. If you're a Sansom fan, steer clear of this one. There are occasions when the narration rescues a mediocre title to being almost bearable but I'm afraid that isn't the case here, either. I was constantly being annoyed by odd stresses and outright mispronunciations. I was glad when it was over.

What can I say apart from a dam good read, gripping, exciting and with lots of twists and turns and just very enjoyable.
I hope there are many, many more to come.

When I first started listening to this audio book, I must confess to being rather irritated by the narrator as he didn't seemed to be incapable of reading in a normal voice. Everything is spoken with an ironic twist _ even when he's simply describing the scenery! However, the story is excellent and I was drawn into the plot because of it. The narrator's idiosyncrasies began to irritate me less because the story is so good and I will try another in the hope someone has taught him how to read!

The narrator, as others have commented, was quite annoying at times - some particular character voices were agonising to listen to, as well as mispronunciation throughout, especially regarding a couple of place names. The story however was easy to listen to, not necessarily the best of the bunch but quite enjoyable, would recommend if you enjoy stories relating to the Tudors.

Great story and well read. I liked the characters good blur of fact and fiction.

The tumult of Tudor England brought to vibrant lif

This fleshed the bones of the history of Tudor England. Dark and duplicitous times.

I've always been fascinated by Henry the 8th and the period after his death. The enmity between the church of England and the Catholics has been the subject of much writing and I've read some. If you are ignorant, this might not be the book for you. If, as I am, you're a history buff, go for it.
While reading, I learned quite a bit about this period since much of the book is based on fact, all but the main character. It's a wonderful story, if a bit confusing with all the Lords, Dutchesses etc. If you read it, I would use some reference material (I confess I used Wikipedia) to keep the folks straight.
Plots and counter plots abound and make for a really enjoyable narrative.

Although this is fiction, much of it is historically correct, and I found myself mesmerized by the manners and ways of the English Tudors. Politics have been corrupt from the beginning of time . . . and yet, a thread of the good and honorable also persisted. The conflict between Protestants and Catholics during this period in history is particularly interesting to me, and that this would be such a point of contention regarding who sat on the throne of England is surprising. The narration is just right, carrying the listener away to a distant time and land of knights, kings, and queens . . . and dungeons with evil doers lurking around every corner. . . an almost fairy tale existence . . . I am looking forward to listening to the second in the series.

Where does The Tudor Secret rank among all the audiobooks you’ve listened to so far?

Have you listened to any of Steve West’s other performances before? How does this one compare?

I have not listened to Steve West before but he did a great job.

Who was the most memorable character of The Tudor Secret and why?

Peregrine of course was the best character.

For the folks at Audible, if you offer a great price for "the first book of a series" make sure you have the rest of the books.

I was not very well-versed in this time period of England and enjoyed learning about King Henry VIII and his offspring. The treachery at court and the jockeying for power left you not knowing who to believe. I enjoyed the main character and the mystery surrounding him. I do have a few words of caution. This time frame doesn't seem to be filled with the highest moral character. There is one sex scene. It is not overly described and is thankfully very brief. If Brendan ever sends his friend, the stable boy, out of the room when he is reunited with his lady friend, you could skip several minutes and miss the whole thing. There was one f bomb in the whole book. I don't think that word appropriate to the time period. Really, a little over 100 years ago if you said something like "Devil Take It!" or "Blast it!" They were considered swear words. I just thought that was entirely out of place. The story is interesting; the time period, fascinating. The narration was good as far as I could tell. I was really sucked in quickly and finished it fairly quickly. I knock off stars for the above two things, but overall I enjoyed the story.

Beautiful narration of a totally implausible story. Little understanding of the social norms and behaviors of the day.

I like historical fiction but this ho hum book doesn't fall into that category. Yes, it takes place during Elizabethan times and yes, The Princesses Mary and Elizabeth actually lived . My problem is with the main charaacter being fictional and the situation which the book revolves around is too. It's a nice light romantic read but I didn't learn anything from it.

Entertaining, "what if?" Tudor story

A good book, set amongst the factual events of Lady Jane Grey's brief rise this is a good story however the main story line is pure fiction. A good listen, my preferences lean toward more historically accurate events, but this was entertaining. The imagery and nuances of the age are spot on.

wish it was a longer series

Steve West is Brilliant. his talent of Story telling is incredible. His performance is fantastic. The Story was interesting and amusing.

Love love loved this story. Kept my workdays entertaining and loved the narrator. I will be seeking out this author.