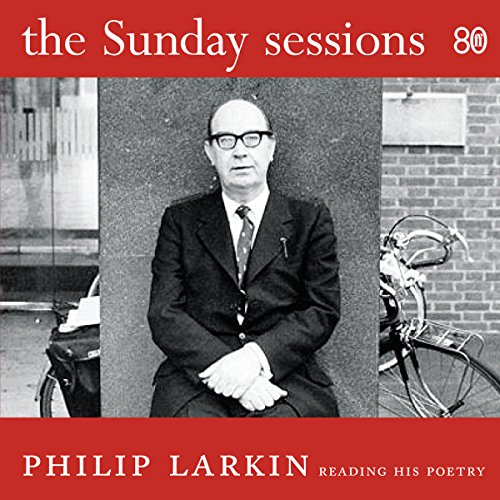 A collection of Larkin's best-known poems, read by the poet. The Sunday Sessions consists of 26 poems, the contents of two tapes recorded by Philip Larkin in Hull in February 1980 - reportedly each on a Sunday, after lunch with John Weeks, a sound engineer and colleague of the poet.

The tapes, which contain work from Larkin's first major collection, The North Ship, as well as poems from his best-known collections, The Whitsun Weddings and High Windows, remained "lost" for over two decades, lying on a shelf in the garage in which they had been recorded.

Since their rediscovery they have been the subject of widespread media attention, including a BBC Radio 4 Archive Hour documentary. Their contents are here published in full for the first time. Larkin's reading captures each poem with great clarity of speech and with a plainness which serves only to enhance the work.

The Sunday Sessions presents a remarkable overview of Larkin's writing career, but above all it is to be heard for the pleasure it offers, and for the opportunity it provides to encounter Larkin's work afresh.

"[Larkin] is a fine, illuminating reader, springing the surprise of little surges of lyricism amid the colloquial observations of provincial life." (Carole Mansur, Daily Telegraph)
"They are relaxed readings, a self-selected 'retrospective' in which one senses that Larkin has chosen poems of which he is particularly fond. He sounds less self-conscious than in more official recordings, perhaps lubricated by a good lunch, perhaps happy not to have an audience, with all its coughs and chair-scrapes and visual distractions. He includes the singingly Yeatsian Within the dream you said from his first collection The North Ship, published when he was only 23, and before he discovered the dryly sardonic voice of Mr Bleaney and Vers de Societe. But he ends with a return to romance: the magnificent 'An Arundel Tomb' - 'What will survive of us is love'." ( The Times)

What listeners say about The Sunday Sessions

I’ve listened to countless poetry readings. Philip Larkin’s Sunday Sessions is, for me, the most rewarding—infinitely repeatable. Humane, unsentimental and touching.