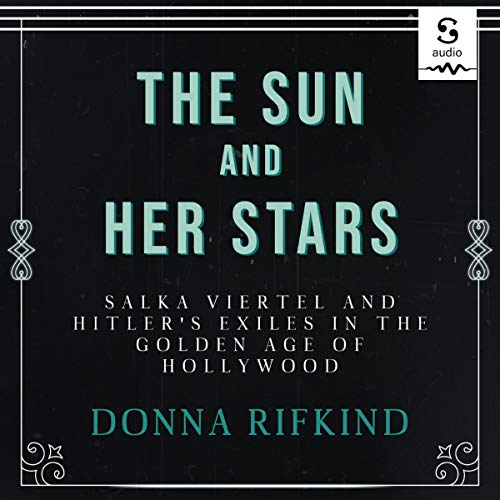 The Sun and Her Stars

By: Donna Rifkind
Narrated by: Heather Henderson
Try for £0.00

The little-known story of screenwriter Salka Viertel, whose salons in 1930s and 40s Hollywood created a refuge for a multitude of famous figures who had escaped the horrors of World War II.

Hollywood was created by its “others”; that is, by women, Jews, and immigrants. Salka Viertel was all three and so much more. She was the screenwriter for five of Greta Garbo’s movies and also her most intimate friend. At one point during the Irving Thalberg years, Viertel was the highest-paid writer on the MGM lot. Meanwhile, at her house in Santa Monica she opened her door on Sunday afternoons to scores of European émigrés who had fled from Hitler - such as Thomas Mann, Bertolt Brecht, and Arnold Schoenberg - along with every kind of Hollywood star, from Charlie Chaplin to Shelley Winters. In Viertel’s living room (the only one in town with comfortable armchairs, said one Hollywood insider), countless cinematic, theatrical, and musical partnerships were born.

What listeners say about The Sun and Her Stars

The Sun and Her Stars

An exquisitely written and researched biography that brilliantly weaves together a complex history. Rifkind masterfully depicts the cultural collision between Old Europe and Hollywood. A must read for anyone who wants to get a sense of Southern California's history, landscape, and the influence exiles had in shaping them. Alas, the narrator does not do Rifkind's work justice--while her narration is comprehensible, her repeated mispronunciation of foreign and English words is extremely grating. Someone reading this type of book should know that it's Porgy, NOT Porgie in Porgy & Bess! Covering a diverse, cultivated set of people, The Sun and Her Stars deserves a more culturally literate narrator. Well worth listening to, but the superb narrator of Viertel's memoirs, "The Kindness of Strangers," shows what a shame this flat narration is. Hers is wonderful companion to this book--she deftly captures the foreign accents and better reveals the cultural differences between Hollywood and Europe.